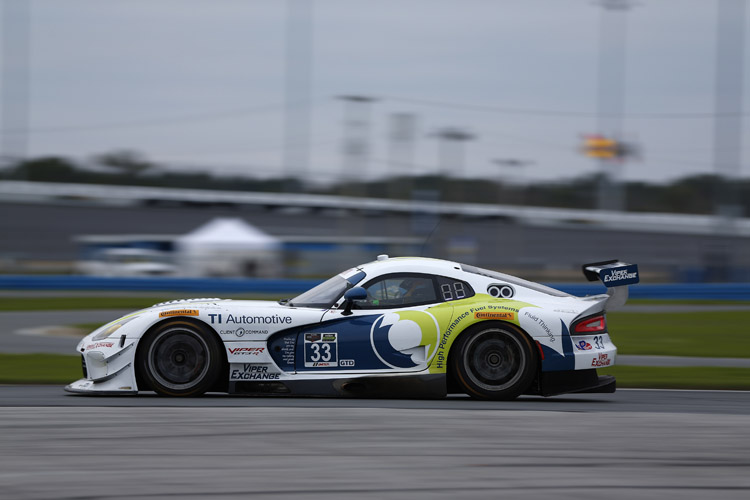 Riley Motorsports are pleased with the results of the three day ROAR Before the 24 at Daytona International Speedway. The former SRT Motorsports outfit relaunched their TUDOR United Sportscar Championship effort at the Rolex 24 at Daytona prelude event which marks the start of the US sportscar racing season. The t    eam were left without a programme after Street Racing Technologies, the sports arm of Chrysler/Dodge withdrew factory support for the GTD Viper.

The new tie up with TI Automotive and ViperExchange.com was announced at the Florida circuit on the Friday of the test.

Both the #33 and #93 Viper GT3-R race cars performed well during the eight session test, coping with the wet weather which arrived on Sunday despite the event also representing the Viper GT3-R’s Daytona debut. Marc Goosens set the fastest time of all GT Daytona class cars on Friday afternoon when he posted a 1:46.948. Goosens set the pole time for the 2014 Rolex 24 at Daytona in the GTS-R spec GTE Viper.

“I’ve always liked Daytona, but there are a lot of good drivers out there and a lot of people working hard right now to come back here in two weeks and get the pole,” Goossens said. “Hopefully we have something for them, but most importantly we need to be there at the end of the race and try to get that watch.”

Goosens will share the #33 Viper with Ben Keating and Jeroen Bleekemolen, neither of whom made it to the ROAR. Sebastien Bleekemolen shared the #33 with Goosens for the ROAR while his brother raced in the Hankook 24h Dubai. Al Carter shared the #93 machine with reigning GTD champion Kuno Whittmer, Dominik Farnbacher and Cameron Lawrence. The #93 took the second fastest time of the weekend.

Farnbacher, who has been with the Viper programme since it’s inception, said, “It was a great experience to come back here with almost the same people we had last year. A lot of the same faces, the same mechanics and almost the same car. It is a GTD car now, different tires, different engine, different gearbox, everything is GTD spec now, but it seems to work very well. Our development paid off and the test was very good. We tried out different settings and all of the different drivers just to get them comfortable in the car and they all did a good job. We are more than positive that the race will end pretty well.”