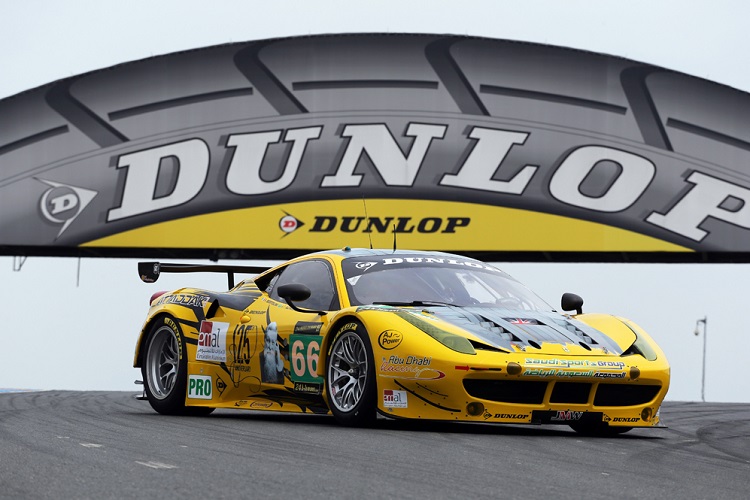 Dunlop has become the official tyre supplier to the GTE and GTC classes of the European Le Mans Series (ELMS) after signing a new partnership with the ACO.

The deal will involve the creation of a new range of Dunlop Sport Maxx GT tyres that will be tailored specifically for GT racing, beginning in 2015.

The three-year deal comes after Dunlop suggested that it would be increasing its involvement in international GT racing (October).

Furthermore, Dunlop will continue to supply tyres to its current LMP2 customers.

Having won the 24 Hours of Le Mans on 34 occasions (more than any other tyre manufacturer) Dunlop is one of the most revered names in motorsport. Its history of success continued last year when 2014 ELMS champions Signatech Alpine achieved their second overall title in a row, using Dunlop as supplier.

“Dunlop and Le Mans are two leading brands that are linked through their achievements in the world of endurance,” said Pierre Fillon, President of the ACO. “Dunlop has won the 24 Hours of Le Mans overall 34 times in the history of the world’s greatest race and their experience of building tyres for endurance racing will be of immense benefit to the teams competing in the ELMS.”

Jean-Felix Bazelin, Director of Dunlop Motorsport Operations, added: “As the most successful tyre manufacturer in terms of overall wins in the Le Mans 24h race, it is an honour to extend our partnership with the ACO to become a partner to the European Le Mans Series. We look forward to working proactively with the ACO to further raise the profile of this important and prestigious championship.”

Gérard Neveu, CEO of the European Le Mans Series, said: “We welcome Dunlop as a full partner in the European Le Mans Series for the 2015, 2016 and 2017 seasons and we look forward to developing our strong relationship even further as we move forward to the start of the 2015 season at the official test at Le Castellet in March.  All competitors in the LMGTE and GTC categories will use Dunlop tyres, which will give them the confidence and consistency of using a new range of tyres from a world class manufacturer developed for endurance racing.”