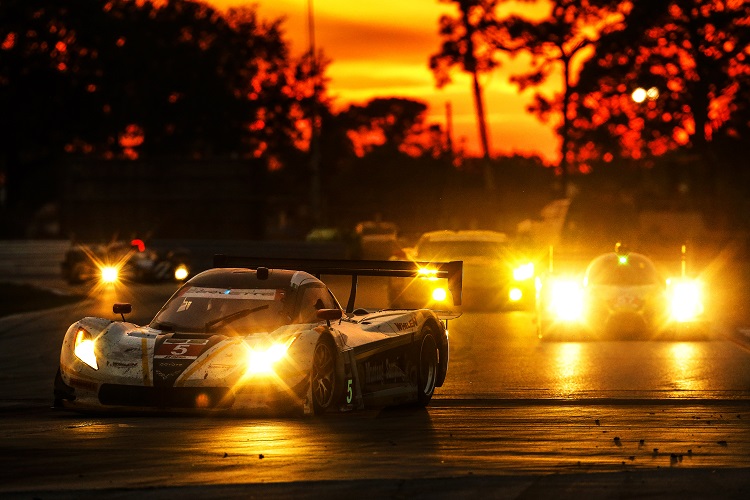 The 2015 12 Hours of Sebring continued around the legendary Florida circuit with the #5 Action Express Racing Corvette DP leading overall as the conditions began to cool as the day turned to dusk.

In an uninterrupted spell of green flag racing, the racing was fierce within all four classes, and heading into the final quarter of the race, class victories are still there to be won.

The end of hour six had seen a full-course caution to recover the #16 BAR1 Motorsports Oreca FLM09 of Marc Drumwright that had spun into the tyre barrier at the chicane, and when the green flag flew just after the start of the seventh hour it was the #01 Chip Ganassi Racing Ford Ecoboost Riley DP of Scott Dixon who got the jump ahead of the #5 Action Express Racing Corvette DP of Joao Barbosa and the #90 VisitFlorida.com Corvette DP of Richard Westbrook.

Westbrook briefly took second place from Barbosa, before the Portuguese driver reclaimed the place and made gains on the over eight-second lead of Dixon, eventually catching and then passing the New Zealander as the #01 got caught up behind the #63 Scuderia Corse Ferrari 458 Italia heading into the final corner.

The pit stop cycle saw Barbosa hand over to Sebastien Bourdais, and the Frenchman was a man on a mission as he pulled comfortably away from the Ganassi entry, now in the hands of Scott Pruett after the American took over from Dixon who completed more than a three-hour stint behind the wheel. So much was the advantage of the Action Express Racing machine that he moved a lap ahead of Pruett as the sun began to set over the horizon.

Mike Rockenfeller took over the #90 VisitFlorida.com entry from Westbrook, and was only a handful of seconds behind Pruett in third place in the Prototype class ahead of the #10 Wayne Taylor Racing Corvette DP of Max Angelelli.

The pole sitting #57 Krohn Racing Ligier JS P2 entry had a quick spin on circuit, with team boss Tracy Krohn being the culprit as the team fell more than seven laps behind the race lead.

In the Prototype Challenge class, the #52 PR1/Mathiasen Motorsports entry of Andrew Palmer held a comfortable lead heading into the final quarter of the race, over ninety-seconds clear of the #54 CORE Autosport entry of James Gue.

The CORE Autosport entry had managed to get ahead of the #38 Performance Tech Racing entry of James French, who had taken over the car from the impressive Conor Daly. 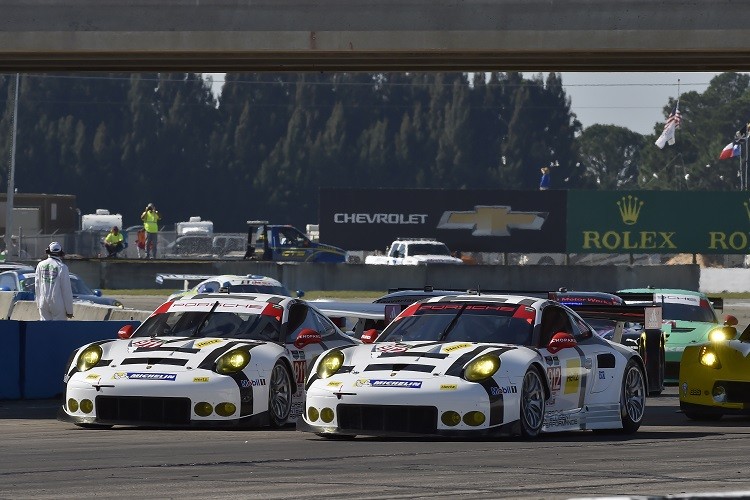 The #911 and #912 Porsche North America Porsche 911 RSR’s of Richard Lietz and Earl Bamber held the advantage in the GT Le Mans class, with around twenty seconds between the two Porsche’s, while the #3 Corvette Racing entry of Jan Magnussen running a strong third.

The #4 Corvette Racing entry had a brief moment when it crawled to a stop, only for its driver to reset the settings inside the car and pulling away apparently back at full power.

In the GT Daytona class, the #33 Riley Motorsports entry of Ben Keating took the lead away from the #23 Team Seattle/Alex Job Racing Porsche 911 GT America of Ian James, and held the lead at the end of the ninth hour, with the #007 TRG-AMR Aston Martin of Brandon Davis moving into second and the #58 Wright Motorsports machine of Jan Heylen in third, with the #23 falling outside the podium places.