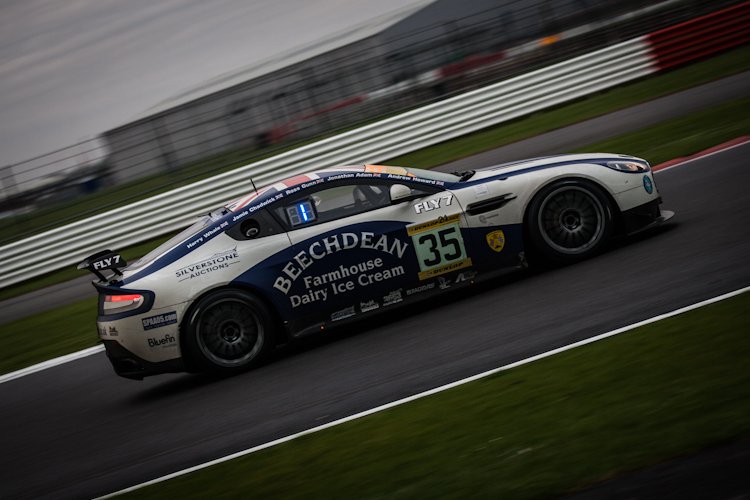 The run into daylight was a period of consolidation and recovery for the surviving 2015 Dunlop 24 at Silverstone runners. Teams like Beechdean Motorsport and Simpson Motorsport strengthened an already strong position while the likes of Team LNT and MARC Cars Australia desperately salvaging ruined race chances.

The Beechdean Aston Martin Vantage GT4 had the best three hours of them all, working their way from fifth overall to the outright lead of the race. All this in a class 3 entered GT4 car, up against GT2 and Prototype machines. Andrew Howard, the team owner, along with British GT talent Jonny Adam, Jamie Chadwick, Ross Gunn and Harry Whale took maximum advantage from the pit stagger to lead by 22 seconds at the top of the hour but battled hard to stay in shouting distance for much of the 30 minutes preceeding.

The battle with the Phillip Hopkins, Franck Pelle, Peter Cook, Adam Sharpe and Stephen Richie driven Audi R8 LMS was mainly fought at a distance. When the two cars came into visual range there was little the slower Aston Martin could do. Howard himself held out for half a lap against a GT3 car on a power circuit when the Audi came to unlap itself. There was little to be done to stave off the inevitable.

No help was on offer from other class 3 cars either, with the Speedworks Aston Martin a distant third in the overall classification at the top of the hour. Not to mention the impending threat of class battle with a rapidly approaching Lotus Evora from Marcos Racing International.

Come the top of the hour it was class 3 vehicles in 1st, 3rd and 4th with a class 4 car filling fifth. That left the Simpson Audi as the only class 1 entrant in the top 5. Team LNT were recovering from long winded repairs after contact with the Speedworks Vantage down at the Vale and Club but had only made it back to sixth by 0700. Third in the top class went to the Radical Motorsport Radical RXC V8, a strong performance for the car but well of any expected pace in twelfth overall.

Class 2 was equally awol, with the leader in class in an dismal 15th place. That was the #15 Topcats Racing Marcos Mantis. The team could at least take some solace from a provisional 1-2 in class, with the Marc Cars Australia Ford Focus V8 in 16th overall and third for the class behind the green colored #17.

The fourth class continued a strong run to the flag with fifth as a class top finish in the segment. That was the ever present and ever quick Bas Koeten Racing SEAT who took that top spot, well clear of the #61 JR Motorsport BMW M3, ten laps distant. The Saxon Motorsport BMW 135d would have secured a fantastic finish in eighth place but for the third excessively quick class 4 Aston Martin. WEC Motorsport claimed provisional third in class well outside of the top ten.

The Ford Fiesta of Mensley Motorsport made a serious attempt to get to the thick end of class 5 but lost too much time in the early running. Instead the uber-efficient Red Camel – Jordans.nl romped away at the front of the class, almost ignoring much faster cars as unworthy. The Ivo Breukers, Rik Breuckers and Sjaco Giffioen drive line up and diesel frugality of the car made for an un-beatable effort in 11th overall.