FF Corse’s Adam Carroll has won an incident filled opener at Oulton Park as the 2015 Avon Tyres British GT Championship made its presence known at the Cheshire circuit.

The start of the race saw Liam Griffin in the pole sitting Oman Racing Team Aston Martin Vantage V12 GT3 storm away from the chasing Gary Eastwood – who started the FF Corse Ferrari – and had a clear lead into Old Hall as the rest of the grid filed in behind.

The short safety car didn’t stifle Griffin and when the restart came, he already had a sizeable lead over Eastwood coming over the line. Behind though, Andrew Watson in the second VonRyan Racing McLaren was quick to get past Andrew Howard in the Beechdean AMR Vantage.

It seemed to settle for a few minutes after that, with Griffin continuing to sit pretty in the #6 with Eastwood not able to  reduce the gap and eventually being overtaken by Watson in the 650S. Unfortunately for him, his second place didn’t last long as a trip into the barriers at Island Bend put pay to his charge before it had properly started.

While all this was going on, Oz Yusuf in the #77 ISSY Racing Lotus Evora was charging back to claim the first place he started with in the GT4 class, the only car standing in his way was the Century Motorsport Ginetta G55 but Yusuf made the eventual pass seem too easy and decided to stretch the legs of his Lotus.

Back in the GT3 class, Yoluc decided to carry on his mischief making by spinning at the chicane while being passed by the GT3 leaders. That caused cars to scatter everywhere across the track with Gary Eastwood saying of the incident that brought out the safety car: “Yoluc’s a young guy with two years’ experience and lots of money by all accounts. That’s a dangerous combination because money doesn’t bother him but it does a lot of other people here with damage to the cars and he’s playing a video game. He’s blinkered, he’s red misted and it’s dangerous. He’s going to have a speaking to today because every guy in the pit lane wants him stopped.”

The pit lane opened just as the safety car came out and Eastwood managed to pull a blinder by handing over to Adam Carroll sharpish and getting the car back out ahead of Rory Butcher who had taken over the #6 Oman Racing Team entry.

The chaos in the pit lane also saw Joe Osborne in the Triple Eight Racing BMW Z4 GT3 climb up to third place and ready to pounce on the leading duo.

As the safety car came back in, with about 20 minutes to go in the hour long race, Carroll was in no mood to be battled by Butcher and decided to pull off into the distance and give himself a second cushion over there Aston.

During this period, Mike Simpson in the #32 Team LNT Ginetta G55 GT3 was setting the timing screens ablaze with fastest laps as he looked to close down Mat Jackson in the #4 Oman Racing Team car. He was getting closer to taking fourth place off the Aston until the British GT gods handed down a punishment to him and the sister entry of Tom Oliphant for overtaking during the last safety car period and nullified the battle. 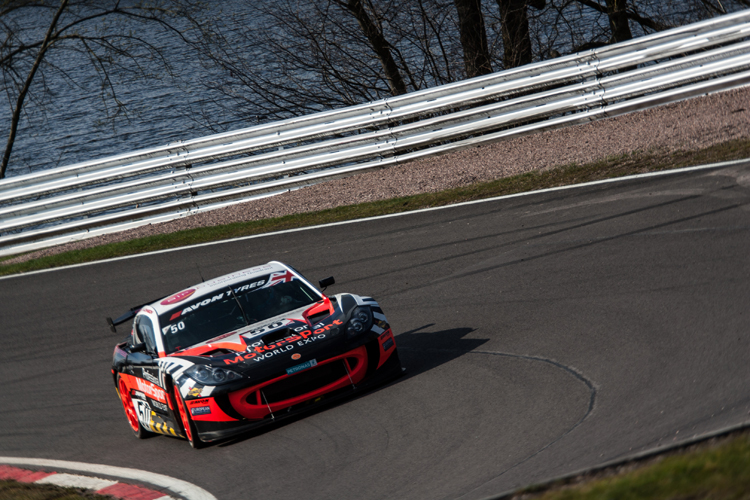 In GT4 as this was going on, Ross Gunn in the GT4 Beechdean car was picking up on Jamie Chadwick’s good work and battling for second place in class. He was third for much of the last ten minutes until he got his elbows out and gave Mike Hart in the Quantamatic Racing car a shove onto the grass at Old Hall and moved into second.

As though it was mirroring the GT4 class, GT3 was also having a fascinating battle for the runner up spot with Osborne in the BMW battling fiercely with Rory Butcher. For a while the BMW was sitting pretty in second and cutting into Carroll’s lead in the Ferrari, sadly though he lost out to the Aston coming into the dying minutes of the race and had to settle for fourth.

Finishing fourth was Jackson, who in his debut race in British GT, had an easy final lap after Mike Simpson was penalised as Benny Simonsen in the Rosso Verde Ferrari couldn’t get close enough to challenge from fifth.

Into GT4 and the winners after a measured drive that saw them relatively undisturbed was the #50 Professional Motorsport World Expo Racing with Optimum Ginetta GT4 of Graham Johnson and Mike Robinson. They finished 4.7 seconds ahead of the Beechdean car which itself finished ahead of Mike Hart and Terry Langley.

Fourth place would go to the sole Porsche in the field this year, the AmD Tuning 911 GT4 of Graham Coomes and Shaun Hollamby. Early leaders Century Motorsport, with Aleksander Schjerpen and James Birch behind the wheel, had to settle for fifth.

After the race, GT4 class winner Graham Johnson, said: “It was a good result. We’ve been quick throughout the whole of winter. Mike and I have been racing with each other or against each other for the last 13 seasons and we know each other’s strengths and weaknesses and we work well together.”

The last word goes to Jamie Chadwick, this is just her’s and Ross’s first race in British GT and to finish second is a better than expected result: “I came in the pits when the safety car came out so we tied that perfectly and the team did a mega job and then Ross jumped in and did a cracking job. He did a fantastic move for second into the first corner on the last lap so I couldn’t be happier.”

The second race takes place at 4.00pm today with a lot of work needing to be done up and down the pit lane to get the cars looking their best again.

By James Thompson
14 Mins read
Entering the second half of the season, the championship saw a new points leader, more contenders make their presence felt and even more excitement and drama in the second part of the 2020 British GT Season review.
British GT

By James Thompson
14 Mins read
In part 1 of the 2020 Intelligent Money British GT season review, we look back on rounds Oulton to Brands Hatch and all of the exciting and controversial events that took place.