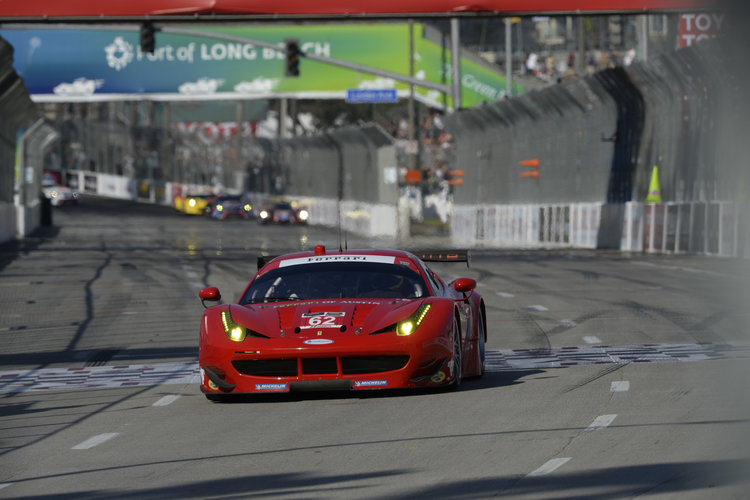 Giancarlo Fisichella described his Risi Competizione team’s result at round three of the Tudor United Sportscar Championship as “disappointing, but great” after finishing second in the GTLM class.

The team repeated its result from the 12 Hours of Sebring, after a typically intense GTLM skirmish with the two Team RLL BMW Z4s.

Fisichella qualified the car third in class, behind the two BMWs. In the race, however, the Italian made up for his arrears at the first corner by passing both Bill Auberlen (#25) and John Edwards (#24) at the first corner. Using all of his experience, the 42 year old held off the charging BMWs, along with the pair of works Corvettes and the three Porsche 911 RSRs that were entered.

“It was a great start to the race and great reaction time and we maybe even had the better straight line speed,” said Fisichella. “I was quite comfortable for the first part of the race and then the tyre pressure went up a bit and the car was sliding slightly more on four wheels. The BMWs were better in the mid-field but I was able to keep them behind me.”

Fisichella maintained his lead for 45 minutes until the pit window. After a near-perfect stop that gained the Risi team further time, Kaffer jumped in to defend the lead that his Italian team-mate had accrued.

However, Kaffer’s rhythm was disrupted after the Action Express Racing Corvette DP of Joao Barbosa scraped the wall in front of him. The Risi driver was forced to take evasive action, and although no damage was sustained it did allow the BMWs to close in. The #25 car of Dirk Werner quickly passed Kaffer, and held on to secure the GTLM class victory by about three seconds.

“Unfortunately, with about ten minutes to the end, the BMW was catching Pierre and overtook him at the end,” said Fisichella. “Yeah, it’s disappointing but it’s another great result. The crew did a fantastic job and I’m looking forward to the next race in a few weeks.”

“I’m really proud of the whole Risi Competizione team,” added Kaffer. “They’ve been very strong and I’m really satisfied with the second place finish. I’m already looking forward to Laguna Seca in two weeks. I think we will have a strong car and our Ferrari will be in good shape there.”

Risi Competizione was also awarded the DEKRA Green Challenge Award for the most efficient pit stop of the race, an accolade that the team also picked up at Sebring.

The Tudor United Sportscar Championship will return for a 2 hour 40 minute race at California’s Laguna Seca circuit on May 3.