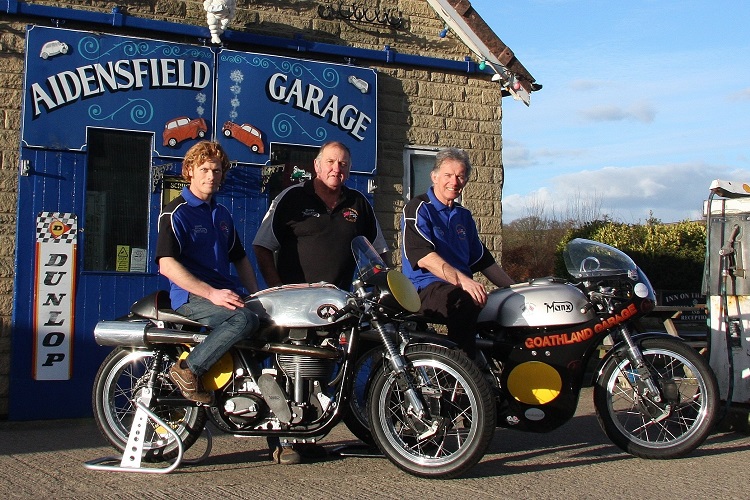 The Goathland Garage Classic team have announced that Gavin Lupton and Nick Jefferies will be representing them at this year’s Classic TT.

Both riders will compete in the Motorsport Merchandise 350 and Bennetts 500 Classic TT races on-board the team’s Manx Norton machines.

The garage, which is more commonly known as Aidensfield Garage from the long running TV series Heartbeat, is ran by Bob Wood, who has years of experience behind him when it comes to building the Manx Norton bikes.

Lupton is a former Manx GP winner having won the Newcomers B race in 2011, and he also finished as the runner-up to Dean Harrison back in the 2013 Motorsport merchandise Formula Classic TT race.

He said: “I was thrilled to bits when Bob approached me last September asking me to ride for him and felt we hit it off straight away. He is your typical straight talking, no nonsense Yorkshireman who says it as it is… I like that in a person.”

“I couldn’t ask for a better team mate either, I’ve known Nick for some time and we get on really well. He has even been a bit of a mentor to me during the last couple of years helping me learn the TT course, so I’m well chuffed.”

Jefferies is a road racing veteran, having competed in various Isle of Man TT and Manx GP events over the past 30 years. He has 87 race starts to his name on the TT course, as well as 67 replicas.

He was the winner of the 1993 Formula One TT race and has also finished on the podium in several other road racing events on the island.

Ahead of this year’s event, Jefferies said: “I have to say, I’m very privileged to be riding Bob’s well turned out machines and having past experience on Manx Nortons, I’m looking forward to taking these round the TT course. It will also rekindle my love for single cylinder racing around there, something I enjoyed when the singles class was part of the TT in the 90’s.”