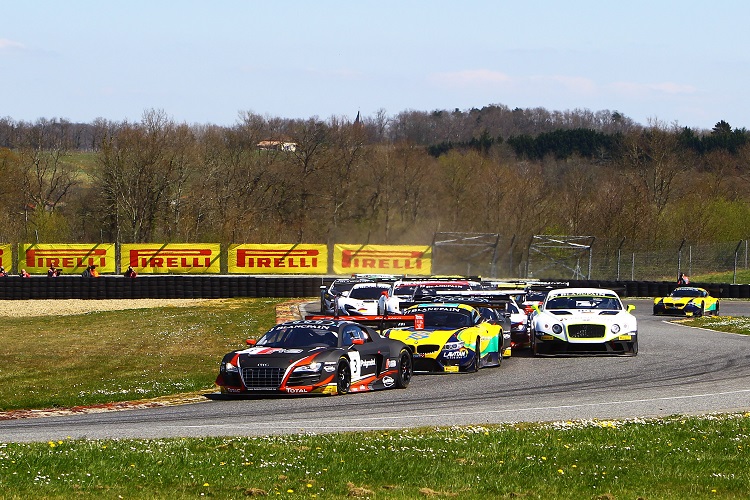 Monegasque men Stephane Ortelli and Stephane Richelmi converted pole position into victory in the qualifying race at the opening round of the Blancpain Sprint Series season at Nogaro.

After setting the pace in qualifying, Ortelli led the pack away at the start in the #3 WRT Audi ahead of the BMW Team Brazil car of Dirk Muller.

There was chaos behind however as Maximilian Buhk‘s Bentley and Markus Winkelhock‘s Audi made contact at turn two. As both cars spun across the track, Buhk was hit by the sister car of Jules Szymkowiak and Winkelhock collected by Craig Dolby‘s Nissan. Buhk managed to continue, but the other three cars involved were all forced into retirement.

Ortelli was able to pull away from Muller over the course of the first stint, leading by more than six seconds when pit window opened and Muller made an early stop to hand over to his fellow factory BMW driver Maxime Martin – the pair are racing for the Brazil squad in Nogaro as the team’s regular drivers are competing in Stock Cars back home.

Martin was quickly up to pace, helping him to reduce the gap to the Audi by the time Richelmi took over at the halfway mark.

The ex-GP2 racer still had an advantage of over a second with 20 minutes to go when the safety car was deployed to recover the Reiter Lamborghini from the gravel trap. Albert von Thurn und Taxis reported contact from Rob Bell‘s Attempto McLaren, marking the end of a fight for fourth between the two cars that had begun on lap one.

The race restarted with 13 minutes to go, and despite constant pressure from Martin – a team-mate in Belgian Formula Renault 1.6 in 2006 – Richelmi was able to hold on up front by half a second to claim his first win in GT racing.

Frank Stippler and James Nash ran third from lap one in the #4 WRT Audi but the Briton was slow after the safety car and eventually pitted with a puncture.

Bell had by then taken P3 from the Audi but he too slowed towards the end, perhaps as a consequence of significant front-end bodywork damage sustained in the first-lap carnage.

That allowed the #2 WRT Audi Chrstopher Mies and Enzo Ide to inherit the final podium place. The sole Ferrari in the field of Rinaldi Racing took fourth in the hands of Marco Seefried and Norbert Siedler, just holding off Bernd Schneider, who went on a charge in the second half of the race after taking the controls of his GT Russian Mercedes of Alexei Karachev.

Next up were the two ISR Audis of Marco Bonanomi/Filip Salaquarda and Anders Fjordbach/Thomas Fjordbach. Buhk and Vincent Abril recovered to P8 in front of Brazil BMW twins Ricardo Sperafico/Rodrigo Sperafico and the Porsche of Martin Ragginger and Marcel Wagner.