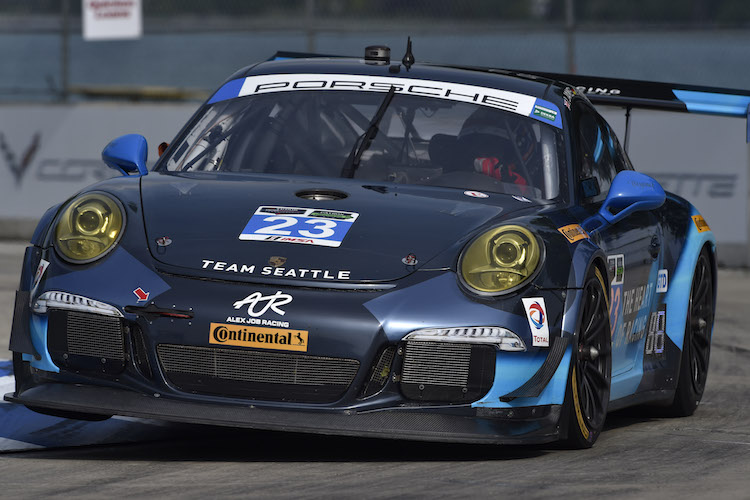 In yesterday’s Chevrolet Sports Car Classic at Belle Isle, Detroit, MI, it was Alex Job Racing that picked up the GT Daytona honours, after strong drives from Ian James and Mario Farnbacher in the #23 Team Seattle Porsche 911 GT America.

The pair, who had previously won the 2015 12 Hours of Sebring, now have two wins under their belt, putting them into an strong position to fight for the GTD title in the Tudor United SportsCar Championship.

Ian James pitted under green just before the race’s first caution was called. This wasn’t a problem, though, as the team’s pit crew managed to get the car back out onto the track and still stay in the lead. The remainder of the field pitted under yellow, even further extending their advantage. With Farnbacher now behind the wheel of the Porsche, he would never lose the lead, and crossed the finish line after 1h40 of racing in front of the GTD pack.

Alex Job Racing’s other car, the #22 WeatherTech Porsche 911 GT America of Cooper MacNeil and Leh Keen, finished fourth, posting yet another strong performance for the team.

Other Porsche GTD teams put in strong performances, too. The #73 Park Place Motorsports car qualified as the quickest 911 in fourth, and drivers Patrick Lindsey and Spencer Pumpelly finished the race in fifth.

Starting from 8th, Magnus Racing made up a lot of time during the pit stop in their #44 Porsche. However, they sustained damage just after the race’s halfway point, and so John Potter and Andy Lally could only manage a 7th place finish.

Finally, the #58 of Wright Motorsports was the last Porsche to finish the race, in 8th place. The rain at the end of the race made the pit straight and turn 1 very slippery. Jan Heylen, who took over from Madison Snow in the pit stops, made contact with the wall at T1 with two minutes to go. He went to the medical centre but was released soon after.

“It was very slippery and it was a challenge to keep the car between the walls,” commented Mario Farnbacher. “The second to the last lap it was raining in the first and last sectors of the track. I was able to take it a little easy as we had a 10-second gap to second place. After the checkered flag I brushed the wall from aquaplaning. Detroit has been good to us. We had our first success here with a second place run last year. This is awesome for the team and for the championship.”

Alex Job Racing announced just before yesterday’s race that they will return to the USCC next year. Both the #22 and #23 teams will use the brand new Porsche 911 GT3 R next year.

“This is an excellent result for our most enduring customer, Alex Job Racing,” said Jens Walter, CEO of Porsche Motorsport North America. “At Porsche we are very pleased to see that, in the same day, we can announce that both WeatherTech and Team Seattle will return to Alex Job Racing in 2016 and to do so in the new Porsche 911 GT3 R. To then win and place a second car in the top-four, speaks well of the future.”

The USCC now goes for its break around the 24 Hours of Le Mans, and will return on June 28 for the Sahlen’s Six Hours of The Glen, at Watkins Glen, NY.

Jake covers sportscars for The Checkered Flag, mainly Tudor United SportsCar Championship and World Endurance Championship, along with a variety of other series including World Rally Championship.

Mercedes: We have to eliminate mistakes

Paffett to stay in Formula E as Mercedes reserve