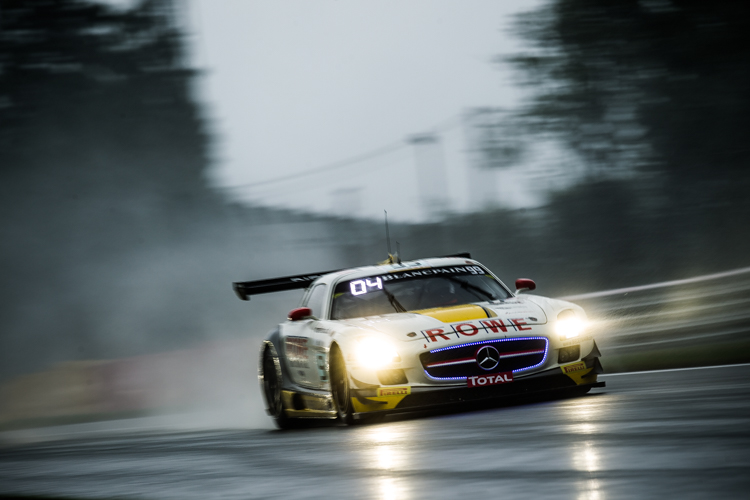 The grip exerted over the 2015 Total 24 Hours Spa by the defending champions in the #1 Audi Sport Team WRT R8 LMS first slipped before being lost altogether amid the first laps in total darkness in the sixth hour of the race.

The team of Rene Rast, Markus Winkelhock and Laurens Vanthoor had enjoyed a lead of over a minute for much of the race, owing to a little luck and some wise strategy choices, but the fifth safety car of the race – brought out when Ryan Ratcliffe spun the Triple Eight BMW into the Blanchimont barriers much of their lead was taken away by the decision of race control to only use one safety car.

That allowed Daniel Juncadella to close up to within 20 seconds of Vanthoor, though the Audi man began to build his lead again once the green flags were back out. The battle over third place remained at the tail end of the lead lap, Edward Sandstrom fighting for – and eventually finding – a way past Dirk Werner to put the Sainteloc Audi ahead of the BMW Sports Trophy Team Marc VDS Z4 GT3.

Behind Andrea Piccini and Nico Verdonck were fighting over position just outside of the top ten. Piccini, who had moved up to second in the Pro-Am cup when the #47 AF Corse Ferrari pitted from the class lead just as the safety car retreated to the pitlane.

Looking to move up another place he searched for a way to the inside of Verdonck’s Pro Cup Black Falcon Mercedes at La Source. Verdonck – failing to see the Ferrari making its way to the apex turned in damaging both cars. Verdonck retired the car on the spot while Piccini set off around the 7km Spa lap with his 458 Italia trailing sparks.

Minutes later the safety car was called back into action, for the sixth time.

At the same time Vanthoor started to drop down the order, having gone off at Courbe Paul Frere, damaging the #1 machine. The off, which initially cost the team four minutes, let Juncadella through into the lead in the #99 ROWE Racing Mercedes SLS AMG GT3. Vanthoor’s charge was pushed back into the garage the team starting to make repairs to the car, but with hopes of an overall victory lost.

Despite the accident for Piccini Ferrari teams still hold first and second in Pro-Am, AF Corse’s #51 and #47 teams holding the positions ahead of the #12 BMW from TDS Racing. The #18 Black Falcon Mercedes, one of the quickest Pro-Am cars in the run up to the race itself, had been dropped down the order after Sean Johnson found the Fagnes gravel in the car.

Team Parker Racing continue to lead in the AM Cup ahead of the #50, another of the fleet of AF Corse Ferraris in the race. The order in the class had been shaken up by a 30 penalty for the #28 Delahaye Racing Team – third in class after three hours – for an infraction while the race was controlled by the safety car after Felipe Salaquarda crashed the ISR Audi at the same point Ratcliffe would later find in the #888 entry.