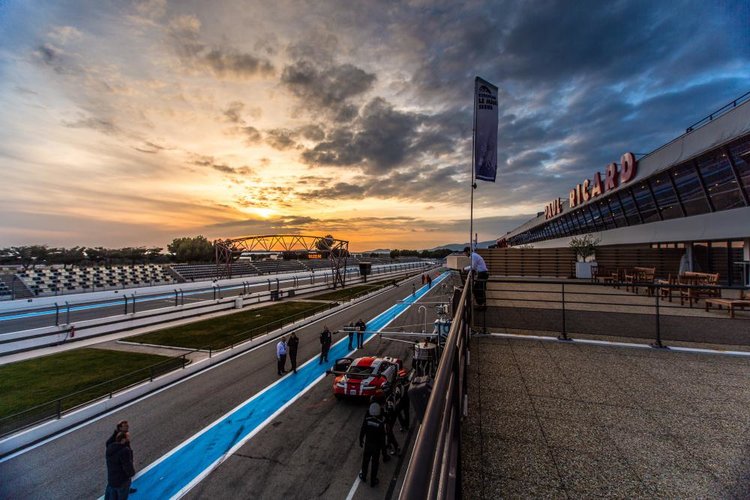 Despite its underground presence in the general motorsport sphere, the European Le Mans Series has consistently been one of the most competitive and exciting championships on the planet in 2015.

With ten  points separating the three title contenders and at least seven teams still within arm’s reach of the LMGTE title, this weekend’s penultimate round at the 3.64 mile Circuit Paul Ricard in the South of France should be one of the most anticipated races of the year.

29 entries have been received for round four of the ELMS, featuring an 11-strong cohort of LMP2 machinery. Gibson customer Jota Sport heads into the race leading the championship standings after a commanding victory at the Red Bull Ring in July, although the Thiriet by TDS Racing Oreca 05, which lies just two points adrift of the British outfit, is arguably the more fancied entry with its superior straight line speed on the 1.1 mile Mistral Straight likely to be the defining factor.

Thiriet by TDS Racing shook down its new-ish Oreca, as well as its GTC class BMW Z4, at the circuit in late August, and is fully prepared to stake a claim for another LMP2 title on home soil.

The older Oreca machines will also be in contention this weekend, especially the Murphy Prototypes 03R Nissan of Nathanael Berthon, Michael Lyons and Mark Patterson that sits fifth in the overall table. GP2 star Berthon is missing his open wheel race at Monza this weekend to be with his ELMS team-mates, and he should prove to be a valuable asset yet again after setting the pace at the pre-season Paul Ricard test for the second year in a row.

SMP Racing, or rather, AF Racing, will likely challenge for a podium and will be the closest thing to an Oreca in the speed traps. The specialised BR01 Nissan registered speeds of 306 km/h on the Mulsanne Straight at Le Mans – consistently placing it in the top three in LMP2 – so it should be at the sharp end of the field at Paul Ricard if the car’s ever-improving reliability is up to scratch.

Charlie Robertson and Sir Chris Hoy could get one step closer to claiming the inaugural ELMS LMP3 title this weekend if they can produce a high result in their #1 Team LNT Ginetta Nissan. The Scottish duo lead the standings by 12 points from the University of Bolton entry (which is not taking part this weekend), with the #2 Team LNT Ginetta a further seven points adrift. GT Academy winner Gaetan Paletou will be rejoined by Michael Simpson in the #2 car after Simpson missed the Red Bull Ring round due to a British GT clash.

Elsewhere in the LMP3 ranks, a strong podium result for Villorba Corse at the Red Bull Ring suggests that the plucky Italian squad could forge an upset at Paul Ricard, while the now triple-manned SVK by Speed Factory effort will be hoping to bounce back from its Austrian retirement with a second podium finish of the year.

While the LMP3 championship is nearing decision, seven teams are still realistically in contention for the LMGTE class title, with Formula Racing leading the way on 48 points with its Ferrari 458 Italia. Five points behind is the #55 AF Corse Ferrari 458 Italia, while Proton Competition heads the non-Ferrari runners in third with 38 points.

Ferrari has dictated the pace in LMGTE throughout 2015, and at Paul Ricard last year nine of the top ten qualifying times were set by the prancing horse, suggesting that the Italian marque should be on top again this weekend. However, the ELMS balance of performance has not always been so straightforward in the races, as exemplified by Gulf Racing UK’s win at Silverstone with a Porsche 911 RSR, meaning that predicting an LMGTE winner for the 4 Hours of Le Castellet remains a tough ask.

“All cars have been very close, but of course – if you look at the results, I can see that Ferraris have largely been on top,” Formula Racing’s Mikkel Mac told The Checkered Flag. “But you also have to look at how the different teams compete when it comes to strategy during the races. That’s what played such a big role in our victory at the Red Bull Ring.”

2nd in Austria was enough to keep TDS Racing atop the GTC standings (Credit: ELMS media)

In GTC, TDS Racing is holding its position at the top of the class pile with its BMW Z4 GT3 despite a double victory for the #62 AF Corse Ferrari at Imola and the Red Bull Ring. Just five points separate the two entries heading to TDS Racing’s home event, so expect to witness a spirited battle between the two class protagonists as they try to establish the upper hand heading into the Estoril finale.

Massive Motorsport earned its first ELMS podium finish in Austria with the sole Aston Martin Vantage in the field, and providing it stays void of any mechanical issues or incidents that caused DNFs in its opening two rounds we could be seeing another diverse top-three result in GTC.

The 4 Hours of Le Castellet is split into two days of running, with the ELMS being the only championship on display. The times listed are all local (CEST).

The Checkered Flag will be providing live text coverage from Circuit Paul Ricard throughout the weekend, including a live blog during the race and live Twitter updates over the course of the two days.

Follow our social media accounts for unprecedented access to the penultimate round of the European Le Mans Series here.