The 2015 Ginetta Junior Championship is going to be remembered for consistently record-high grids that once again produced the series’ brand of all-action, entertaining racing, headed by a thrilling championship duel that went right down to the wire …. and beyond.

The way in which the destination of the title was eventually decided, with confusion on the final day and a trip to the MSA National Court of Appeal, sadly tainted what was a fascinating championship battle between eventual victor Jamie Caroline and his chief rival Senna Proctor.

The raw pace and battling spirit of Caroline came up against the ultra-consistent and determined Proctor to produce a title fight that ebbed and flowed throughout the season, with it being JHR Developments ace Proctor that held the early advantage.

Despite leading only three racing laps in the first twelve races of the season, Proctor made them count with wins on each of the opening two weekends, plus four other podium finishes, to hold a 21 point championship lead after the opening eight races.

Caroline meanwhile suffered a relatively slow start to the campaign with troubles on the first two weekends, but the HHC Motorsport man hit his stride in the middle of the season with a sensational run of five consecutive victories including doubles at Oulton Park and Croft to move to the top.

The HHC Motorsport man couldn’t seem to keep himself out of trouble though, meaning that despite wins at each of the final five meetings of the season, Proctor was still able to sneak back to the top of the standings at one stage and take the fight to the Brands Hatch GP season finale. 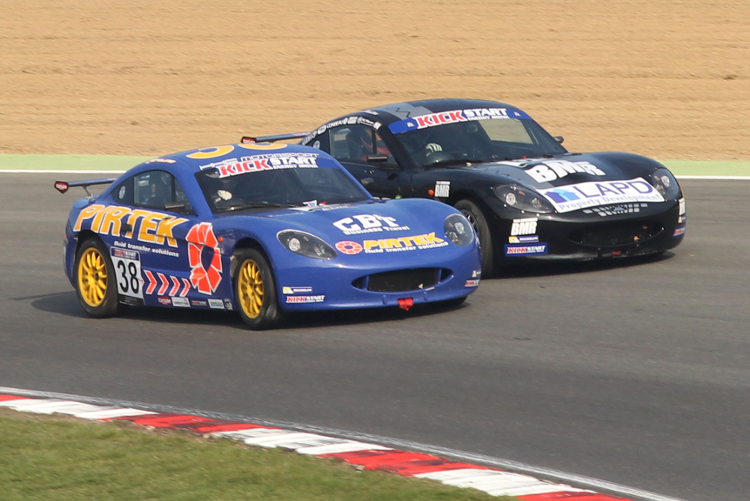 Caroline And Proctor Both Carried BTCC Backing As They Fought For The Title – Credit: Jakob Ebrey Photography

A topsy turvy final weekend saw each title contender take a win, but it was a nightmare race two slip to 17th for Caroline that seemed decisive with Proctor initially deemed the provisional champion – until a change of result post-race gave Caroline the single extra point required to take the title.

Remarkably, the duo ended the campaign tied on 473 points, with Caroline’s ten wins in the final fourteen races giving him the honours on countback compared to Proctor’s four successes, the latter’s title challenge being maintained by an unmatched thirteen podium finishes.

Caroline’s dominance at points is shown by his 88 laps led to Proctor’s 25, and he’ll feel he should have won the title by a larger margin, while Proctor will be left to rue tough visits to Thruxton and Croft, having failed to finish in the top eight on either weekend.

Behind the championship battle, an equally close fought battle emerged for third in the points between a trio of sophomore drivers, with JHR Developments duo Billy Monger and Dan Zelos taking on one of the surprise packages of the season Lewis Brown.

It was Monger who hit the ground running with victory in the opening race of the season and podium finishes on each of the next two weekends, but saw a potential title challenge fizzle out due to a number of finishes outside the top ten.

Monger hinted at what could have been with a superb Snetterton weekend, converting a maiden pole position into a second place and a race win, but despite seven podium finishes in total he was left down in fifth in the final championship standings.

It was a similar story alongside him in the JHR awning for Zelos, who had headed into the season as the highest placed returning driver from 2014 and kicked off the season strongly with seven top five finishes in the first eight races including a trio of podium finishes.

Unfortunately for Zelos though, continued mechanical problems and contact from rivals through the middle of the season derailed his campaign, meaning that despite four more podium finishes he was fourth in the points without a race win to his name.

The troubles for the JHR men meant that Brown was able to storm through to complete the championship top three. That came courtesy of some fantastic consistency for the R&J Motorsport man, with fifteen top six finishes in twenty races.

That included a run of fourteen consecutive top seven finishes to complete the year, a run unmatched by anyone else on the grid, and Brown mixed that consistency with some great drives en-route to five podium finishes – just missing out on a maiden win in a thriller at Knockhill.

If Brown exceeded expectations over the course of the season, then it was sadly the opposite for his R&J team-mate Jonathan Hadfield, who was unable to convert a stunning Donington Park weekend into a front-running campaign.

Hadfied turned pole position into a win and a second place in Leicestershire, but that would prove to be his only top nine qualifying result of a season in which he would only feature in the top five again at Knockhill.

The other full-time second year contender was Matt Chapman, who converted strong practice pace into regular top six finishes as the season progressed, capping off the year with a podium breakthrough in the final race.

One of the most exciting aspects of the Junior championship is seeing which of the Rookie contingent make their mark on the championship, and this season four names stood out from the field for their impact at the front of the grid.

Making the headlines in the first half of the season was German sensation Sophia Floersch, who burst into the limelight with a flawless performance at Thruxton in May, with a double win earning her plaudits and publicity from far and wide.

A maiden pole position and two more outright podium finishes followed at Croft as part of a run of six consecutive top four finishes, results that hinted at a potential outright title challenge before she brought her season to a premature end during the summer break.

Floersch’s HHC team-mate Patrik Matthiesen picked up the mantle as the head Rookie in the field, though the Dane was a quick starter himself as he stunned the paddock with pole position and two outright podiums on the opening weekend.

Three consecutive Rookie Cup wins at the start of the season also set him on course for a successful pursuit of the class title, whilst he continued to be a threat at the head of the pack and was rewarded with a maiden race win at Silverstone and a top six points finish.

Matthiesen’s main rival for the Rookie honours was Stuart Middleton, who enjoyed one of the best seasons ever for a Ginetta Junior Scholar as he battled at the head of the field with the returning Douglas Motorsport, before going on to win the Winter Series.

Qualifying in the top three on four occasions, including taking pole position at Thruxton, allowed Middleton to fight for eight outright top five finishes and four Rookie wins, with his standout weekend coming at Rockingham when he earned a pair of superb second place finishes.

Kyle Hornby joined Matthiesen and Middleton in the championship top ten meanwhile, the R&J racer particularly impressing with his fighting spirit and race-craft through the season as he gained 75 places from his grid positions over the course of the year.

Hornby converted that overtaking prowess into an outright podium breakthrough at Croft in June, before returning to the top three at Silverstone. He was unlucky not to be in the Rookie Cup title battle as well, having carded most class podiums than anyone else with eleven.

One of the key reasons the championship proved to be so entertaining and unpredictable through the season was due to the sheer competitiveness throughout the field, as shown by the remarkable fact ten different drivers took pole position in the ten qualifying sessions.

Caroline, Proctor, Monger, Hadfield, Floersch, Matthiesen, Middleton and Hornby all topped the timesheets at one stage, as well as Rookie drivers Dave Wooder and Devlin DeFrancesco at Oulton Park and Rockingham respectively.

For Wooder, the season ended with a sense of what could have been. Five top six qualifying results showed his raw pace, but various troubles restricted him to one top ten finish in the first seven meetings. He ended strongly though, with two fourth place finishes in the final four races.

DeFrancesco meanwhile was a late-starter alongside Charlie Fagg at HHC, with both impressing over the final six meetings. The former’s best result of seventh came at Knockhill, while Fagg broke into the top six in the final race of the campaign.

The competitiveness through the grid was also highlighted by 23 of the 25 regular drivers finishing in the top ten over the course of the season, with those missing out, Frank Bird and Esmee Hawkey, taking best finishes of eleventh and fourteenth respectively.

Will Tregurtha put in some impressive performances in the single-car RCE team, the standout result being a Rookie Cup win and fourth overall at Snetterton, with Alex Day and Geri Nicosia also taking season best results of fifth and sixth respectively in Norfolk.

The Racing Was Close Throughout As Drivers Strived To Move Up The Grid – Credit: Jakob Ebrey Photography

A bright start for Will Stacey saw his best weekend come at the season opener with a pair of top tens, while for Ben Green a consistent campaign saw him feature in the top ten on five occasions with his family SuperGreen Racing outfit.

Overall, a thrilling campaign saw the Ginetta Juniors continue to produce the most exciting and action-packed racing on the BTCC support package, whilst with five graduates having won major titles this season, it continues to be the starting point for the careers of the racing stars of the future.

The final championship standings can be found here.