Bill Sweedler: “This Class is The Most Competitive in Sportscars”

Bill Sweedler and Townsend Bell won the 2015 GT Daytona title in the Tudor United SportsCar Championship, with a win at Virginia International Raceway and fourth place at the season-ending Petit Le Mans, awarding the team with their second championship victory in three years.

“This class in North America is really the most competitive class in sportscar racing,” Bill Sweedler told The Checkered Flag. “To be able to be at the top of the podium for the championship is just a special thing.”

However, their season started with a disappointment by way of a mechanical issue at the Rolex 24 at Daytona. “We were running 2nd, and at the 19th hour mark we were running back and forth in the lead and when we had a mechanical problem that was clearly a complete downer.

“When you prepare for an endurance race that’s 24 hours, the one thing you don’t want to have is a mechanical, but that’s racing. Our strategy was racing, the team was perfect in the pits, none of the drivers had made any mistakes, but when a part goes – the clutch, it was incredibly disappointing.”

“The highlight was at VIR with a convincing win,” explained Townsend Bell. At the GT-only race, they came first, ahead of the TRG-AMR car of Christina Nielsen and Kuno Wittmer who were the championship leaders heading into Petit Le Mans.

Separating the VIR round from the season finale was Lone Star Le Mans at the Circuit of The Americas, where misfortune returned to the Scuderia Corsa squad.

“We just had some bad luck out on the track which we got penalised for when Townsend hit a prototype car. I actually thought at that point: “wow, had we just finished, we would have been 10 points in the lead”, and we had the same thing happen as last year.”

For Petit Le Mans, the team had to create a new strategy due to the incredible downpour that plagued the race.

“We only thought the race was only going to go five hours,” continued Sweedler. “After the five hour mark there was very little green flag running, so it was a matter of making sure we strategically stayed a certain number of spots ahead of the cars that were also in contention with us. That was our main focus.”

“[The weather was] horrible, with aquaplaning everywhere,” added Bell. “We just had to stay mistake-free, and we did.”

Also on the schedule for Bell and Sweedler, along with co-driver Jeff Segal, was the 24 Hours of Le Mans. Entering the LMGTE Am class in their Ferrari 458 GT3, they finished third.

“Townsend and I have won the 24 Hours of Daytona, and the 12 Hours of Sebring, but to me the crown jewel of endurance racing worldwide is Le Mans. After each time we won a race, we got more and more serious about trying to figure out how we could get over and compete in Le Mans.

“We had expectations to go to Le Mans as a new team, new driver pairings. With literally everything foreign to us coming into the race, to end up on the podium was pretty special.” 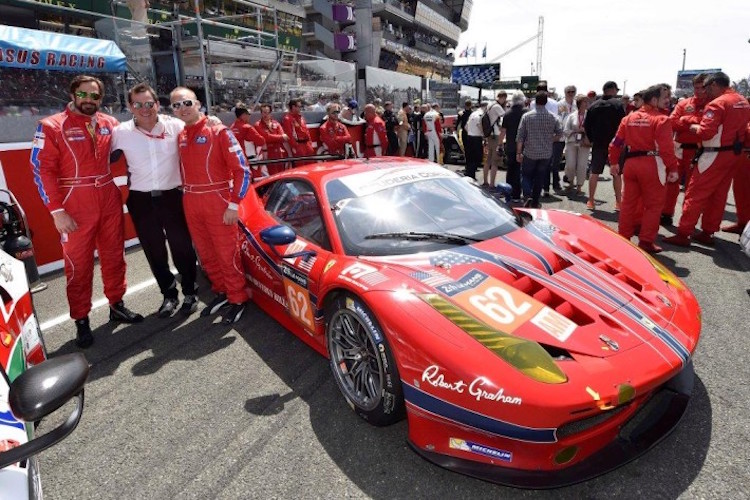 Sweedler, Bell, and Jeff Segal came third in LMGTE Am at Le Mans this year, they’re looking for a win in 2016 (Credit: Scuderia Corsa)

“It was terrific, made all the better by having my wife and kids with me to celebrate,” said Bell.

For 2016, the newly-renamed IMSA WeatherTech SportsCar Championship will have a redesigned GTD class, in which all competitors will have to follow FIA GT3 specifications. Scuderia Corsa will be using the new Ferrari 488 GT3 as a replacement to the dating 458.

“I think it’s going to add tremendous competition, and additional teams from around the world into the WeatherTech schedule,” said Sweedler. “I believe that the GT3 spec will be probably double or maybe even triple the car manufacturers that are competing there. Whenever you have more race cars and more teams from around the world, that leads to more exciting and competitive racing.”

For the near future, both drivers have their focus in the same place: winning.

“My full time IndyCar days are behind me,” said Bell. “I’ve been lucky in my career to sample most things, but I’m more keen to keep winning rather than keep sampling.”

“I love being in North America,” said Sweedler. “The tracks are incredible, they’re iconic. A lot of them are old-school, so you get a feel when you race at Mosport, of what it was like in the heyday of the 1960s and 70s. Obviously you’ve got the tracks that were the pioneering tracks – Sebring, Road America, Watkins Glen – in the 50s and 60s, too.

“[However,] there is an incredible allure to the World Endurance Championship. The tracks you race on in it are all modernised and up to the F1 standards, so there is an incredible desire to potentially look at that, someday in the future, but definitely not anytime in the near future for me because we’ve already announced we’re focused on the WeatherTech series and going back to Le Mans, bringing all the experience from last year to a winning effort.”