A cold and wet day in the Norfolk countryside is what greeted the drivers, however; it was proving to be a unique opportunity for two championship rivals as they tested out the Motorbase Performance BTCC car as part of their prize for finishing first and second.

The Renault UK Clio Cup championship battle had proved exciting for all those involved as Ashley Sutton eventually clawed his way back to claim the title by five points after a double win in the final round.

“It’s been a very good year for us,” said Sutton. “To have both titles, the graduate and the main title, it’s great. Obviously, that hasn’t been done since 2003, good to finally do it, 12 years later.”

Like the rest of the team, Sutton stood inside as he sized up his prize for the day. He wasn’t being given it immediately though as regular driver Mat Jackson took it for some test laps, in order to assess the tracks conditions.

“We’re just waiting for Mat to confirm that conditions are OK to go out there. I think I’m the first one out eventually, we’ll see how it goes.”

“At the end of the day, I’ve never driven the car, so I can’t say what’s going to be suitable, I don’t mind the wet … or the dry. I’ll drive with whatever the situation is,” he laughed.

With both him and Ash Hand in a team, fighting for the championship, tension can build. However; Sutton felt it was handled well, with neither being given an advantage. He still believed he had a healthy relationship with his team mate.

“At the end of the day, me and Ash were both battling for the championship, both in the same team, there was always going to get to a point in the season, where we battle with each other. But up to about round 6 we were playing level headed.

“After that we parted our own ways, the team were fantastically fair, they played us fairly, not giving anyone an advantage or a disadvantage, they were absolutely spot on.”

“Yeah, Team BMR, that’s the only advantage, I had their support off track. Not so much at the meetings, but definitely off track.”

Sutton said he had nothing planned for the winter, but intended to stay in karts, in order to keep himself in top form. Unfortunately, the new champion was unable to get in a great number of laps, but said that wasn’t an issue.

“It was just about getting the feel of everything, obviously the brakes and everything are completely different, let alone the horsepower, which is nearly double what we’re used to.

“It was really, really good, good experience. Shame it hasn’t dried up, but we’ll roll on now to the second one and use this as an experience.” Sutton went on to say that he was there to enjoy himself and times weren’t important.

“At the end of the day, we’re not looking at the times. They’ve shown me the data, but personally I’m not too fussed to go and set the fastest lap time. I’m here to enjoy it, after all, I’ve done my work for the year.

Joining Sutton in the car was the team mate he beat to the title, Ash Hand. Like Sutton he agreed that the weight of the Motorbase machine made a big difference.

“The car was very responsive, especially on the throttle, good on the brakes too,” started Hand. “The weight of the car proved to be a big deal, I think it was 1300 kilos compared to the standard we’ve been use to. It was definitely a lot lighter.”

“I’ve been running with cars that are 1100 kilos, so it’s quite a lot heavier, but it’s a good car, it feels good to drive. I’m just looking forward to this afternoon really.”

It was clearly raining harder after the first run, yet Hand was confident everything would go smoothly that afternoon. “It’ll be fine. I’ll have a bit of fun in the car.” 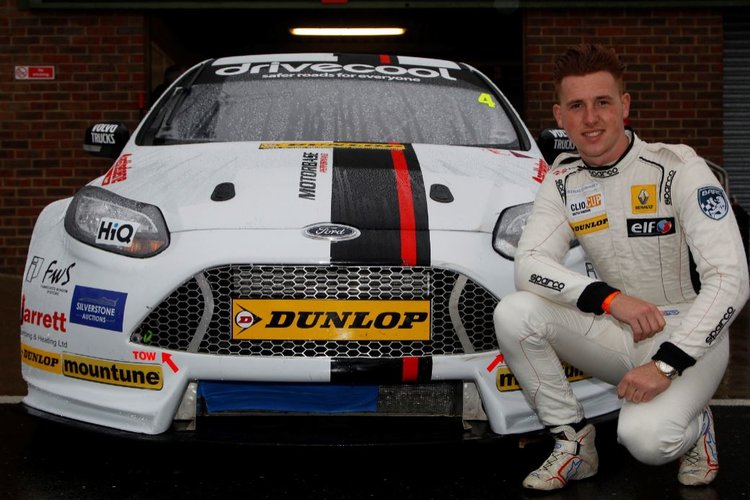 The last session never came as Max Hunter, the third invitee, crashed the BTCC car after his first run. The damage to the front bumper saw the car retired for the day. This meant that neither of the Clio Cup champions got a second run.

Hunter usually competes in the UK Mini Se7en Challenge, where this year the British driver was an outside shot for the title amongst a competitive field.

“Yeah, I did well, we came fourth overall in the championship. We got a few race wins and podiums, but we also had a few mechanical gremlins as well, so we’ll come back fighting next year. I’m enjoying it. It’s a really good club atmosphere, not as professional and serious as these guys, more relaxed.”

Hunter got involved as the winner of a Dunlop sponsored raffle where the top seven drivers from various championships were drawn. Max wasn’t too confident on getting another chance after the excursion; “Nah, not after that performance, I think I’ll just stick to Minis. I haven’t got a budget for a Touring Cars either.” But admitted he enjoyed himself.