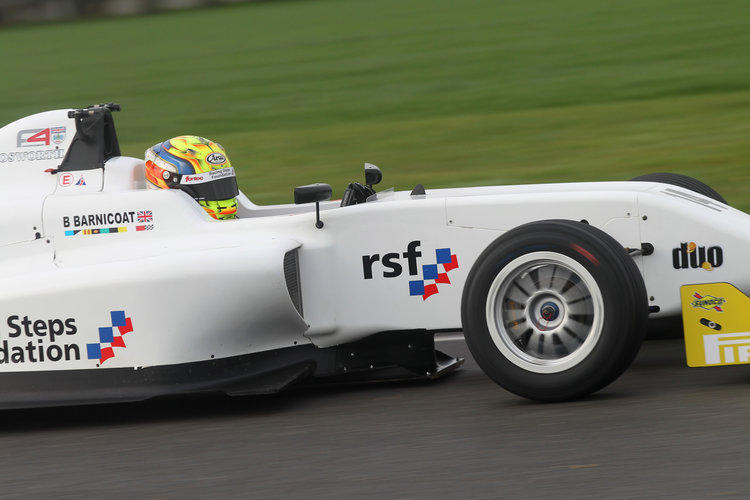 An intense final race at Brands Hatch saw Ben Barnicoat hold off the challenge of his rivals in order to claim the 2015 BRDC Formula 4 Autumn Trophy. Having started on pole, the Fortec Motorsports driver kept it clean off the start and never relinquished his lead.

Of the five drivers Barnicoat made the best start, barrelling into the first corner as the others tripped over themselves. By the end of the first lap he’d pulled out a 0.7 second advantage and tried not to make an unforced errors.

Lando Norris had started second and was initially delayed having not made the best of starts, but soon closed the gap to Barnicoat who’d pulled away in the opening laps. Norris ensured the pressure remained constant, almost forcing the leader into a mistake at Graham Hill bend a few laps later.

Despite this Barnicoat ensured his place on the podium and managed to complete the treble, having also collected the fastest lap at the mid point of the race.

His Trophy was highly dependant on Harrison Scott. Having gone into the race with equal points, Scott just need to finish ahead. However; was unable to make progress having started in fourth. He tried to keep on track for the opening lap, but found it trickier to make progress.

Another driver who’d gone into the race with equal points was Sisa Ngebulana, in his fight for third place overall he needed to finish ahead of Al Faisal Al Zubair and was not prepared to just let Scott through.

Despite Scott’s best efforts, he was forced to settle for fourth as the gap between him and the leading two grew ever bigger. As for Al Zubair, he crossed the line in fifth, almost fifteen seconds behind Scott.

Barnicoat’s title completes an excellent weekend for the Racing Steps Foundation driver who was also confirmed as a member of the Prema Powerteam for the 2016 European Formula 3 Season.