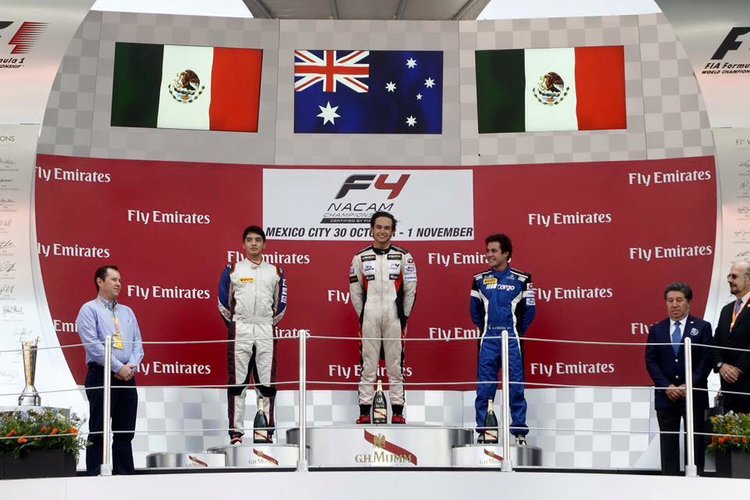 While the main focus was on the Formula 1, the Autodromo Hermanos Rodriguez also played host to the first exhibition round of the F4 NACAM Championship, the newly backed, FIA run series. After a tough race, it was Australian Luis Leeds who came out on top, with the inaugural season starting on November 28.

Leeds appeared to be in control for the whole weekend having topped practice, qualifying and finally the race in front of a lively Mexican crowd. The Australian regularly competes in his national F4 series, but his detour proved that he can also cut it on the international stage.

He kept the lead after a good start and kept out of trouble as his rivals battled for the final podium places behind. However; Leeds gap soon vanished after a retirement in the midfield brought out the safety car, bunching the field up.

The young Australian would soon retake control of the race and held on in front of the Mexican fans. He later commented on Social Media, expressing his satisfaction.

“Clean sweep of the first ever NACAM F4 round. Amazing weekend and amazing circuit. It was great to be a part of something very special with a crowd of over 100,000. Thanks to RAM Racing for the perfect car, Preston Hire, Peter O’Shea, my family and all my supporters. To be a part of a Formula 1 event and to win at such a meaningful circuit and is something I’ll never forget.”

Rounding out the podium were Mexican drivers, Alexis Carreño and Giancarlo Vecchi. Carreño was the only driver able to keep up with Leeds in the closing stages, but will leave the weekend with knowledge on how to improve before the real opening round at the end of the month.

The Mexican, who drove for the Martiga-EG team stressed that; “The competition was very strong and did not expect this result, I made a good start and we were in the fight [for the win].”

While Vecchi said “The team made a great car, we turned up without previous training, then we could not qualify and we’re now in third, I can not believe it. It is a fantastic result. We had to defend our podium yet because Ming was pushing me too but we hung on to third.”

Calvin Ming had been in contention early on, but was only able to collect fourth after troubles earlier in the race prevented him from challenging further up.

However; it was a poor race for many of the favourites, as French F4 regular, Axel Matus had problems early on after spinning on lap 5. He then went on to retire with only two laps to go, while behind him the Team RPL drivers also failed to cross the line.

Fernando Urrutia had qualified on the front row, but was unable to capitalise, with team mate Jose Sierra battling him on track to the excitement of the fans. Neither would finish the race after suffering mechanical issues.

By Charles Fox
4 Mins read
Gianluca Petecof will be joining the Formula 2 grid for 2021 with the rebranded Alpine team, TCF takes a look in how he has got to where he is today.
Formula 4

Emerson Fittipaldi Jr. to Race in Danish Formula 4 in 2021 with Sauber Academy Backing

By Paul Hensby
1 Mins read
The latest driver from the Fittipaldi family, Emerson Fittipaldi Jr., will race in Danish F4 in 2021.
Formula 1Formula 4