Tom Sharp became the sixth different winner in the Porsche Carrera Cup GB of 2015 by winning the finale at Brands Hatch with a drive that underlined a stealthy debut campaign in the category.

Yet stealthy somewhat undersells a year in which the former Ginetta man starred during one of the most competitive Carrera Cup GB campaigns ever; one in which he claimed the Rookie prize and the £50,000 reward that came with it.

“The decision to join the series was quite late. I was starting to question whether I wanted to continue after a couple of difficult British GT seasons,” Sharp tells us and he goes on to describe the attraction of the back-to-basics aspect of single make racing.

What most won’t realise is the struggle Sharp and the family based IDL Racing team went through during initial testing. “The media day was a real eye opener, we could see how much faster the other guys were,” he comments, which makes the eventual success all the more remarkable.

Sharp has quite a self-deprecating attitude which is most definitely not the norm for racing drivers and it is made even clearer through his thoughts on his targets for the year. “I never really thought it would be possible starting from scratch to get on the podium!”

The opening meeting at Brands Hatch was upon reflection a brilliant introduction to the series, with a fifth in the first race and then a determined drive in the follow-up that ended unfortunately with a gravel covered Porsche. At Spa-Francorchamps, “a real baptism of fire,” as Sharp describes it, a sixth was followed by a mechanical DNF.

The former-Ginetta man admits it wasn’t until the following round at Oulton Park that he felt properly comfortable in the car, a sixth and a fourth the reward. Then in Yorkshire at Croft a pair of fifths showed that the consistency was coming.

“The Porsche Supercup race in the summer break at Silverstone was the real turning point,” Sharp comments and it is hard to disagree with that summary. “Qualifying was great and the race was a bit tricky.” Said race was fraught and unfortunately the Carrera Cup GB contingent found themselves embroiled in some tough battles. Mainly involving each other. Sharp was definitely unlucky although he admits that he didn’t have the pace and if he had, the incidents probably would have been avoided. Self deprecation again.

As the title of the article suggests Sharp’s approach to the series and IDL Racing’s approach wasn’t conventional. The David vs Goliath element is always beloved by fans and seeing the little guys take the fight to the Redline Racing and Team Parker operations was a joy to behold. Sharp is honest though, “It wouldn’t have been my first choice but it goes to show that as a one car independent team, it can be done.”

Snetterton saw the combination take their first podium in race two, after an impressive fourth from the opener. “To go into it on our own and have that success was massive,” Sharp exclaims and you really get the feeling that these aren’t just standard racing driver throw-away lines. The success meant something.

Knockhill was a slight come down to a pair of sixths followed by fifth in the Silverstone opener and then a third in race two after a Webster/Meadows clash. However, returning to a point Sharp made earlier, you make your own luck and being there and ready to pounce on errors is a part of single-make racing.

“I was building up to Brands and I thought if I was going to get a decent result I could get it there. Although I didn’t think we would win one.” A second in the first race a warm-up for the second in which Tom dominated from from lights out to flag fall. He held off champion Dan Cammish and his Redline machine with a conviction that few could of anticipated. “Race one was tough and then we needed to make changes to the car for the second race,” Sharp reveals and adds that “learning the hard way probably helped us in the second race.”

After Sharp’s main rival for the Rookie prize Dino Zamparelli dominated the Silverstone meeting for GT Marques, the focus trackside switched from the done and dusted Pro class title fight to the £50,000 fate to be decided at Brands. “It is the best thing I have ever won,” Tom adds, although you sense that could be usurped in 2016.

“Knowing what we know now it will be great to start again next year,” is Sharp’s first comment on his 2016 prospects. “The long term ambition is to go to Le Mans,” he highlights and the pathway through the Supercup is also confirmed as a possibility.

Everything about Tom Sharp’s attitude to racing and the way he goes about it is a little bit different. You sense he is somebody who is intensely competitive but doesn’t allow this to overshadow the main reason he races; the enjoyment and the satisfaction it brings. A few last lines perfectly encapsulate a Carrera Cup GB success story from 2015. “It is a going to be good in 2016. The more competition the better. I am really looking forward to it.” 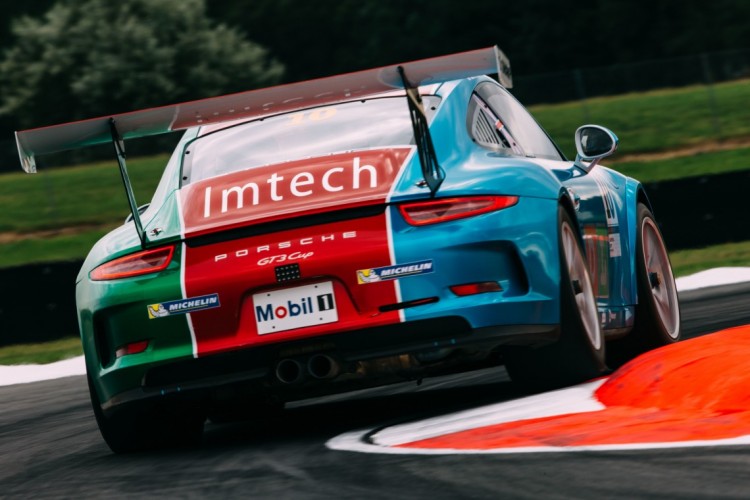 By Joe Ellis
5 Mins read
Given that he wasn’t sure if he’d be able to race each weekend, third in the championship was a mega effort by Scotland’s Gordie Mutch and his Fox Motorsport team.
British RallycrossInterviews

By Mark Cridland
3 Mins read
The rally and rallycross legend talks about his long and accident prone career as well as the future of Lydden Hill Race Circuit and British rallycross as a motorsport.
Porsche Carrera Cup GB