Charlie Eastwood is arguably the driver with the most impressive CV in terms of series raced in, of all the four finalists for the 2016/2017 Porsche Carrera Cup GB scholarship.

A former Karting World Champion Eastwood has spent previous seasons beginning the ascent up the single-seater ladder, firstly in BRDC Formula 4 and most recently with a dis-jointed and curtailed Formula Renault Eurocup campaign.

“I started racing karts when I was nine,” Eastwood begins. “I worked my way through the junior ranks in Ireland and the UK and then when I was fifteen I started making the move to racing abroad in Europe,” he follows on. Karting has been a common theme across the finalists, with both Eastwood and Hannah Pym achieving a great deal of success in the category.

Eastwood was runner-up in the British Championship of 2012, “which allowed me to get a ticket for the World Finals.” Against a depth of talent rarely seen in even the highest of circuit racing categories, Charlie emerged victorious and the success continued in Karting through 2013.

“If I had move out two years earlier or a year earlier, I wouldn’t have just missed out on success but also on the experience and the opportunity to mature,” offers Eastwood providing further evidence from the scholars of the benefits of extensive kart training before progressing further up the ladder.

In Formula 4 Eastwood did not quite achieve the same sort of success as he had previously in karting but for a rookie his performance was still impressive with two podiums in the final two meetings of the year.

This progress should have followed through into this season and a potentially vital Formula Renault Eurocup campaign with top sportscar outfit Strakka Racing. Unfortunately before the Silverstone meeting in May, Strakka withdrew from the series and Eastwood was left pondering his future.

“We finished the year off half-way through just because we weren’t really getting a lot out of it,” says Eastwood with a slight sense of frustration. Since his exit Eastwood’s attention has turned to sportscars and the Carrera Cup GB. Charlie admits that despite the level he has reached, “I still have a lot to learn, a year and a half in a car isn’t that long in the grand scheme of things.”

The youngster continues a thread started by the other scholars in discussing a desire for a “professional career in motor sport”, adding his name to a list of drivers who feel that such a dream is no longer attainable in Formula 1.

“The Carrera Cup GB is the best option for us, with or without the scholarship, it is the best option for me,” comments Eastwood in yet another echoing of the sentiments of all the other scholars. Again the Porsche Mobil1 Supercup and World Endurance Championship is the long term dream here. “I’d love to get become part of the Porsche motor sport family and to try and win Le Mans with Porsche.”

Charlie Eastwood is a really enthusiastic youngster, who doesn’t seem to have lost any of that enthusiasm as some understandably do following the travails of a tough single-seater journey. You sense that he has a new focus and a strong belief that this is the opportunity for his career to start from a fresh point. He will be a great addition to the 2016 grid, with or without the scholarship. As will his three rivals for the prize. 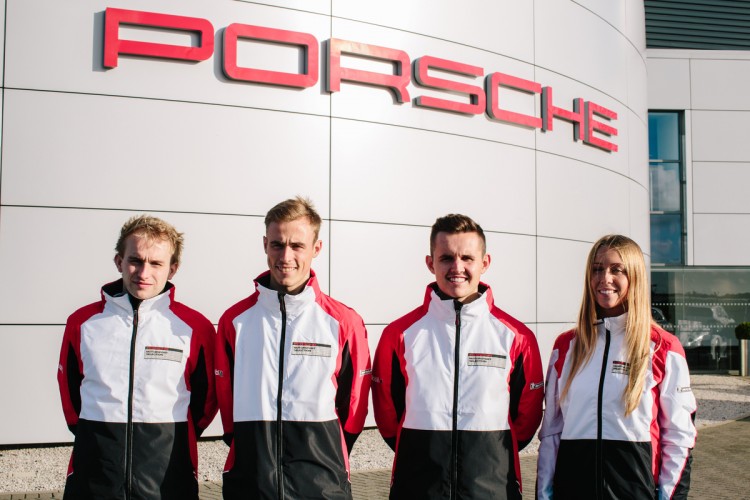