Andreas Mikkelsen – “I know what my expectations are”

At the age of 26, Andreas Mikkelsen already has two Intercontinental Rally Challenge titles, one FIA World Rally Championship win and sixty four WRC starts under his belt, and 2016 marks his sixth year with the Volkswagen Motorsport family.

Recent years have seen him threatening for an overall victory and 2015 was the breakthrough year, “It’s an incredible boost to finally get that first win,” Mikkelsen told theCheckeredFlag. “I’m sure there will be many more.” he adds.

While the WRC machinery remains largely the same for this year, the 2016 season sees a new challenge for the Norwegian with a new co-driver for the season ahead. Over the off-season Ola Floene has moved on to pastures new with Mads Østberg and will be replaced with Anders Jæger.

Speaking of his new co-driver he says “We have worked hard already, been testing with the car and now we are fully focused on everything that can help us be prepared for Monte. I strongly believe it’s all in the preparations. If you prefer for every outcome or whatever can happen, then you are always prepared!”

With the last rally of 2015 coming mid-November, it doesn’t leave much time before the new season is upon the WRC world, “We planned to have some time off, and then start creating plans for 2016. Instead we had the co-driver change which became a major thing. Since that it has been lots of preparation and working out.” 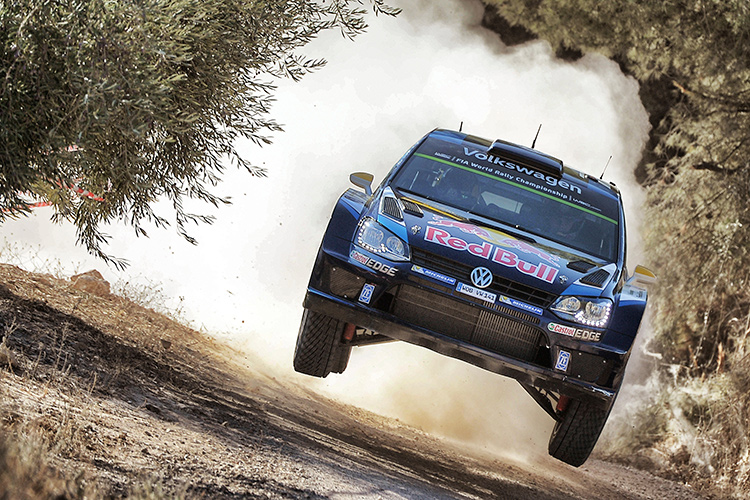 Mikkelsen flying through the air on his way to victory in Spain – Credit:@World

For 2016, Mikkelsen will be looking to build on the nine podiums he achieved in 2015 (including the victory in Spain) on the way to third place in the championship behind his fellow VW drivers, so it comes as no surprise as we asked him what he was most looking forward to about the new season he answers, “Getting some great results with my new co driver!”

With the Volkswagen Motorsport driver line up remaining in place, it is hard to look any further than another clean sweep by the German manufacturer, but we asked Mikkelsen saw as his biggest threat (other than his team mates) for the season ahead and he is quick to identify the Hyundai team, “I have to say that Thierry Neuville can easily be up there, [Hayden] Paddon also. Kris Meeke is also someone that you have to watch out for. “

As mentioned earlier, the 2016 car specifications remain pretty much unchanged as the sport looks forward to the new specifications coming in 2017. Mikkelsen has already had chance to test the new car and is clearly excited by the new rule changes. “It will lead to faster stage times! More down force. More power.” he confirms.

On a closing note we asked what his expectations for Monte-Carlo and the season ahead, “I know what my expectations are, but with the new co-driver onboard, I’m not sharing them! But a good result, obviously!”

The 2016 FIA World Rally Championship season gets underway in Monte-Carlo on 21 January and theCheckeredFlag will have full coverage of the rally from WRC through to WRC3.

Kristoffersson wants to do World RX even if it will be only...

Not the greatest start at the Rally Mexico for the Hyundai Motorsport...

IndyCar and NASCAR Indianapolis doubleheader to run behind...

W Series Will Not Return to Track in...