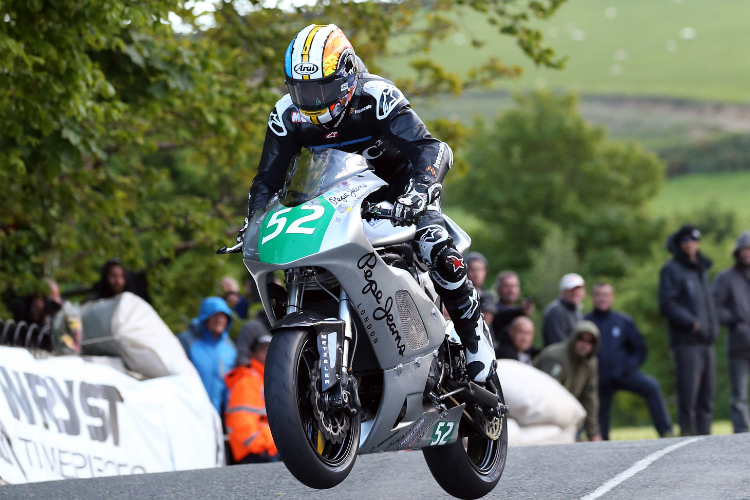 The British Motorcycle Manufacturing Academy (BMMA), in partnership with Norton, have announced their return to the Isle of Man TT with Adam Child

The team will take part in the highly competitive Lightweight TT event with Child, MCN’s senior road tester, at the helm.

This will be Child’s fifth Isle of Man TT and he is key to the development of the new machine.

Child said: ““I messed up last year, it was my fault, I just took my eye off the ball for a second and crashed, it was no fault of the bike. The lads worked their socks off, really grafted and I’m desperate to give them a good result this year. It’s a hugely interesting and rewarding project working with the students and I’m looking forward to another year.”

Students on the apprenticeship program run by the BMMA at Norton Headquarters, Donington Park, will once again be primarily running the project.

The team had a tough time of things at last year’s event as they tried to compete against some of the top road racers around.

The squad spent hours trying to rebuild their machine following Child’s crash on the mountain section during the practice week. The bike showed promise in the race, but the team were forced to retire on the second lap due to a mechanical problem.

Since then the team, made up of students under the age of 21, have been gaining valuable experience in events such as the Scarborough Gold Cup. At that event the team has an impressive seventh place finish in their very first race.

Head of design and executive director Simon Skinner believes the team are going into this year’s TT full of confidence.

He said: “The young team were thrown in at the deep end last year and learnt so much, nothing beats live racing and it doesn’t come much harder than the TT. Chad is back on board working closely the students who are gaining from his vast experience.

“The young team are growing in confidence, they have the potential to surprise a few people this year. Again the young team will be working in partnership with the factory Norton Team.”