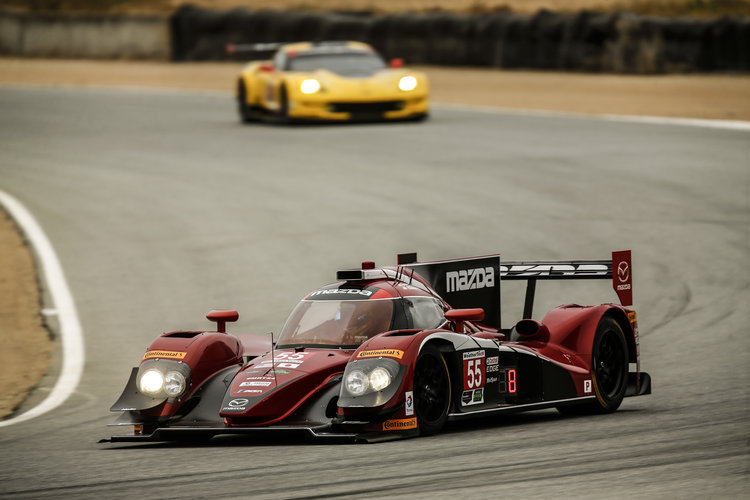 Mazda followed up its one-two result in first practice for the IMSA WeatherTech Sportscar Championship visit to Laguna Seca by repeating the feat on Friday afternoon.

Jonathan Bomarito set the fastest lap of the second 60 minute session aboard the #55 Mazda Prototype.

Although his 1:18.139s effort was not enough to eclipse the fastest lap of the day set by Mazda’s Tom Long, Bomarito managed to hold off the sister car in the afternoon.

Long ended FP2 second quickest, 0.693 seconds down in the identical #55 Mazda which ended the session early after Joel Miller spun at the Corkscrew.

Third overall was the Michael Shank Racing Ligier JS P2, which in the hands of Oswaldo Negri Jr set a 1:19.065s best to complete a second consecutive all-LMP2 top three.

In another repeat of the morning’s times, Wayne Taylor Racing finished fourth with its #10 Corvette Daytona Prototype, as Panoz DeltaWing Racing once again rounded out the top five.

The GTLM category saw the Scuderia Corsa Ferrari 488 lead the way for the second straight session, but this time it was Daniel Serra topping the timesheets following Alessandro Pier Guidi’s hard work in the morning.

Serra’s 1:22.981s time set halfway through the session stood as the quickest of the afternoon, while Pier Guidi’s 1:22.975s held out as the fastest lap of day one.

Second in FP2 was the Chip Ganassi Racing-entered #67 Ford GT of Ryan Briscoe and Richard Westbrook, with the #66 sister car of Joey Hand and Dirk Muller completing the top three.

In Prototype Challenge, CORE Autosport’s Colin Braun secured the top spot in class with a 1:19.673s time aboard the #52 Oreca FLM09.

Braun trailed Starworks Motorsport driver Renger van der Zande in the earlier session, but turned things around in the afternoon as the CORE driver sprinted to a margin of 0.723 seconds.

GT Daytona ended with a fastest lap of the day for the Alex Job Racing Porsche 911 GT3-R, thanks to Mario Farnbacher’s 1:25.390s effort.