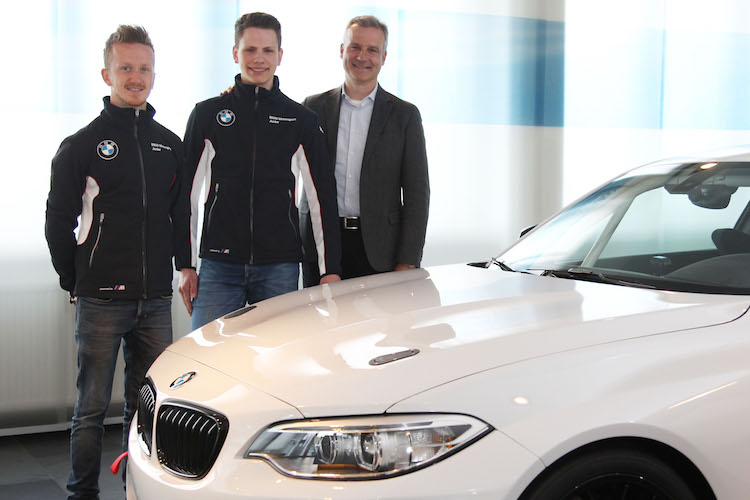 Rising star of British single-seater racing Ricky Collard has been named a BMW Motorsport Junior at an event held by the German manufacturer.

BRDC Formula 3 driver Collard has shown he has natural pace since starting his single-seater career in Formula Ford in 2014, before finishing runner up in the inaugural MSA Formula championship last year.

“I am very proud to be part of this programme,” said Collard. “For me, this is a fantastic chance to develop further as a racing driver. So far, I only have experience of single-seater cars. I will now contest my first touring car races in the BMW M235i Racing. I am sure I will receive a lot of valuable tips from our head instructor Dirk Adorf. And perhaps my dad can give me the odd piece of advice.”

Indeed, for anyone that didn’t know, Ricky’s Dad Rob is a BTCC regular racing in BMWs for almost ten years now and is in a good position to help his son before his first race in the BMW M235i.

Confirmed alongside the Brit is German Nico Menzel who finished third in last year’s Porsche Carrera Cup Asia championship claiming two wins and four podiums in 14 races and has learnt valuable tips from his father Christian Menzel who won the Nurburgring 24 Hours in 1998 in a BMW 320d.

Menzel said: “It is fantastic to be back in the BMW family after 2013 [where he competed in the Formula BMW Talent Cup]. I still know a few people from back then and am looking forward to an exciting and varied programme over the coming months. The prospect of racing on the Nordschleife is obviously particularly appealing to me, as I only live ten minutes from the circuit. I think it is going to be a great year.”

Both of them follow in the footsteps of last year’s Juniors Jesse Krohn and Luis Delétraz who find themselves competing in ADAC GT Masters this year behind the wheel of a BMW M6 GT3.

Dirk Adorf, the head instructor in the BMW Motorsport Junior programme, said:  “I am happy that the shootout produced two drivers who are as promising and talented as Ricky and Nico, who we can train over the coming months. I particularly enjoyed seeing all three year groups together at the Welcome Event. I think the paths being forged by Jesse and Louis at BMW Motorsport are very good examples and a great incentive for the next generation. Ricky and Nico can see first hand what they can achieve on the BMW Motorsport Junior programme.”

By Josh Disborough
5 Mins read
This weekend sees the GT World Challenge roar into its marquee event: The Total Spa 24 Hours. GPX and Porsche will be looking to defend their win from last season but their are plenty of crews wanting to make sure it doesn’t happen.