The WTCC moved to Hungary for its third weekend of racing which saw the Honda’s and Lada’s gain success ballast due to their performances in France and Slovakia whilst the Citroen’s remain at the maximum weight of 80 kilos. Two time champion Jose Maria Lopez pulled out a stunning lap in Q3 to take pole position for the Main Race whilst Sebastian Loeb Racing’s Mehdi Bennani started form pole in the Opening race.

On Race day, which took place in wet conditions, Bennani kept his wits about him led home team mate Tom Chilton to score the teams first ever 1-2 finish whilst an error in tyre strategy saw Citroen team-mates Lopez and Yvan Muller non-score for the first time since the team entered the WTCC as well as both Huff and Moteiro fail to score. Local hero Norbert Michelisz suffered a blown turbo and retired from the race in front of his home crowd whilst Lada Sport’s Nicky Catsburg completed the podium in third place with Fredrik Ekblom finishing in fourth.

In the Main race, Lopez took the win from pole as his team-mate Muller was embroiled in a fight for position with Honda driver Rob Huff. The British driver managed to pass Muller during the race, however he was penalised for contact with the Frenchman and fell to ninth place. Huff would fight back to finish in sixth position. Behind this fight saw Tiago Monteiro come home in third place behind the two Citroen’s whilst Cyan Racing took its best ever finish so far as Thed Bjork guided his Volvo S60 TC1 to fourth place.

Lopez now leads the Drivers Championship by 12 points from Monteiro as the series heads to the historic Nurburgring in Germany, where the WTCC field will be joined on track by the FIA ETCC competitors on the 14 mile circuit.

The TCR International Series moved to the former Grand Prix circuit of Estoril for its second weekend of racing. B3 Racing’s Mat’o Homola took pole position for the first race in his SEAT Leon ahead of WestCoast Racing’s Gianni Morbidelli in his Honda Civic with the Leopard Racing Volkswagen Golf’s of Jean-Karl Vernay and 2015 TCR Champion Stefano Comini on row two. Loris Hezemans finished in tenth place and would start race two from pole with Englishman James Nash beside him.

Homola would take the lead from the start of the race, however he suffered from race long pressure by Morbidelli and increased tyre wear would eventually mean that the Italian would pass him and go on to take his first win in 2016. Both Vernay and Comini would pass the B3 Racing driver who would finish in fourth place whilst Lukoil Craft-Bamboo’s Sergey Afanasyev would complete the top five. Championship leader Pepe Oriola would carry 30 kilos of weight in his car, car of his two wins in Bahrain, but he could only come home in eighth place.

Race two saw Hezemanns make a slow start from pole and pull off at the first turn whilst Lukoil Craft-Bamboo’s James Nash would go on to build a commanding lead that he would not lose. Behind the Englishman, Comini passed his team-mate Vernay for second and would stay there as he was unable to offer a challenge to Nash, whilst Morbidelli would enter into a thrilling battle with Vernay. The Italian driver would eventually pass the Frenchman near the end of the race with Afanasyev would end a strong weekend by finishing in fourth place with Vernay ending up fifth. 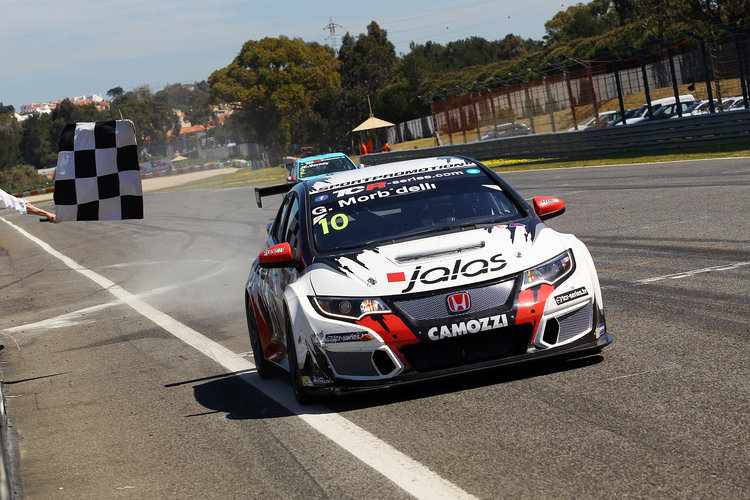 Gianni Morbidelli now leads the Drivers Championship on 70 points with Nash in second place only one point behind him. The The TCR International Series now heads to the iconic Spa-Francochamps circuit in Belgium where it will share the bill with the FIA World Endurance Championship.

The Michelin Clio Cup series was in action at Pembrey, Wales over the weekend, you can read all about the on track action here.

By Samuel Gill
1 Mins read
TCR Australia star Aaron Cameron is set to join up with Halfords Yuasa Racing for a test at Silverstone this week for his first taste of BTCC action.
TCR EuropeTCR International SeriesTouring Cars

By Phil Kinch
11 Mins read
During 2019, The Checkered Flag is rounding up the news and results from the various TCR Series around the world on a weekly basis.