Jonny Adam and Derek Johnston took a magnificent victory at the second round of the British GT Championship at Rockingham going from pole position all the way to the chequered flag.

At the start Alisdair McCaig in the Black Bull Ecurie Ecosse McLaren 650S tried a daring manoeuvre round the outside of Johnston’s TF Sport Aston Martin on the banked turn one but being on the outside on the run down to the Deene Hairpin allowed Johnston to speed back past and keep the lead going round towards Yentwood.

He got round Yentwood unscathed but the same couldn’t be said for the #32 Tolman Motorsport Ginetta with Ian Stinton behind the wheel as he got dive-bombed by the Optimum Motorsport Audi R8 LMS which broke the Tolman’s rear suspension and damaged the steering in the #1 Beechdean AMR Aston Martin with Andrew Howard driving.

The Ginetta would limp back to the pits and after repairs tried to go back out, but the damage was too great for the car to finish the race.

Back at the front and Lee Mowle was the biggest mover as the field negotiated the first lap as he jumped from eighth to fourth with some handy moves in the pack.

In GT4 pole-sitter Graham Johnson also had a mega start in the PMW World Expo Racing Ginetta G55 GT4 to the extent that he had overtaken three GT3s by the end of the first lap with Matthew George in the Generation AMR SuperRacing Aston Martin Vantage holding station in second place with Sandy Mitchell in the McLaren 570S GT4  sitting in third.

Ten minutes in and Liam Griffin was showing just how fast the Barwell Motorsport Lamborghini Huracan GT3s are as he squeezed by the McCaig McLaren at Tarzan Hairpin and moved up into second place.

He may have already left it too late though as Johnston was extending his lead by near enough a second every lap through and quickly built up a lead of over five seconds from the rest of the field.

Johnston may have been building up the gaps but he wasn’t setting fastest lap, that went to Rick Parfitt in the Bentley Continental GT3 that was running in seventh at the time – he set a 1:18.945. He didn’t have chance to use that pace to make up any positions though, he inherited sixth place after Will Moore received a penalty in his Audi for causing the earlier collision with the #32.

That said, Parfitt did have a good handle on how to best use traffic to his advantage as he navigated a gaggle of GT4 cars faster than Andrew Howard and swept past him on the inside of turn one to claim fifth place.

Graham Johnson was having none of these issues with rivals as Mitchell moved into second place in the McLaren GT4 but couldn’t make inroads in to the PMW car’s lead.

On the move in GT3 was Jon Minshaw in the Demon Tweeks liveried Lamborghini who managed to be the last of the late brakers going into the Deene Hairpin and got past McCaig for third place. However, he slowed down so much coming out of the hairpin that McCaig fell into the clutches of the Team Parker Racing Bentley which was looking ever more speedy as the two-hour race progressed.

A lap later and Parfitt would put the McLaren in his rear-view mirror. But an incident at Deene involving Parfitt and Minshaw would see them both run on at the hairpin and gift third place back to McCaig.

Will Moore was a touch too exuberant on the first lap of the race (Credit: Nick Smith/TheImageTeam.com)

That gap quickly extended as an unspecified problem with the McLaren saw McCaig drop ten seconds off the pace and hand third back to Minshaw. He slowly got back up to speed after a good number of laps and refused to pit until he desperately needed to when the pit window opened for the whole grid.

Just as the pit stops began, Parfitt would have to make two visits to pit road as he was given a ten second stop/go penalty for an incident with the Simpson Motorsport Ginetta of Nick Jones & Scott Malvern. That stop would be inadvertently extended as the car had issues getting going again from the penalty box.

As the pit stops came through, the 20 second pitstop penalty given to the leaders thanks to their win at Brands Hatch was thought by Adam to have been a potential hinderance to their victory, but good pitstop strategy by the team yet again saw them come out second on the road. However, the leader was Will Moore who delayed his stop a few laps and thus when he pulled in, Adam regained the lead for the #17 TF Sport car.

Another man who had taken his pitstop in the rush was Graham Johnson in the #50, no doubt he regretted that decision to delay his pitstop as he was tagged by the #5 PFL Motorsport Aston Martin on School Straight and retired from the GT4 lead.

That meant Ciaran Haggerty in the 570S would take the lead with Abbie Eaton in the Ebor GT Maserati settling into second place. Haggerty’s lead wouldn’t last long though as he was given a 5.8 second stop/go penalty for a short pitstop that relegated him down the order.

Unfortunately for the stunning Maserati, it didn’t have the pace to compete with other GT4 machines and quickly Jamie Chadwick got through in the SuperRacing Aston to push the Italian marque down to third.

Chadwick would then lead the class after the McLaren’s penalty but Nathan Freke in the Century Motorsport Ginetta was carrying on the good work of Anna Walewska to bring the University of Bolton backed car from the back of the grid to the lead of the class in less than 100 minutes.

In GT3 the two Lamborghinis now in the hands of Adam Carroll and Phil Keen were nose-to-tail for second place with Carroll being unable to catch up with Jonny Adam but not fast enough to stop Keen from sitting right behind him. 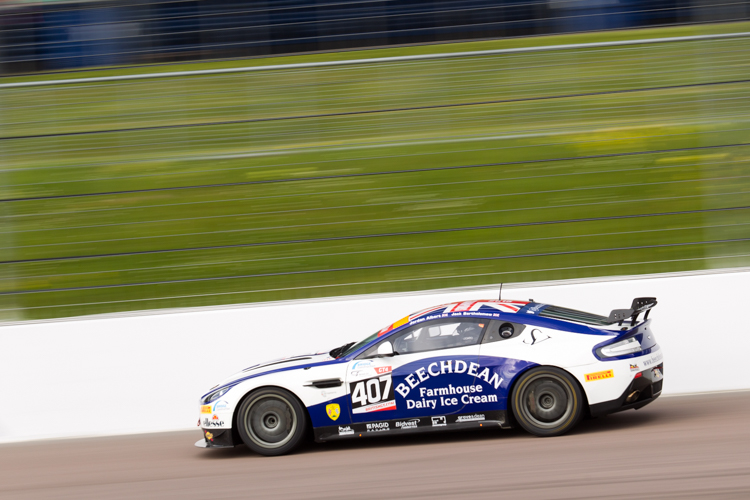 Lap after lap they continued their battle continued which only resolved itself after Carroll was given a drive-through penalty for overtaking under the safety car – which was called for for a single lap after a McLaren stopped at the Deene Hairpin and then got going again.

Into the final quarter of the race and in GT4 the front battle took another twist as Jamie Chadwick had to retire the SuperRacing Aston after it slowed coming round the speedway banking.

That meant the GT4 battle ended with Freke crossing the line with a mammoth 30 second lead over Jordan Albert & Jack Bartholomew in the Baby Beechdean AMR who themselves had a handy lead over the second Century Motorsport car of Aleksander Schjerpen and Sean Byrne for their first podium of the year.

However, after the race it was confirmed that the #73 of Freke and Walewska was excluded for overtaking under yellow flags, promoting the Beechdean crew to the race win.

Back into GT3 and Keen would settle into his second place but Ross Gunn in the Beechdean AMR GT3 was in third place and not willing to finish there as he was within 0.5s of the Lamborghini for the final 15 minutes of the race. It looked like he could make a move but traffic conspired against the young Gunn and he would finish in third place.

After the race, Andrew Howard would praise Gunn for not trying to force a move for second commenting on the GT4 champions maturity in knowing when not to make a move.

Behind them, Carroll would finish fourth in the second Lamborghini and Ross Wylie would finish fifth in the Motorbase Performance car used at Monza last weekend because the car Phil Dryburgh crashed at Brands is a complete write-off.

The next round of the British GT Championship is at Oulton Park at the end of May for the first two one-hour double-header races of the year.