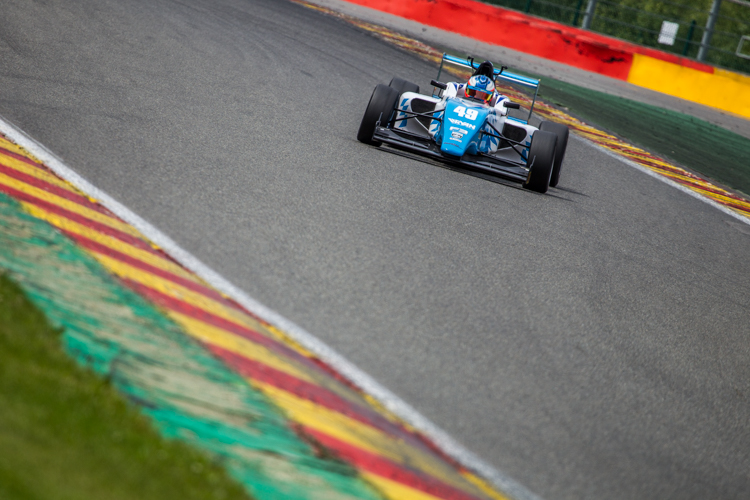 A slow start to weekend saw Thomas Randle pull his way through from ninth to claim victory over the competition and reignite his BRDC British F3 championship chances.

The result from Friday left Al Faisal Al Zubair on pole. The Omani driver kept the lead into turn one, but was pushed back into the midfield by the end of the second sector.

This left Tarun Reddy to inherit the lead as the Douglas Motorsport cars of Enaam Ahmed and the quick starting Randle moved up behind him. With Toby Sowery splitting the leaders, the top four broke away from the rest of the field.

Not wanting to hold back, Sowery took the lead into the final corner. Reddy though, wasn’t prepared to roll over, continuing to fight for the next half a dozen laps.

Fastest laps were vital, and Leist caught the lead train as the Carlin‘s behind built a difference in order to find clean track. The Brazilian was on the move and took Ahmed after a mistake for the Brit before disposing of Randle down the Kemmel Straight.

Reddy and Sowery continued to battle for lead, but it was the Indian who came out behind. Behind them the Carlin duo finally caught up as Lando Norris squeezed his way past Leist. It didn’t last long though, as a loss of momentum saw him demoted. Norris eventually pitted after a scrap with Ricky Collard, retiring the car after setting quick laps.

Randle joined the battle for the lead, flying past Reddy and eventually Sowery. The former MSV F3 cup winner pushed the Australian, but Randle held on to claim only his second win of the year.

Drama on the final few laps saw the fight for the podium intensify. Reddy claimed third as Ahmed and Leist rounded out the top five. Collard failed to keep up with the leaders, crossing the line in sixth as Sisa Ngebulana and team mate Ben Hingley completed the leading eight.