Basking in the Florida sun, the new generation of prototypes took to the famed banking for the first time in anger and immediately an order seemed to fall into place as the Cadillac DPi crews set the early pace. The first to set a competitive lap was the Konica Minolta machine of Ricky Taylor with a 1:39.428 to keep the Mustang Sampling team – ran by the Action Express Racing crew – in second for the time being.

The battle between the pair would continue for the vast majority of the 15 minute session with Joao Barbosa regularly taking the Mustang Sampling machine up into pole position only to see Taylor jump back ahead. Barbosa would have the last laugh though as his 1:36.903 saw him claim pole position, and a late improvement by Dane Cameron in the Whelen Engineering Cadillac DPi and Neel Jani in the Rebellion Racing Oreca 07 LMP2 meant Taylor would slip down to fourth place.

Fifth place went to another take on the DPi regulations as Tequila Patron ESM’s Brendon Hartley took the team’s Nissan DPi to half a second off the pace of the top four as the sister Nissan of Ryan Dalziel finished another half-second further back in fifth.

Of note slightly further down the Prototype class, the only Ligier JSP217 taking on the IMSA WeatherTech SportsCar Championship season-opener – the PR1/Mathiasen Motorsports entry –  finished in eighth place at the hands of Tom Kimber-Smith.

It was apparent a Ford was going to be on GTLM pole, but the question was which one would it be? (Credit: Craig Robertson/Speed Chills)

The GT Le Mans class was the Ford show as soon as the green flag dropped, with the #66 Ford Chip Ganassi Racing machine of Joey Hand setting an early flier of 1:45.203 to set an early target for class rivals to beat.

That was a challenge Porsche North America was more than happy to accept as Patrick Pilet in the #911 Porsche 911 GT3 RSR dipped into the 1:44s before being knocked into second by Kevin Estre in the #912 Porsche.

They both found themselves looking upwards soon though as that German thunder seemed to upset the boys from Detroit as Olivier Pla in the #68 Ford GT set a 1:44.555 and Hand logged a 1:44.203 to lock out the front row. The duo was made a trio when the #67 of Richard Westbrook split the pair with just five minutes remaining to make the front three an aesthetically pleasing sequence of #66, #67 and #68.

Behind them, the early Porsche pace couldn’t be maintained as Toni Villander in the Risi Competizione Ferrari 488 jumped ahead of the #911 into fourth and the #912 falling to eighth – Andy Priaulx’s #69 Ford GT and the #3 Corvette Racing Corvette C7.R of Jan Magnussen jumping above Estre. 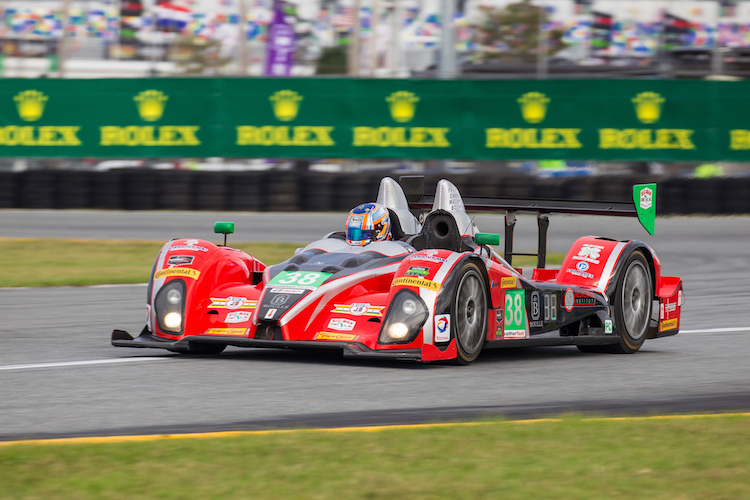 Prototype Challenge didn’t have quite as much action, the class is making its final appearance at Daytona and just five entries took to the oval where it was apparent that some had better pace than others. Claiming pole position was James French in the #38 Performance Tech Motorsports Oreca FLM09 who’s 1:42.559 was almost a second faster than Johnny Mowlem in the BAR1 Motorsports car. The Brit was one-tenth of a second ahead of the sister #20 car of Buddy Rice.

GT Daytona was typically action-packed with 27 entries all looking to do battle. With so many cars, times were changing almost by the second and Jeff Segal was the first driver to set a time in the new-for-2017 Acura NSX ran by Michael Shank Racing with a 1:49.444.

After that, the biggest movement at the top of the times was when Alessandro Pier Guidi in the #51 Spirit of Race Ferrari 488 knocked two seconds off Segal’s lap with a 1:47.696. That was quickly improved upon with a 1:47.099 to put a sliver of light between the Ferrari and last year’s GTD class champions Scuderia Corsa who are also racing a Ferrari 488.

Rounding out the podium is the only Aston Martin V8 Vantage racing in Florida this weekend as Marco Sorensen in the #98 Aston Martin Racing machine set a 1:47.734 to finish half-a-second behind the lead pair.