Alex Lynn ended the eighth hour of the 2017 Mobil 1 12 Hours of Sebring in the lead, as brilliant strategy and pitwork saw the #10 Wayne Taylor Racing Cadillac grab the lead from Christian Fittipaldi in the #5 Mustang Sampling Racing.

The hour ended under caution when the #14 3GT Lexus RC-F of Sage Karam ground to a halt at the back of the circuit.

Ricky Taylor in the Wayne Taylor Cadillac grabbed the lead Fittipaldi when made an earlier stop.

Taylor pitted five laps after him, though his attempts to create a gap were dented by traffic.

When Fittipaldi passed Taylor when he finally dived into the pits, the gap was 9.2 seconds.

However, Taylor slowly eroded the gap and was soon right of the #5’s back bumper by the time both cars made their pitstops.

The lower fuel load meant that the #10 came out ahead of the #5 with a five second gap despite doing a driver and tyre change.

This meant that Alex Lynn inherited the lead but the Sebring rookie’s lead was quickly whittled down by Fittipaldi.

Yet Lynn held his nerve and managed to extend the lead to five seconds by the time the caution was called. 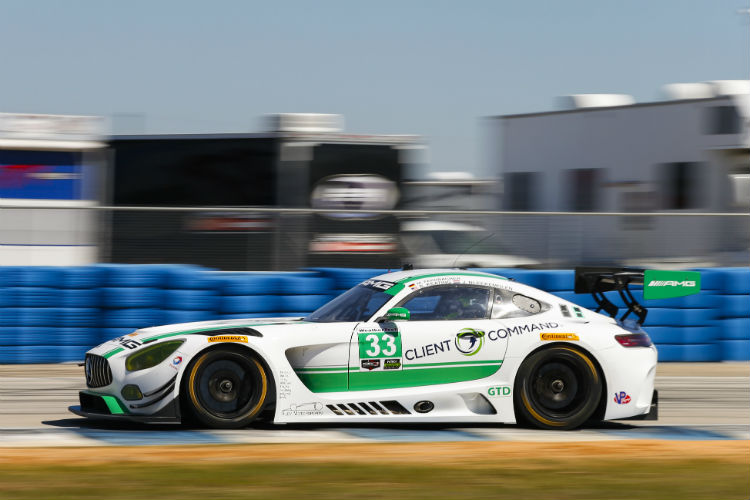 The GTD leading #33 Riley Motorsports Mercedes AMG of Ben Keating, which has lead GTD for the majority of the day. Credit: IMSA

The #85 JDC-Miller Motorsports continues to run in third, a fantastic performance for the Pro/Am team run by driver/owner Chris Miller, just ahead of the recovering #31 Whelen Engineering Cadillac of Eric Curran, now on same lap of the #85.

Kyle Masson in the #38 Performance Tech Motorsports continues to lead Maxwell Hanratty in the #8 Starworks Motorsports car by a minute in PC.

Ford continue to dominate GTLM as the #68 Ford GT of Billy Johnson leads but for the first time in the race, Porsche find themselves in a leading position, with the #911 Porsche of Frederic Makowiecki lying in second.

Ryan Briscoe in the #67 Ford GT lies in third just ahead of the remaining Ford, the #66 of Dirk Mueller.

In GTD the #33 Riley Motorsports Mercedes Amateur driver Ben Keating  managed to retain the lead against Pro drivers such as Matteo Cressoni and Bryan Sellers.

Keating handed the Mercedes over to Mario Farnbacher in the lead and Super Mario extended the gap over Alessandro Balzan in the #63 Scuderia Corsa Ferrari and Christian Engelhart in the #11 GRT Grasser Racing Team Lamborghini.