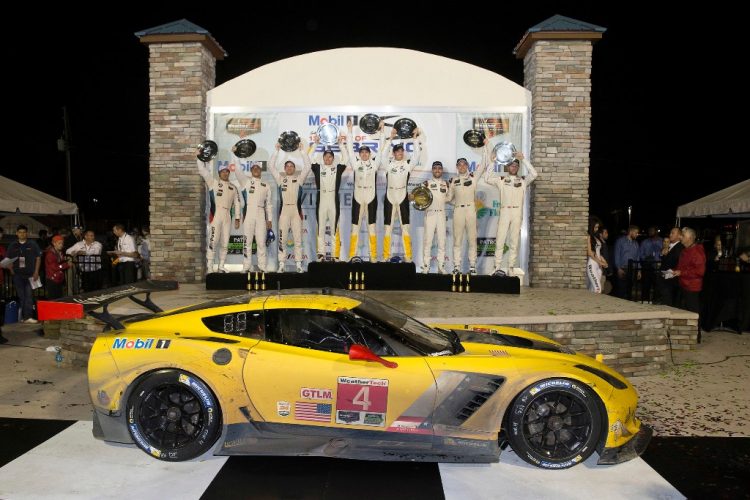 Oliver Gavin heads to the 2017 12 Hours of Sebring in high confidence having tasted victory in 2016 for Corvette.

“This is one of the biggest races of the year for us and we as a team have had ten class wins since 2002 and I’ve won five times, so naturally I am keen to add to that tally if at all possible.” Oliver Gavin stated ahead of this weekend’s race: Mobil 1 12 Hours of Sebring Fueled by Fresh From Florida.

Sebring hosts the second round of the IMSA WeatherTech SportsCar Championship on March 18th, 2017, and the expectations of the 46-car strong field are high.

Gavin is joined in the Corvette Racing #4 Corvette C7.R by full season team-mate Tommy Milner and race team-mate Marcel Fässler and is hunting for another GT Le Mans class victory, as they achieved in the 2016 rendition of the 12-hour race. The trio raced together for the opening race of the season: the Rolex 24 Hours of Daytona. The #4 crew suffered from contact with a rival and managed to recover the car to finish 9th in class.

“The race is again very physical and it’s a hard, aggressive race with no margin for error as it’s a circuit that will really punish you.” Gavin explained, ahead of the 12-hour race he has had so much success around. “The weather doesn’t look to be an issue unlike last year where rain and bad weather really effected things. It will be nice to have a rain-free event this year. “We’ve done two tests already this year at Sebring and they both went well. Marcel had a decent amount of time in the car adapting to the higher levels of downforce than we had at Daytona. So, we’re all ready to go, we’ve worked hard on the race programme and the strategy.”

Ford dominated the GTLM field at the Rolex 24 Hours, managing to put three of their four cars at the front of the GTLM grid in qualifying. It was the #66 Ford Chip Ganassi Racing that took the class victory and the first GTLM victory of the 2017 season.

If Ford can reproduce the pace advantage they had at Daytona it may be very difficult for anyone to be a threat to the American team. Corvette and Gavin will be hoping that the pace deficit in the field will be a lot smaller for this race and that they can keep their Corvette C7.R out of trouble for the duration of the endurance race.