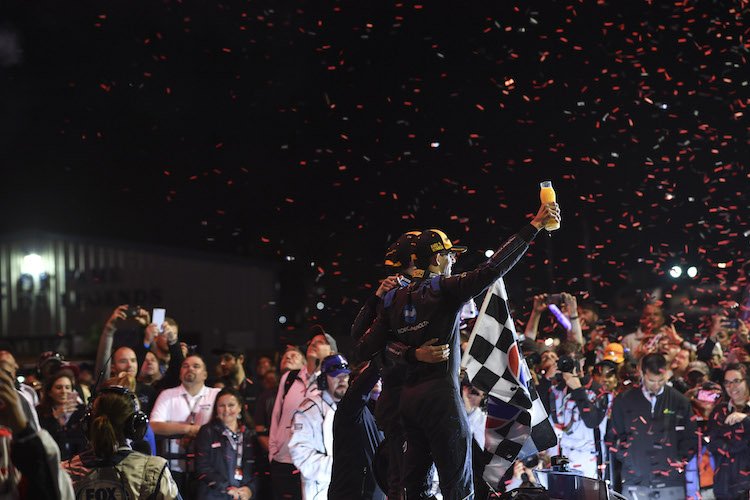 Wayne Taylor Racing are still on a high after winning an American sportscar tradition, the ‘Florida 36 Hours’ – victory at the Rolex 24 at Daytona and the Mobil 1 12 Hours of Sebring.

The Konica Minolta-backed team had a controversial victory at Daytona, after barging their way past the Mustang Sampling Racing Cadillac to claim victory in their own Cadillac, but redeemed themselves at Sebring with an all-conquering victory that saw them win by more than ten seconds on the airfield circuit.

“A 1-2-3 for Cadillac is unbelievable,” said Ricky Taylor. “To say that a brand-new car out of the box has run 36 hours of racing absolutely flawlessly, I don’t think that has ever happened. It is a testament to Cadillac and all of the development partners. It says so much about the brand and the serious effort they have brought to sportscar racing. The Cadillac is the toughest car to beat. The (No. 5) Mustang Sampling and (No. 31) Whelen cars are fast. I am sure they are going to bring it at Long Beach and the rest of the season.”

Leading 102 of the 106 laps completed at Sebring, the Wayne Taylor Racing crew of Ricky and brother Jordan Taylor were joined for the first time by the increasingly multi-talented Alex Lynn, who raved about the experience.

He said: “I am at a loss for words to describe it. Jordan and Ricky are amazing teammates. They drove an awesome race today. The team was flawless. It is 36 hours of zero problems for Cadillac on the racetrack. The team has won the two biggest races in America and a podium sweep for Cadillac today. A great result for all concerned.”

For Jordan, victory at the airfield allowed him to emulate his father and complete a remarkable career sweep of winning Sebring, Daytona, Petit Le Mans and the 24 Hours of Le Mans.

“I came into this weekend actually thinking how great it would be if my sons could duplicate the milestones that I was able to achieve in my career and to see those things actually happen is just unbelievable,” Team Principal Wayne Taylor said. “I’m just so happy for them, for Alex to be able to come here and win his very first race in America, for our entire team that has worked so hard, as well as our partners Konica Minolta and Cadillac and GM who we’ve been with for so very long. Without all of them, none of this would be possible. It took a while for it to sink in that we finally won the Daytona 24-hour. Now, I think it’s going to take a bit for it to sink in that we won Daytona and Sebring back-to-back – with our brand new Cadillac. It’s already been a season of memories that will last the rest of our lives.”