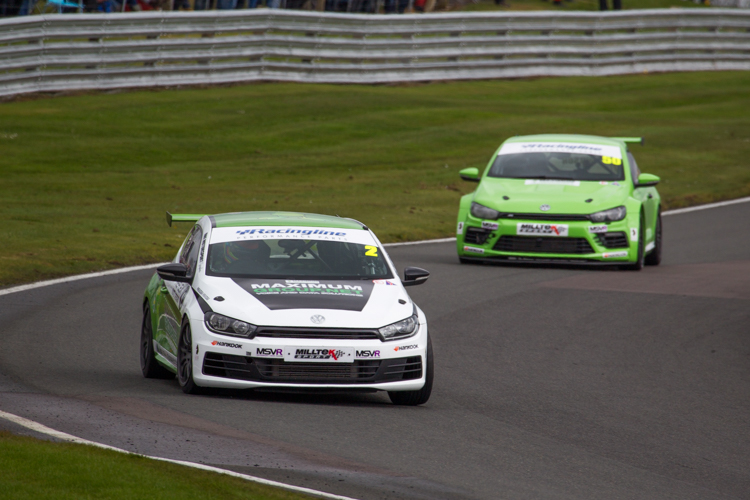 2016 runner-up Tom Witts took the honours in the second and final race of the weekend at Oulton Park. The result helps recover his VW Racing Cup chances after falling backwards in race one.

It was a dire start for polesitter Bobby Thompson who had lost his pole position before the first corner, dropping to third. It wouldn’t get any better as the Team HARD driver spun on the exit of Knickerbrook, clouting the barrier.

Witts had taken the advantage at the start, immediately finding himself under pressure from Phil House as a number of other drivers ran over the grass or spun in the drying conditions.

A quartet of drivers lined up for third, with Darrelle Wilson the first to break away slightly. This wouldn’t last long though with the car continuing to pump out black smoke. Kenan Dole was the first to catch up and took third before an engine blip out of Old Hall dropped Wilson down the order.

Joining them the Audi TT was race one winner Owen Walton with Kieran Gordon closely following. Gordon would eventually come out on top and caught up with Dole by the end of the race.

Across the line, Tom Witts took the flag, chased all the way by House. Dole would take third by less than 0.04 seconds from a fast approaching Gordon, as Paul Ivens and Jamie Bond completed the top six.

Disaster befell the Audi #91 though, with Walton running wide at Druids, hitting the tyre barrier and flipping fully onto its wheels on the other side. The barrier would need to be fixed as a result.