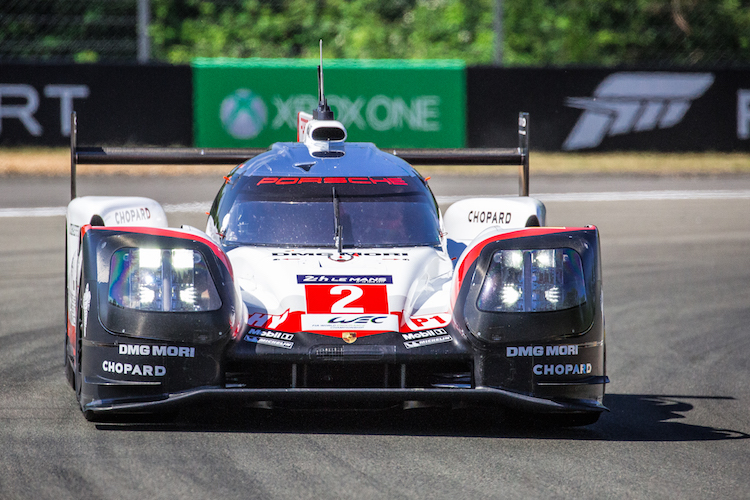 The shock of the last hour soon focused on the potentials of what the last two hours would hold. With the surprise of an LMP2 car leading the overall order opened up the opportunity for a non-LMP1 to win. Brendon Hartley handed the car over to Timo Bernhard at the beginning of the hour and both Porsche drivers pushed everything they could out of the car.

The GTE classes have stepped it up in the closing moments of this race. Wheel-to-wheel racing is easy to find as teams try and improve their current positions or pursuit a fight for the lead of the class.

Only two of the LMP1 cars are currently running in the 24 Hours of Le Mans, with the other four having stopped at various points in the race. Bernhard is chasing down the win from the #38 Jackie Chan DC Racing which has, as a consequence of four LMP1s dropping out, has inherited the overall lead. Bernhard is pushing hard and finishes this hour having passed the #38 of Ho Pin Tung for the lead of the 2017 24 Hours of Le Mans.

Sebastien Buemi cannot push for the win in the same respect, but he is chasing fastest laps. On lap 330, Buemi put in the new fastest lap of a 3:18.604. The lap record, set by Neel Jani in 2015, was a 3m17s and Buemi is probably aiming for that.

At least two LMP2 cars should end on the overall podium. The currently leading #38 should end up on the podium so long as there are no issues for it. The battle for third overall and second in the LMP2 class does mean, at the moment, the bottom step of the overall podium. There was some fantastic wheel-to-wheel racing between the #13 Vaillante Rebellion and the #35 Signatech Alpine in this hour for that precious bottom step.

Corvette Racing and Aston Martin Racing seem to be locked in a tight battle for the last few hours of the race, putting the pressure on each other to take the lead in class. The pit stop cycles are working in Aston Martin’s favour, putting them in front once everyone has pit. But Corvette was not giving up the fight that easily.

Pedro Lamy was on a mission this hour to recover some of the positions they lost earlier in the race when their tyre blew out in the night running. The pace of the Aston Martin clearly would have been enough to push for the win in class. However, Ferrari has put on a strong performance this weekend and are currently locking out the top three in the Am class.