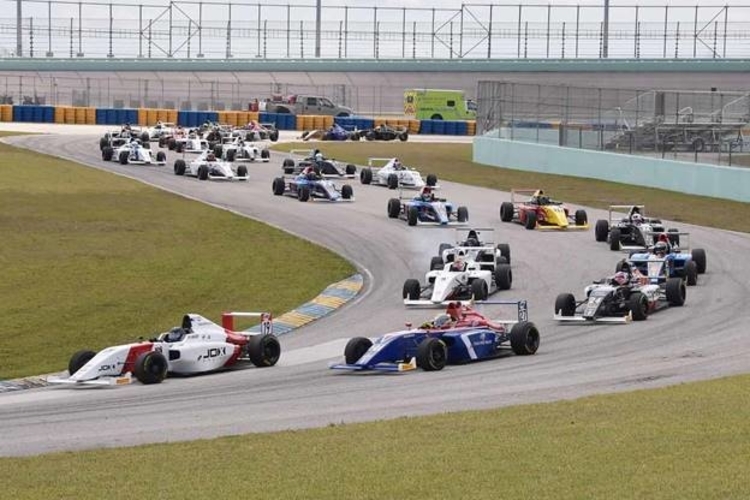 Formula One‘s United States Grand Prix will have one further support race during the weekend at the Circuit of the Americas, with the F4 US Championship announcing a final round at the venue.

The championship, which runs as an FIA F4 series had originally planned to have just six rounds this season, but will see the addition of one more event during the weekend of 20-22 October. In doing so it becomes the first F4 series to support both the FIA World Endurance Championship – in its penultimate round at COTA in September – and the Formula 1 in the same season.

“This a huge accomplishment for SCCA Pro to get the final race of the F4 U.S. Championship race at the USA Grand Prix,” GM of Onroak Automotive North America Max Crawford said. “The FIA has promoted F4 as a stepping stone to Formula 1, and this is a great opportunity for the F4 drivers to race in front of the F1 teams.”

Now in its second season, the championship, run by SCCA Pro Racing, regularly had 16 competitors in 2016, with that number doubled for the current season. Up to 35 drivers are expected for the season finale.

“The addition of the F4 U.S. Championship to the USA Grand Prix weekend signifies our place as one of the primary destinations for young drivers who have karting or other racing experience and wish to refine those skills, both on- and off-track,” SCCA Pro Racing Vice President Steve Oseth also commented.

“Honda and HPD are pleased to participate in the amazing growth in the 2017 season, and joining the Formula 1 United States Grand Prix at COTA shows the growing prestige of the F4 Championship.”

The series uses a Crawford F4-16 chassis, powered by a Honda K20 C2 (2.0L) engine. The series will be running two races instead of the usual three during their new season finale, due to stricter time constraints on Saturday.

By Charles Fox
4 Mins read
Gianluca Petecof will be joining the Formula 2 grid for 2021 with the rebranded Alpine team, TCF takes a look in how he has got to where he is today.
Formula 4

Emerson Fittipaldi Jr. to Race in Danish Formula 4 in 2021 with Sauber Academy Backing

By Paul Hensby
1 Mins read
The latest driver from the Fittipaldi family, Emerson Fittipaldi Jr., will race in Danish F4 in 2021.
Formula 1Formula 4