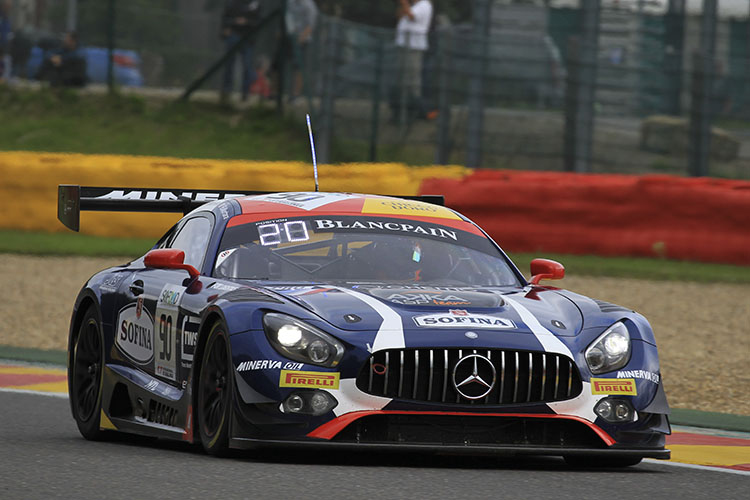 Akka ASP led the way in qualifying for the 2017 Total 24 hours of Spa that was cut short by five minutes with a huge backwards impact for the #00 Goodsmile Racing Mercedes-AMG GT3.

With temperatures dropping, most teams set their fastest times in the early half of the qualifying session and it was the #90 Eduardo Mortara, Michael Meadows and Raffaele Marciello who took only three laps to set the target time of 2:18.562.

While many would try, no one could dip below the fastest time, a few would record faster times through the first sector, but it was through the middle section that they would hit traffic or lose time. At the close of qualifying, the top thirty-four cars had set times within 1 second of the Akka ASP Mercedes.

The #2 Audi Sport Team WRT car of Connor de Phillippi, Christoper Mies and Frédéric Vervisch came the closest to the pole time, but ultimately could only get within 0.113 seconds.

#55 Kaspersky Motorsport of Giancarlo Fisichella, Marco Cioci and James Calado made steady improvement through their run with their eighth lap rewarding them with the third fastest time.

With just over five minutes remaining of the session the #00 Goodsmile Racing car lost control as it headed up Radillon, a high-speed spin saw the Mercedes-AMG GT3 bounce off the barriers as it impacted backwards, crushing the rear of the car and bringing the red flags out.

The lone Aston Martin of this years race recorded the fastest time in the ProAM class, leaving the #97 Oman Racing Team with TF Sport of Ahmad Al Harthy, Salih Yoluc, Jonny Adam, and Euan Hankey top of their class and sixth place overall.

#888 Kessel Racing’s team of Marco Zanuttini, Jacques Duyver, David Perel and Niki Cadei were top of the pile of Am competitors with the #991 SpeedLover Porsche getting the best of the two-way battle for the NAT class.