Barwell Motorsport stormed to an emphatic 1-2-3 in free practice 2 as championship leaders Jon Minshaw and Phil Keen in the #33 Lamborghini Huracan topped the timing sheets.

In GT4, Ebor GT completed a practice double, claiming fastest times through Charlie Fagg and Matthew Graham‘s #60 Maserati GT MC in both sessions upon their return to the British GT.

An electric lap time from the debuting #77 Barwell Motorsport Lamborghini Huracan of Adrian Amstutz and Patrick Kujala bagged the fastest first practice time early on in GT3, whilst the title-contending Barwell duo of Minshaw and Keen flanked the Blancpain pairing in second.

However, the Lamborghini dominance atop free practice 1 was soon halted, with an impressive effort from Macleod in the #7 Team Parker Racing Bentley alongside Ian Loggie enough to seal top spot by less than a tenth. 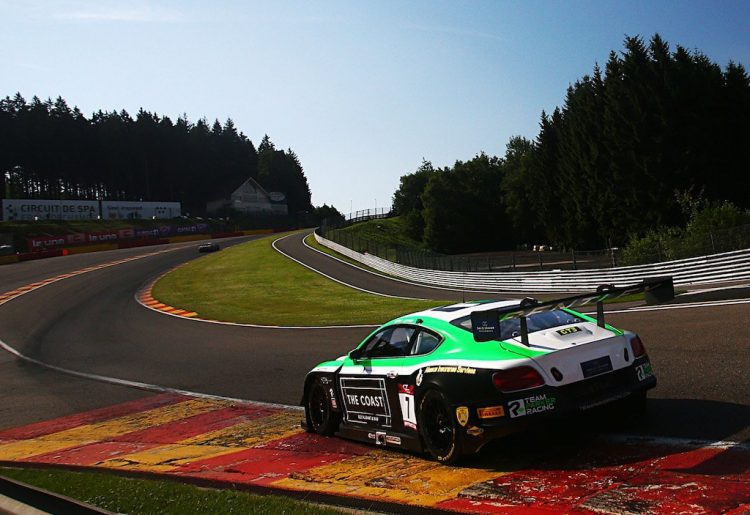 In GT4, a strong start from Ebor GT upon their return to the British GT saw the #60 Maserati GT MC power to the top of the timing sheets by an emphatic 1.3 seconds from the #53 UltraTek Racing Team RJN Nissan 370Z.

Heavy rear-side contact with the barrier 40 minutes into the opening session through turn 17 for the fifth-placed #21 Spirit of Race SA Ferrari 488 GT3 of Cameron sparked a brief red flag period, with the damage extensive enough to force the Silverstone podium-finisher and partner Matt Griffin out of action as Spa claimed its first victim of the event.

Free practice 2 saw another change at the top, with the 2016 Spa-Francorchamps winning #11 TF Sport Aston Martin of Jon Barnes and Mark Farmer powering to the front in the early exchanges of the second session.

Their advantage lasted only a matter of seconds, as the #6 Barwell Motorsport Lamborghini of Sam Tordoff and Liam Griffin soon clambered to the top spot, seven tenths faster than the Aston Martin’s earlier effort.

Rounding out the top three in GT3 were the sole remaining Ferrari squad of Kessel Racing, with Piti Bhirombhakdi and Carlo Van Dam clawing just under a second within the fastest time of the session.

Halfway through practice two, Barwell Motorsport locked out the top two, with GT3 championship leaders Minshaw and Keen in the #33 Lamborghini muscling ahead of their teammates in a show of strength ahead of the afternoon’s qualifying.

Soon after, Barwell capped their dominance late on as the #77 Lamborghini slotted into third, rounding out a Barwell 1-2-3 with the trio separated by half a second.

Whilst the #33 Lamborghini finished fastest in free practice 2, their title-rivals Seb Morris and Rick Parfitt Jr in the #31 Team Parker Racing Bentley were rooted to the bottom of GT3 – with the Silverstone winners hoping to rectify their early woes in time for a pivotal qualifying.

After two nightmarish rounds at Snetterton and Silverstone, teenage duo Middleton and Tregurtha ended practice two with the fastest GT4 time in the HHC Motorsport Ginetta, with GT4 championship leaders Lanan Racing only managing third fastest in the session.

All three were beaten to the fastest time by the impressively quick #53 UltraTek Nissan of Richard Taffinder and Martin Plowman, who complemented second in free practice 1 with another suitably speedy lap time in free practice 2.

However, the Nissan was yet again outmatched by the returning #60 Ebor GT Maserati, with the season debutants storming to an unlikely practice clean sweep.