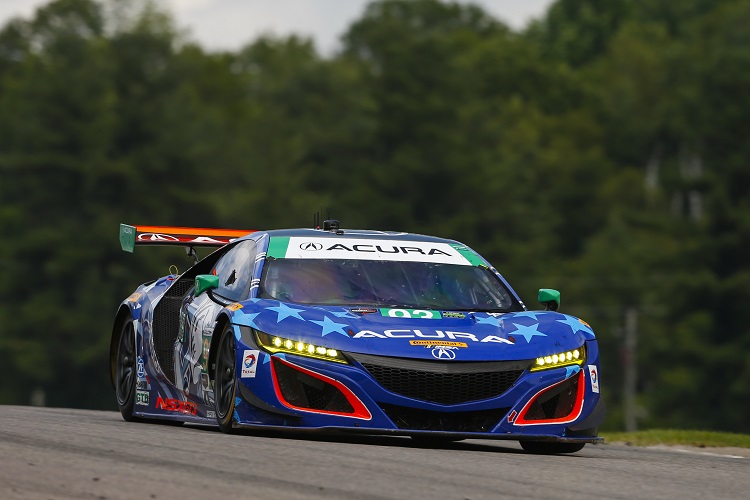 The partnership of Andy Lally and Katherine Legge in the #93 Acura NSX GT3 have hit a rich vein of form in recent races, with the duo giving the car it’s first IMSA victory around the streets of Detroit, but in the mixed conditions at the former home of the Formula 1 Canadian Grand Prix, they excelled once more, although they were denied victory by the #57 Stevenson Motorsports machine of Lawson Aschenbach and Andrew Davis.

Legge had put the team into podium contention in the early stages, climbing from sixth on the grid to run third, while Lally was made to work for the result, with rain on parts of the circuit making it a tricky afternoon, especially as the Shank car stayed on slick tyres, which ultimately was the right call.

“We were going for something that is rare in GT3 racing – three in a row – so to have two wins and a second, if you had told me that five weeks ago I’d have said “done deal,” but I found myself in the closing laps really digging,” said Lally.

“I hand it to Stevenson Motorsports (GTD winner) they did a really great job. Lawson (Aschenbach) did a great job closing. Our Acura handled every condition today from hot and greasy to cool to wet to super slippery conditions that nobody wanted to be in out there on slicks.

“I’m just thrilled. The Michael Shank Racing crew did a great job, our Acura performed flawlessly three races in a row. Nobody has scored more points than we have in the last three races. It’s a good thing when you’re disappointed with second. It’s good that we’ve risen to that level.

“The Acura is there, and we want to win at every track we go to. We gained in the championship on everybody in front of us and that’s a good place to be mid-season.”

Legge admitted it was good to get second and the points that came with it as they continue to edge up the GT Daytona class standings, and they now sit twenty-four points off the leading pairing of Alessandro Balzan and Christina Nielsen in the #63 Scuderia Corsa Ferrari.

“It’s all thanks to the Michael Shank Racing crew on our pit stops and Andy did some fantastic driving in some really, really difficult conditions at the end there. I’m just really proud of everyone on the team.”