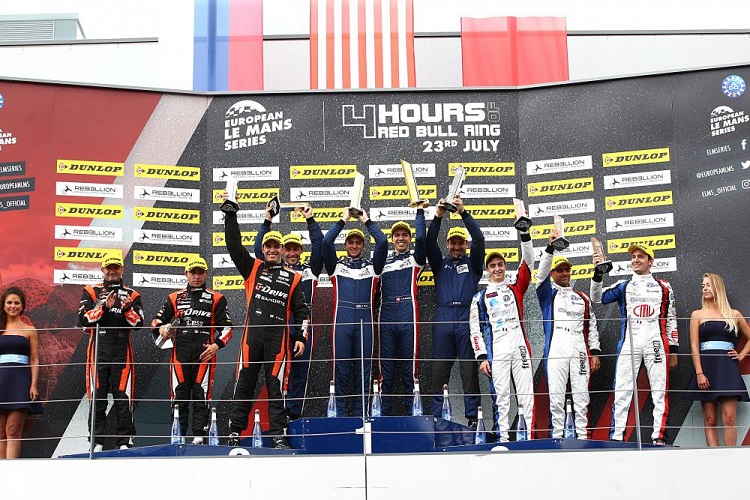 The #32 United Autosports LMP2 car took its second victory of the European Le Mans Series as the grid reconvened at the Red Bull Ring for the third round of the championship. It was a tight fight between the #32 and pole-sitting #22 G-Drive Racing to the chequered flag. It was a double victory for United Autosports on track as the #2 took the chequered flag first in LMP3. However, post-race penalties saw the #2 stripped of its win, giving it to #11 Eurointernational instead. After their disappointing outing at last race, where they could not convert their pole position into the class victory, the #55 Spirit of Race Ferrari came through the field to take an exciting win for their maiden victory this year.

Off the line, Leo Roussel maintained the lead that the #22 had starting from pole position and fed the 36-strong field around the track. The action formed behind him as the #21 DragonSpeed fell backwards to fourth. Hugo De Sadeleer and Timothe Buret took advantage of the poor start from Nicolas Lapierre in the #21 promoted them to second and third respectively.

The LMP2 field held steady until the first round of pit stops. De Sadeleer made the most of the tyre and fuel changes as he emerged from the pit lane to take the class and overall lead of the race. More issues befell the #21 DragonSpeed as a starter motor issue delayed them leaving pit lane and gave the lead over to #32 United Autosports.

With 90 minutes left of the race, the battle for the lead was between #32 United Autosports and #22 G-Drive Racing. The fight between Will Owen and Nicolas Minassian did not last very long as the Frenchman deposited Owen from the lead and started to dash off into the distance.

Splash and dash pit stops in the final 30 minutes of the race saw Filipe Alburquerque on a mission to retake the lead. 10 seconds split the G-Drive from the United Autosports car after their final pit stops and Alburquerque was pushing hard in his Ligier to close that gap down. At the chequered flag, Alburquerque had passed the #22 and held a 4.554 second lead over Roussel.

Just three races remain in the 2017 ELMS season. The #22 G-Drive crew still lead the championship, but with their second win of the season United Autosports #32 sits just four points behind them. The front runners have pulled away from third-placed #49 High Class Racing, who are 24 points off G-Drive. Having only scored 4 points from this weekend’s round, they are now matched for points from fourth-placed #39 Graff.

Just over an hour was left when the DragonSpeed retired from the race. Henrik Hedman was on board the car when it slowed out on track and came to a stop, pulling out a full course yellow. The car stopped due to running out of fuel, an odd and unusual reason for failure to see in a endurance race. Within the same full course yellow, the #25 Algrave Pro Racing was also retrieved as it had spun off and stopped in the gravel trap at Turn 5.

David Droux could not hold onto the pole position that they started the race with, falling to third as Mikkel Jensen and Sean Rayhall took the #9 AT Racing and #2 United Autosports forwards to fight for the lead of the class.

However, the LMP3 class became a race about who could make it to the chequered flag. An early spin at Turn 1 from Wayne Boyd in the #3 United Autosports due to a drive shaft failure saw the Brit become the first retiree of the race. LMP3 held the highest number of retirements for the 4 Hours of Red Bull Ring. The #6 360 Racing and #19 M Racing – YMR Norma joined the list of retirees before the halfway mark.

With 90 minutes left on the clock, the battle for class lead was between Giorgio Mondini in the #11 Eurointernational and Rayhall in the #2. Just 4 seconds separated the pair as racing entered its final hour. Through the pit stops, the #2 gained the advantage, getting the lead and moving 25 seconds ahead of the #11 Eurointernational. Nevertheless, the drama was far from over as the #2 picked up a drive through penalty for excessive track limits abuse. When John Falb returned to the track after serving the penalty, there was only four minutes left on the clock. With the lead gap now down to 2 seconds, Davide Uboldi was on a mission to get the lead off of Falb.

Falb crossed the line 1.7 seconds ahead of Uboldi but the race did not end with the chequered flag. A post race 25 second penalty was given to the #2 United Autosports team, which dropped them down to second behind the #11 Eurointernational team. The #2 team lead the LMP3 standings, but since they lost 7 points from this round they are tied at the top of the leader board with second-placed #7 Ultimate. Only their win from the 4 Hours of Silverstone puts them on top of the class.

GTE had the most action of the four hours, with a riveting battle for the lead from lights to flag. Aaron Scott took the advantage off the line, taking first from Giorgio Roda in the pole-sitting #51 Spirit of Race. It was a bad start for Roda as he fell to third, the #77 Proton Competition also getting ahead off the line. Jody Fannin took advantage of the top three battle and stayed close to them in the first hour.

By the end of the first quarter of the race, Fannin had the #66 JMW Motorsport car up to second, chasing down the then leader, the #55 Spirit of Race. But second was not enough for JMW. Coming off the high of winning the Am class at the 24 Hours of Le Mans the team were pushing hard for class victory. Rob Smith used his stint in the car to catch and pass the #55, putting the #66 at the front of the class, leading comfortably.

The next hour saw the two cars battling for the lead. With just under 90 minutes on the clock, Scott, back in the #55 Spirit of Race Ferrari, got the advantage and made the pass on Smith to retake the lead. But Smith does not let Scott hold the lead for long. A pit stop and driver change sees Jonny Cocker climb aboard the #66. Before the hour ends, Cocker is ahead of Scott, putting the JMW Ferrari back on top.

The fight between the #66 and #55 raged on throughout the race. Matt Griffin was given an advantage in the #55 as Cocker in the #66 got clipped by one of the LMP3 cars and pushed wide. This incident gave Griffin an 11 second lead at the front of the GTE field, which was enough to see him take the chequered flag comfortably. After an epic fight, Cocker and the #66 JMW car had to settle for second place.

But the battle for third looked like it was going to be decided at the flag. The Championship-leading #90 TF Sport Aston Martin n the hands of Nicki Thiim had pushed throughbthe field and was looking for a podium finished. Some stellar wheel-to-wheel racing from both Thiim and Roda saw Thiim eventually get the better of the Ferrari and make the pass, but Roda made him work for the bottom step. 0.3 seconds split the Ferrari and the Aston as the chequered flag fell.

The impressive performance from Thiim in the final hour of the race sees the #90 still leading the GTE championship. However, JMW are closing in, now only 6 points behind the Aston Martin. With just three races of this season left, anything could happen as the championship battles are closer than ever.

By Alice Holloway
1 Mins read
Richard Mille Racing have announced the continuation of their all female driver line-up along with their step up to the FIA World Endurance Championship.
European Le Mans SeriesFIA WEC

By Alice Holloway
2 Mins read
After serving as CEO of Le Mans Endurance Management for nine year, Gerard Neveu will leave the FIA World Endurance Championship and European Le Mans Series at the end of 2020.