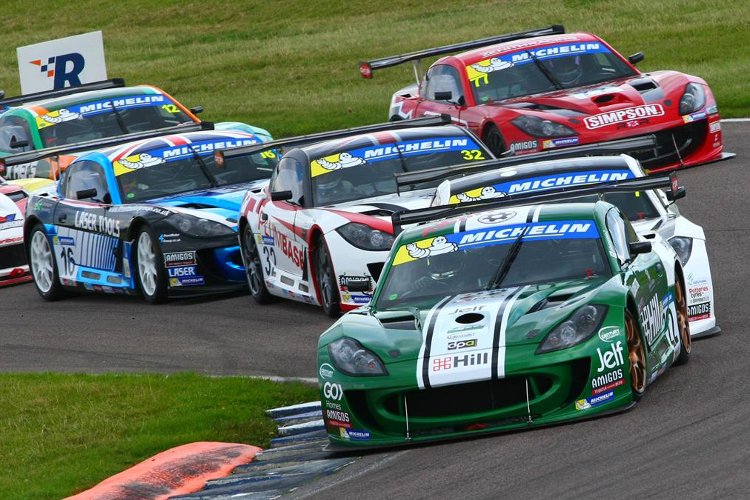 Ben Green secured a double victory in the latest rounds of the Michelin Ginetta GT4 Supercup at Rockingham last weekend, however a difficult third race for him coupled by a podium double for Callum Pointon means the latter could win the title next time out at Silverstone.

Fresh from his maiden championship win at Knockhill three weeks prior, Declan Jones would secure his first ever Supercup pole position in qualifying on Saturday, however his opening race would be short-lived as first lap contact with Seb Perez led to his retirement.

Green inherited the lead and went on to lead the remainder of the race for victory, however his mirrors would be filled in the closing stages by George Gamble, who bounced back from qualifying difficulties to superbly rise from eleventh on the grid to second.

As Pointon completed the podium, Charlie Ladell converted a seasons best qualifying of fifth into a strong fourth place finish ahead of Jack Mitchell and Reece Somerfield, the latter having made his 136th start in the Supercup, a new championship record.

Race two would see a straight fight between title protagonists Green and Pointon at the head of the pack, with the duo swiftly breaking clear of the pack. Pointon pushed hard in the closing stages but couldn’t make a move stick, with Green taking a fifth victory of the campaign.

Mitchell completed the podium after fending off some late pressure from Jones, who had dropped back to eighth on the opening lap but climbed up the order and picked his way through a great four-way battle with Boardley, Gamble and Hibbert, the former having started eleventh.

Jones’ fourth place finish earnt him the reverse grid pole position for race three, with the Rob Boston Racing ace heading the field from start-to-finish for his second win of the year, with Mitchell and Boardley completing the podium after the latter gained some early ground.

A seven car train fought behind, with Gamble passing the title contenders to finish fourth ahead of Pointon, whilst a troubled race for Green saw him drop back to eleventh as the race developed, a result that could have effectively ended his hopes for the title.

Hibbert completed the top six ahead of Rob Boston Racing team-mates Ladell and Jason Baker, the latter completing a hat-trick of eighth place finishes as he made the step up from the AM to Pro class for his second outing in the championship.

In the AM class, a race two retirement for Colin White has made it firmly Jac Constable’s title to lose, with his tenth and eleventh victories of the season ensuring the Xentek Motorsport ace has a 73 point lead atop the standings with two meetings remaining.

As Constable led home Alexis Taylor and Jack Minshaw for a memorable one-two-three class finish, White’s race would come to an end with mechanical problems, an issue then compounded by a disagreement with the recovery team and later a lowly sixth place finish in race three.

It would have been a treble win, however a ten second penalty for an out-of-position start dropped him to third behind maiden winner Minshaw and White, whilst in the live-televised race three he led the way from Ian Robinson and Minshaw.

Dan Kirby had impressed in qualifying with the second fastest time behind Constable, however he endured a nightmare hat-trick of retirements across the meeting, whilst a solid debut weekend for his Team HARD stablemate Toby Bearne netted him a pair of top six finishes.