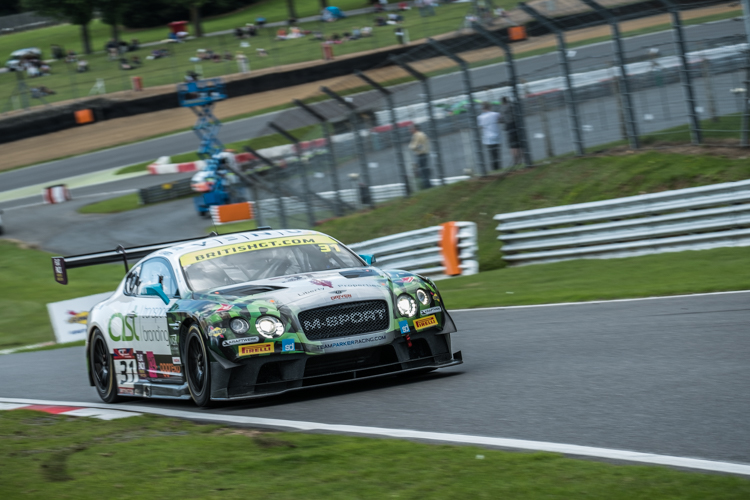 Rick Parfitt Jnr and Seb Morris charged from fifth on the grid to claim their third win of the year in the #31 Team Parker Racing Bentley, battling ahead of rivals Jon Minshaw and Phil Keen in the GT3 title race heading into the season finale at Donington Park.

In GT4, Will Phillips and Jan Jonck earned their maiden British GT victory in the #42 Macmillan AMR Aston Martin Vantage.

The #62 Academy Motorsport Aston Martin of Will Moore relinquished the lead in GT4 after a tussle with the #100 Black Bull Garage 59 McLaren 570S, with Sandy Mitchell powering ahead through Clearways to storm in front.

A duel for fifth in GT3 saw Derek Johnston and Parfitt Jnr bumping wheels through Druids, whilst a fierce battle between the two title rivals in GT4 raged in the opening two laps. Both the #55 HHC Motorsport Ginetta of Stuart Middleton and David Pittard‘s #51 Lanan Racing Ginetta jostled for fourth, whilst also trying to negotiate the non-scoring invitational Toyota GT86.

Lights ablaze, Littlejohn gradually reeled in race leader Minshaw, clambering up to the back of the #33 Lamborghini as the GT3 competitors closed in on their slower GT4 counterparts ahead.

Trying to salvage the #31 Team Parker Racing’s championship chances, a determined Parfitt Jnr brilliantly fought ahead of the second Barwell Lamborghini of Liam Griffin – who had hoped to hamper the Bentley’s progress to assist Minshaw and Keen’s title push.

Facing fervent pressure from Littlejohn behind, Minshaw slipped onto the grass into Graham Hill Bend, allowing an eager Littlejohn to take full advantage and snatch the lead.

As the top two of Mitchell and Moore broke away at the front of GT4, a pulsating battle was developed between a trio of Ginettas for the final podium spot. Pittard, Middleton and Niall Murray‘s #43 Century Motorsport Ginetta swept through Paddock Hill together, Murray taking too much speed into the corner allowed both Pittard and Middleton to sneak ahead as they continued to fight.

An inspired Parfitt Jr demolished Minshaw’s gap in second, sensationally switching underneath the Lamborghini down the Cooper Straight, a pivotal move with significant title implications.

The 29 runners who began the race became 28, Moore’s second-placed Aston Martin spluttering to a stop through Stirlings, bringing a disappointing end to their podium hunt and signalling the first safety car of the race.

The Aston Martin-induced stoppage brought a brief end to a relentless opening 35 minutes. Littlejohn soon re-opened his lead gap after the safety car pulled away, 1.4 seconds ahead of the challenging Parfitt Jnr.

A struggling Minshaw fell into the clutches of the chasing pack, dropping to 4th behind Farmer before facing another challenge from Griffin and Derek Johnston‘s #1 TF Sport Aston Martin.

Soon after losing a spot to Phillips’ #42 Macmillan AMR Aston Martin, a steering failure for Pittard saw the #51 car wheeled into the garage – devastating their GT4 championship hopes and putting the title within sight for HHC Motorsport.

Another cruel twist saw comfortable race leader Littlejohn stutter into the pitlane just before the driver changes, with a furious Littlejohn throwing his gloves off in disgust as the #24 car’s hopes of a maiden win and the GT3 title disintegrated.

Mitchell and Littlejohn were forced to retire from the lead. (Credit: Jakob Ebrey Photography)

Parfitt Jnr inherited the lead and a huge lead as a result, soon swapping with Morris and benefitting from a minimal success penalty as the rest of the field made their obligatory pit-stops.

Minor work in the pits cost Middleton a couple of spots in GT4, falling behind both Jacob Mathiassen and Adam Mackay before emerging in fifth.

As Morris cushioned his unassailable lead ahead of Sam Tordoff, the battle for third intensified between Jon Barnes, Jonny Adam and Keen.

A 20 second penalty for the #43 Century Motorsport Ginetta ended Mathiassen’s podium hopes, as the #100 McLaren and the #42 Aston Martin ran side-by-side for the lead in GT4.

After laps of battling, Jonck muscled his way down the inside at Druids hairpin, forcefully surging ahead of Haggerty with 15 minutes remaining. Haggerty couldn’t regroup and soon lost second to David Osborne‘s #56 Tolman Motorsport McLaren 570S, with worsening tyre grip seeing the Scotsman lose his podium to Middleton through Clearways. Seconds later, Haggerty barreled into the barrier at Paddock Hill Bend, emerging unscathed but ending Garage 59’s hopes of a strong finish.

Morris comfortably cruised to victory, powering Team Parker Racing into a 10.5 points lead heading into the championship-deciding season finale at Donington in September.

Jonck powered his and Phillips’ Aston Martin to its maiden victory, lessening Macmillan AMR’s frustration after Mitchell and Littlejohn’s retirement from the GT3 lead.