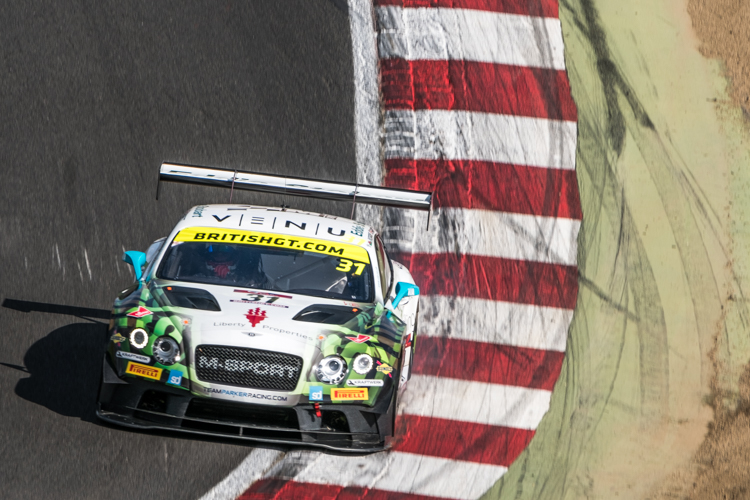 The title-battling Barwell Motorsport Lamborghini made an instant impact to begin first practice, with Jon Minshaw emphatically powering atop the standings ahead of the returning Spirit of Race Ferrari 488 of Duncan Cameron.

After claiming Blancpain title honours at the 24 Hours of Spa, Adam marked his British GT return with an impressive second fastest time in the #1 TF Sport Aston Martin.

Featuring for the first time since the Silverstone 500, the #19 Century Motorsport Ginetta GT3 suffered heavy front-end damage following an impact with the barrier, sparking a lengthy red flag period that interrupted the session’s proceedings.

Immediately after action resumed, Spa winner Callum Macleod maintained his momentum by charging to the front, before being immediately toppled by teammate Parfitt Jnr’s #31 Bentley Continental. Come practice end, Bentley took first blood with a 1-2 in the standings.

In GT4, the championship leading #55 HHC Motorsport teenage duo of Will Tregurtha and Stuart Middleton were surprisingly denied top spot in practice one by Century Motorsport’s Mike Simpson in the #111 Ginetta.

Mike Simpson charged to the top of the standings for Century Motorsport. (Credit: Nick Smith/TheImageTeam.com)

Nothing separated the #88 Team ABBA with Rollcentre Racing Mercedes AMG GT3 of Adam Christodoulou and Phil Keen‘s #33 Lamborghini Huracan to start free practice two, with both pro competitors split by less than one hundredth of a second early on.

The red flag waved once again struck practice however, with light barrier contact for Callum Macleod at Hawthorns leaving the #7 Bentley stricken at the side of the track and in need of recovery.

A heavily delayed second session resumed with 30 minutes remaining, with the #111 and #55 Ginettas swapping quickest lap times in a fight at the front of GT4.

In the waning moments, the reigning champions stormed into contention, with Adam emphatically surging to the front of the field in GT3, 0.258 seconds ahead of Keen’s best effort.

Christodoulou’s Mercedes was pipped to third by Jon Barnes, who completed a sensational recovery for the #11 Aston Martin that had suffered a spin at Paddock Hill Bend only minutes earlier.

HHC’s narrowly clung onto fastest over GT4 title adversaries Lanan Racing, who responded through David Pittard by clambering up to second and within a tenth of their championship rivals.