Rob Austin was delighted to end the 2017 Dunlop MSA British Touring Car Championship season with a victory at Brands Hatch, saying that the team ‘deserved more’ over the course of the year.

Austin assured the team’s maiden BTCC victory with a decisive move inside Mike Epps at Surtees in the final race of the day in Kent, edging away into an untroubled lead to secure the win in the team’s final race with Toyota machinery before switching to Alfa Romeo in 2018.

Ninth place in the opening brace of races, the Evesham driver dedicated his race three victory to his late Grandmother, who sadly passed away last month.

“I made some silly mistakes in race one and two, I wasn’t having it in that one!”, said Austin. “I lost my Gran when we were at Silverstone, she was my biggest fan, and in race three there it [a win] was on the cards. It got taken away from us, so this is for her.

“I knew I needed to pass him [Epps] before we got onto the back straight as his car is quick, so I tried something at Graham Hill I learnt in the Legends race I did last year and it worked well. I knew he’d work as a bit of a blocker to the others, and I needed to take advantage of that, so I did but the Safety Car spoiled my original lead. At the re-start we were OK though.”

Austin’s victory propelled him to fifth in the Independents’ Championship, but he added in hindsight that bad luck prevented Handy Motorsport from adding more silverware in 2017.

“It’s easy when you’ve got the car under you, the team did a fantastic job and gave me a great race car. The job everyone has done this year deserved more silverware than we’ve had, but that’s been down to circumstances and just bad luck.

“Without that we would have hit our target of a top 10 championship finish. What’s that saying, though…you’re only as good as your last race!”

“We’ve had pole position, seconds, thirds and Independents wins – the only bit that was missing was the first overall win and now we’ve done it”, said Belcher. “As far as I was concerned, this was ours to lose basically. I told all the boys to double-check, triple-check, everything on the car to make sure it wouldn’t let Rob down and he put in a fantastic performance in difficult conditions.

“It’s the perfect way to sign off our time with the Toyota as we head into the winter working on our new project with the Alfa. This win proves what a great car we’ve put together, we’ve proved we can produce a car that can win races in the BTCC. Everyone at the team has done an incredible job this year, we have some amazing people – this is such a buzz for everyone.”

“It has been a long project to bring Alfa Romeo back to the BTCC, with many people working on this exciting development for some time – it’s incredible to have brought everything to fruition and an honour to be running the Alfa Romeo marque”, said team principal Belcher at the launch of the team’s partnership with Alfa Romeo, confirmed for 2018. 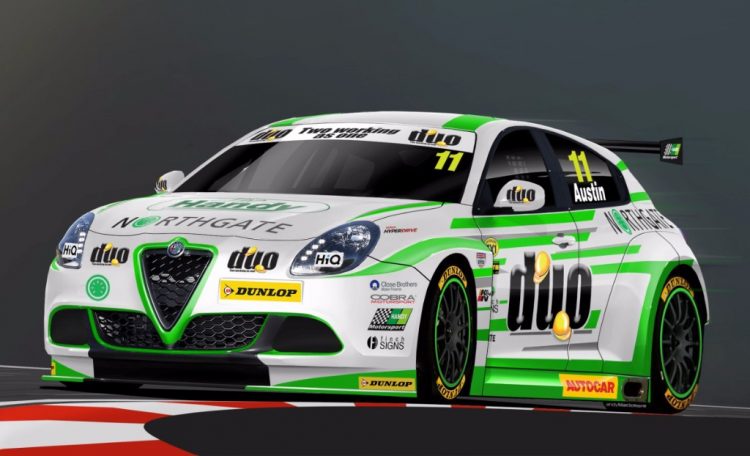 Two years of the Belcher/Austin partnership finally ended on a high note, with victory acting as both a poignant send-off for their Toyota Avensis and a positive omen for their new chapter.

That comes with the brand that clinched the BTCC title back 1994, Alfa Romeo matching the team’s drive to expand the BTCC’s horizons even further.

“Alfa Romeo is a passionate brand, steeped in heritage, and we have already started building our first bodyshell. Not only is this huge for Handy Motorsport, and fantastic for Alfa to have the latest Giulietta represented on the BTCC grid, it’s also massive for the BTCC as a whole”, added Belcher.

“We want to win, we have a great team and that passion runs deep in it. I am looking forward to this being an instrumental part of our team’s future. This is undoubtedly the next logical step for us.”

Austin himself could not hide his anticipation for partnering with the Italian manufacturer, a plan on the radar for the multiple BTCC winner prior to his switch in 2016.

“Driving an Alfa Romeo in the British Touring Car Championship next season? It doesn’t get much more exciting than that does it!”, he said. “I genuinely love the Alfa Romeo brand, I had an Alfa when I was younger and I loved that car. Early on, when Simon [Belcher] and I started talking before I joined the team, working towards this deal was part of the plan.

“Ever since my engineer Matt and I had the Audi, we talked about what we’d love to do working from a blank sheet of paper and that’s what we can do now with the Giulietta. We’ve always wanted this opportunity and we’ve got enough time ahead of next season to do this job properly. The car is well suited to the BTCC regulations, we’re going to build a work of art as much as a racing car!”