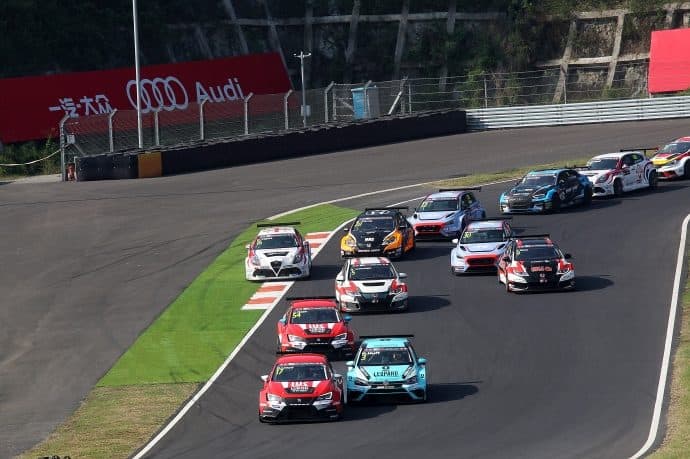 The TCR International Series will return to the track this weekend at the Dubai Autodrome for its final round. Jean-Karl Vernay (Leopard Racing Team WRT) will head into the last 2 races with a comfortable margin of 21-points over M1RA Racing’s Attila Tassi.

The Hungarian previously led by a slender 2-points heading into the Zhejiang round but a difficult weekend meant he could only score 7 points with a best result of ninth in the attrition heavy race 2.

A 12th and 9th at Zhejiang left Tassi with a tough deficit of 21-points to overcome in Dubai. Credit: TCR Series

Whilst Vernay could only manage second on the road in race 1 behind the rapid BRC Racing Hyundai of Gabriele Tarquini, the temporary homologation of the Korean car would see the Frenchman as the official race winner and thus claim a maximum 25 points on top of his 5 qualifying points for pole. With Tassi’s two poor results, an incident-affected twelfth in race 2 would not hinder Vernay as he forged a handsome 21-point advantage.

Stefano Comini (Comtoyou Racing) and Tassi’s team-mate Roberto Colciago will be hoping for a miracle of sorts as they trail Vernay by 42 and 46 points respectively with only 55 points on offer in Dubai.

Hyundai will undoubtedly be one of the main focuses of the weekend. Both Tarquini and his equally experienced team-mate Alain Menu were remarkable on their débuts in the Hyundai i30 N TCR out in Zhejiang. Having started thirteenth and fourteenth respectively in both races (the pair ineligible for the top twelve grid spots), they would have scored 45 points had they been fully-homologated. Tarquini was also the theoretical champion of the TCR Europe Trophy at the end of October in Adria when he scored an ‘invisible’ win and second place across the series’ 2-race championship, proving the early potential of Hyundai’s first circuit race car. 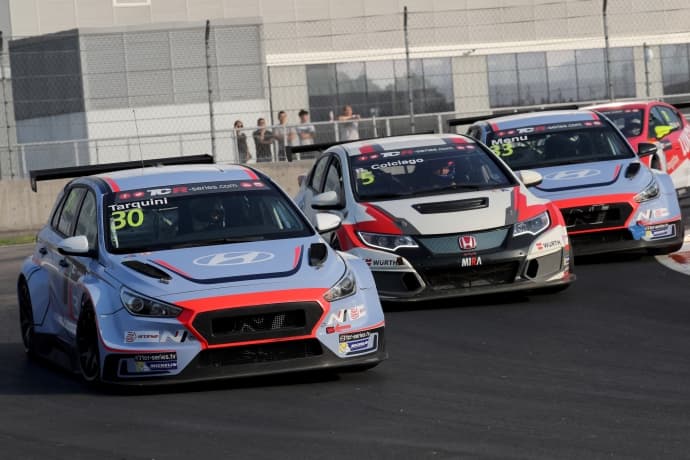 Tarquini will be looking to reinforce his win on the Hyundai’s debut at Zhejiang as the car prepares for sale. Credit: TCR Series

Rob Huff was due to carry the maximum ballast of 30kg as the top points scorer in Zhejiang however he will instead contest the clashing WTCC Guia Race in Macau, a race he has claimed significant success in including a win in the first appearance for TCR in the 2015 Guia Race.

Huff briefly hinted at his replacement during an interview in China, suggesting he would be a “surprise” with a few championships under his belt and it was indeed a surprise when three-times BTCC champion Gordon Shedden was announced in lieu of Huff. Shedden will make his official TCR-début, although he has previously sampled TCR equipment.

“I’m excited to join Leopard Racing and WRT where I will use all my experience to help Jean-Karl secure the Championship,” said Shedden. “The TCR International Series looks really competitive but I am looking forward to the challenge!”

Also guest-starring this weekend will be Denis Dupont in a Comtoyou-run Seat Leon TCR, returning to the International Series with a win under his belt in the Benelux series since his disappointing 100-meter International series début in Zhejiang. His Benelux rival and recently crowned TCR Europe Trophy champion Aurélien Comte will swap his DG Sport Competition Peugeot 308 car for the teams’ second Opel Astra, vacant since a one-off appearance by Munkong Sathienthirakul at Buriram.

The man expected to have won the European trophy, Josh Files, will also compete this weekend in a third M1RA-run Honda Civic as the team owned by Norbert Michelisz look for as much support as they can find to get Tassi to the drivers’ title. Files will also prove important for the teams’ championship with M1RA looking to seal off the title with a 69-points lead over nearest rivals Lukoil-Craft Bamboo Racing, WRT a further 11-points behind in third.

“This will be my third straight year contesting the final round of the TCR International Series. I’m thrilled to be doing it and am aiming to challenge for victories and to help M1RA and Honda achieve their title ambitions, despite the circuit being new to me,” said the twice-German TCR champion. “M1RA have done a superb job in their first year, have an incredible record for such a young team and always field fast and well-presented cars. I can’t wait to get going.”

Benjamin Leuchter is the final guest-entry for the weekend as the highly-experienced VLN endurance driver, where he has taken 5 class-wins in the Nurburgring Nordschleife based championship, gets set to take the wheel of the second West Coast, where he looks to support Volkswagen in their fight against Honda for ‘Model of the Year’ 30 points arrears of the Japanese.

The weekend will consist of a shorter 2-day race weekend held across Friday and Saturday with two separate hour long Free Practice sessions in the morning of Friday followed by the usual two-stage Qualifying session at 15:30 local time (GMT+4). The two 60km sprint races will proceed on the Saturday at 11:05 and 15:30. All sessions will be available live online via the official TCR Series YouTube channel.

By Samuel Gill
1 Mins read
TCR Australia star Aaron Cameron is set to join up with Halfords Yuasa Racing for a test at Silverstone this week for his first taste of BTCC action.
TCR EuropeTCR International SeriesTouring Cars

By Phil Kinch
11 Mins read
During 2019, The Checkered Flag is rounding up the news and results from the various TCR Series around the world on a weekly basis.