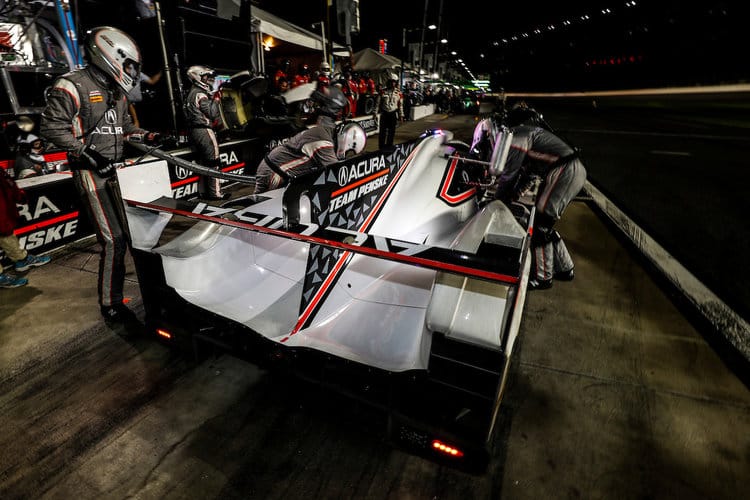 A third full course yellow slowed the field down at the 2018 Rolex 24 at Daytona, but unseen contact to the #7 Team Acura Penske proved to be the big story of the hour as they came back into the garage for repairs. Meanwhile the #5 Cadillac DPi continued to lead at the hands of Joao Barbosa.

The hour started with only the third Full Course Yellow of the race as Jorg Bergmeister ran wide through the Bus stop chicane, resulting in the Park Place Motorsports car spinning and touching the inside wall.  He got the car back up to speed and did not take the opportunity to pit instead continuing, albeit now in twelfth overall.

With the field now slowed down, the leading Ford GT‘s in GTLM and the GTD leader; #48 Paul Miller Racing took the opportunity to take new tyres and fix its quickly deteriating brakes, allowing Franck Perera in the #11 GRT Grasser Racing to inherit the position. The #48 would return to the track in third.

Despite the caution being caused for a small off from the Porsche 911 GT3, the caution lasted for fifteen minutes ensuring that it was a cautious restart as drivers got back up to speed. In GTLM, the Ford’s had swapped positions due to the pitstops again, with the #67 narrowly in front.

Back at the head of the field, the #5 lead the pack, but issues during the previous stint meant the leader caught up and lapped the #31 Mustang Sampling Racing driven by Felipe Nasr.

Elsewhere, the #38 Performance Tech Motorsports car was into the pits for a stop/go penalty.

The big news as the hour ended though was the drop off of the #7 Acura DPi. Contact with another car saw Helio Castroneves pit the Penske machine dropping a number of laps on the leaders allowing the Cadillac’s to control the race outright.

As a result, this promoted the #32 United Autosports to third, albeit still three laps down. The hour ended with another pitstop for the leading Cadillac.