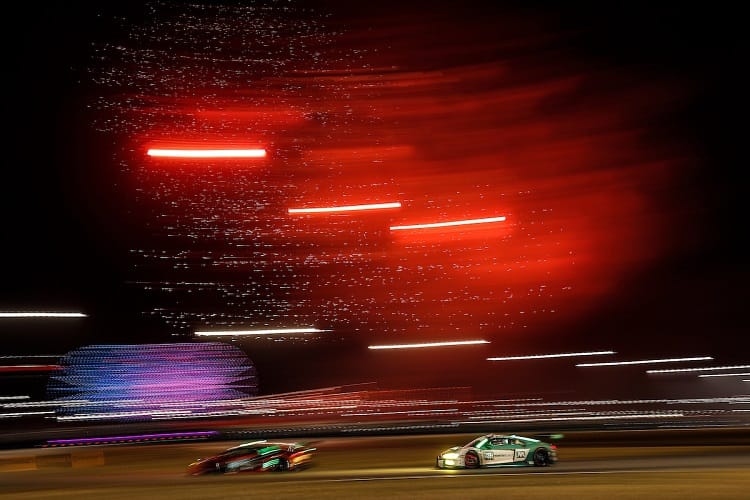 The Mustang Sampling Racing #5 continues to lead after a drama free hour for Christian Fittipaldi and Joao Barbosa in the Rolex 24 Hours at Daytona.

Barbosa has a three lap advantage over Felipe Nasr, who took over the #31 Whelen Engineering Racing car with four hours to go.

Neither car’s overheating problems appeared to caused trouble in the hour, allowing them to maintain the gap to Romain Dumas in the #34 CORE autosport car.

Clutch problems for the #32 United Autosport car persisted but Paul di Resta managed to get in and out of the pits without too much trouble, though the mechanics did have to give him a helping hand leaving the pit box.

He spent the hour close behind Ho Pin Tung in the #78 Jackie Chan DCR JOTA machine, with the pair running roughly 40 seconds apart in fourth and fifth heading into hour 21.

Phil Hanson jumped into the sister United Autosport car, which continues to run in 19th after problems earlier in the race. It seemed to be a trouble free hour for the squad, but Hanson is still a lap behind the Jackie Chan car ahead.

The JDC-Miller Motorsports #99 and #85 cars are currently running sixth and seventh, ahead of the Performance Tech Motorsport #38.

The Acura Team Penske duo round out the top 10, with Ricky Taylor in the #7 ahead of Dane Cameron in the #6.

The Ford Chip Ginassi Racing #66, with Sebastien Bourdais currently behind the wheel, continues to lead the GTLM class and runs P11 overall.