The BRDC British F3 Championship kicks off this weekend with Oulton Park once again playing host to the opening round endeavours this easter.

While some concerns were raised during the winter over driver numbers, most problems appear to have been solved with nineteen scheduled to appear in the opening round. With the that being one more than last years event it’s clear that F3 has lost none of its appeal.

Coming into the year, all eyes have been on the Carlin team. For the defending champions, the news hasn’t been without controversy, with the outfit now running four cars throughout most of the season.

Following his accident last year, Billy Monger has been steadily working his way back into racing, building up his hand controls and gaining simulator experience with the team during the winter. When Monger began talking about contracts though, they were left with a dilemma, with three drivers already in the pipeline for the seat.

As of Thursday, the full situation has officially been revealed with Clement Novalak confirming he’ll run a part-campaign between his Eurocup Formula Renault commitments. Both Nicolai Kjaergaard and Sun Yue Yang will race the full season.

Testing pace from Thursday suggests Kjaergaard is not only the strongest driver in the team but a genuine championship contender. He’s remained in the top five throughout pre-season testing and after two mediocre seasons will be looking to finally establish himself. Monger meanwhile is likely to be in contention for wins, but has not shown the pace required to challenge for the championship. 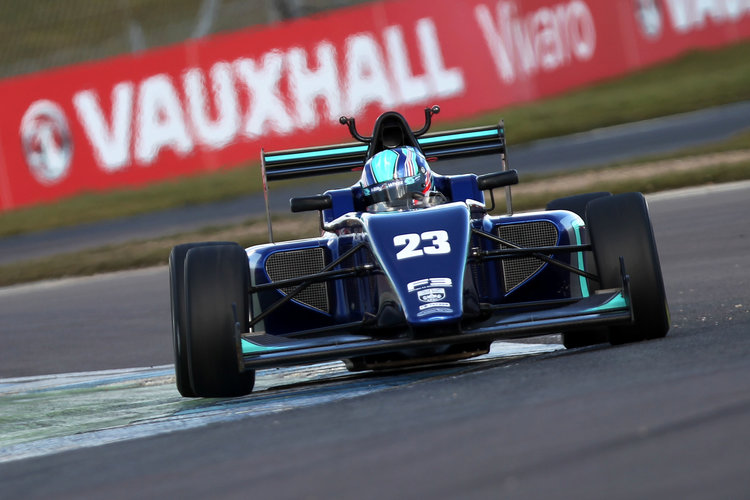 Billy Monger makes his return to single-seater racing this weekend.

Despite being the only team to run four cars, they’re not necessarily going to have it all their own way in the teams battle, with Fortec Motorsports running one of the strongest all-around squads.

Manuel Maldonado returns to the team and while his pace has been sporadic during testing, the year of experience he’s built up will be enough to raise our expectations of the Venezuelan.

He’ll be joined by Tristan Charpentier and Tom Gamble. Charpentier is no stranger to the Tatuus-Cosworth car and was one of the stars of testing at Spa-Francorchamps, while Gamble comes into the year as the Ginetta Junior champion, immediately running on pace with his more experienced counterparts at Donington Park.

Joining them in the battle up front will be Linus Lundqvist and Indian driver Kush Maini. The Swede came into the year as the championship favourite, the man to beat, and while his testing pace has hardly been slacking, he has yet to dominate over one lap as much as many were accustomed to from his British F4 exploits.

Lundqvist’s efforts cannot be played down, though the speed of Maini has been one of the standout performances from testing. He dominated the Media Day and has remained a regular in the top five after a year as arguably the strongest midfield driver in Italian F4. He’ll be joined at Lanan Racing by Joshua Mason.

Linus Lundqvist is expected to be a championship favourite this year, but hasn’t shown the testing pace many expect from him.

Double R Racing’s line-up will be completed by Krishnaraaj Mahadik and Pavan Ravishakar. Like Kjaergaard, the former has yet to really prove himself in single-seaters, but a surprise F3 win last year could set him up to challenge teammate Lundqvist towards the front.

Doulgas Motorsport meanwhile have largely put their faith in a female line-up. After her exploits with Double R, former-British GT4 Champion Jamie Chadwick moves across to the outfit as she looks to challenge for the title.

Chadwick has been committed to the two-year plan since she entered the series and after a year of learning the car will be hoping to collect a number of race wins. As for teammate Alexandra Mohnhaupt she misses the first round due to injury with Jordan Cane stepping in and immediately putting the front-runners under pressure. The team is completed by Arvin Esmaeili who joins the fray as an Asian Formula Renault race winner.

Quickly making a name for themselves as British F3’s perennial backmarkers are Chris Dittmann Racing and Hillspeed. CDR enjoyed great success back when the series was called F4, but has struggled to adapt to the new car. They’ll run Harry Webb, who could be a surprise come the end of the season alongside Malaysian Chia Wing Hoong.

As for Hillspeed, they’ve also taken on two rookies. Ben Hurst comes into the year as the reigning Toyo Tyres Formula Ford 1600 Champion.. While Josef Owega moves up after a third place in the CIK-FIA European Karting championship. Both drivers have pedigree, but have yet to settle into the new car. Elsewhere Sasakorn Chaimongkol has also been testing with the team.

Ben Hurst (#3) and Kush Maini (#2) will both be unfamiliar with British circuits, though while the Hillspeed driver looks to find his feet, Maini will be gunning for the title.

Drivers are by no means the only change though, with new rules introduced to spice up the racing. With race two often being lauded as the event that provides no wheel-to-wheel action, the MSV will look to change that, offering additional points based on positions gained.

This has had mixed responses, with the true consequence of the result potentially not visible until the end of the season when the championship fight closes up.

They’ve also brought in an extra round at Silverstone. Gone are the quiet trips to Snetterton prior to the Donington Decider, instead a second round at the jewel of the British calendar where overtaking has proven to be easier could create a more intense season finale.

While the future of the “British F3” name is still under some contention due to conflicts with the FIA’s Regional F3 plan, 2018 could yet provide another future star for the world of motorsport.

Tom Gamble passed up an opportunity in British F4 to race BRDC F3 and so far has proven to be one of the fastest on track with Fortec Motorsports hosted arguably the strongest line-up.

By Michael Callander
3 Mins read
Christian Mansell has started and finished every race so far in the GB3 Championship, and still has an outside chance of taking the title.
British F3

By Michael Callander
2 Mins read
Ayrton Simmons went into the 2021 GB3 Championship season as a title favourite, and sits second in the table heading into the final round.
British F3Formula 3

By Michael Callander
1 Mins read
Nine-time GB3 race-winner, and 2021 title-challenger, Ayrton Simmons will make his FIA F3 debut in Sochi this weekend, after being drafted in by Charouz Racing System.