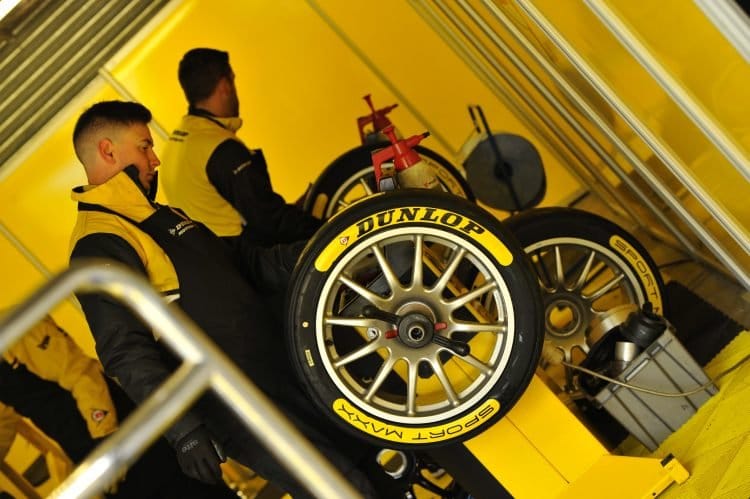 British Touring Car Championship teams might not have as luxurious a range of tyres as their Formula 1 counterparts, but tyre strategy can be just as crucial in the BTCC as the pinnacle of motorsport, making Dunlop’s job as sole tyre supplier all the more important to the BTCC’s formula.

Dunlop has been the BTCC’s sole tyre supplier since 2003. This year, the manufacturer has designed four different compounds for teams to use throughout the season: the prime tyre, soft option tyre, hard option tyre, and the wet tyre.

For many, tyres only come into focus when something goes wrong, but designers have a tough job to create a compound that will work on a range of cars at a range of circuits.

14 materials are used in the carcass alone, and each one plays an important part in the function of the tyre.

The materials that make up Dunlop’s tyres are made of a range of artificial polymers. Each polymer has different characteristics which will decide the properties of the tyre: how long they’ll last, the temperature range they’ll be best at, and everything else engineers take into account.

Also mixed into a material are “fillers”. These reinforce the polymers and help to improve performance and consistency.

It’s difficult to find the right balance of chemicals for a compound. These tyres have to work at a range of circuits, from Brands Hatch to Rockingham, and on front and rear-wheel drive cars.

This range of working conditions means that BTCC tyres are usually more simplistic than those Dunlop supply to the World Endurance Championship.

In the WEC, Dunlop can tailor their tyres to the specific needs of its customers. But to design the perfect tyre for one BTCC team would put half the field at a significant disadvantage, so a compromise has to be made to give all the manufacturers a similar performance.

Designing the compounds for the BTCC’s 60th anniversary season came with an added challenge.

The 60 mile race at Snetterton will not run on a special tyre, and designers had to take that into account when creating this year’s tyre range.

A lot of work goes into designing tyres before they are produced – by hand – and shipped to the UK.

They may not get all that much attention – it’s rare they’re mentioned other than to say when drivers have chosen the option tyre – but the intricate science that goes into making a compound plays a crucial role in making the BTCC one of the most unpredictable and exciting series currently running.

By Jasmine Butler
4 Mins read
With the Formula 1 season opener in Bahrain behind us, we look ahead to the next Grand Prix at Imola.
FeaturesFormula Regional European Championship

By Paul Hensby
9 Mins read
The Checkered Flag looks ahead to the 2021 Formula Regional European Championship by Alpine season.
FeaturesIndyCar

By Griffin Schmoyer
9 Mins read
With the 2021 NTT IndyCar Series about to begin, here’s everything you need to know ahead of a highly anticipated season.