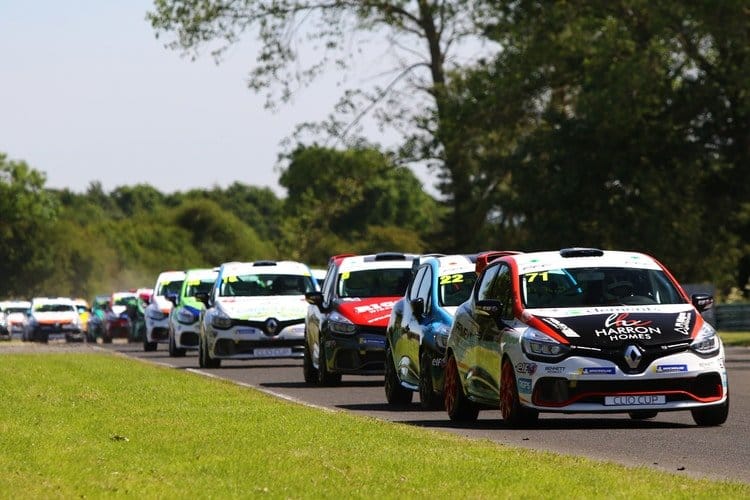 An emotional Max Coates drove to victory in the second Renault UK Clio Cup race at Croft resisting attack from title rival Paul Rivett for the duration of the twelve lap battle.

The win obviously meant a lot to the local driver as the raw emotion of winning in front of his home crowd meant that tears of joy were flowing for both driver and Team Pyro.

Leading from pole position, Max managed to make his way through Clervaux and Hawthorn without incident and never looked back. WDE Motorsport man Rivett didn’t get the luck he got in the first Clio Cup race on Saturday but still managed to keep the eventual winner honest for most of the race.

Whilst two of the three title protagonists enjoyed double podium visits, James Dorlin had a weekend to forget as he had to retire on the opening lap due to a puncture.

Third in the second race went to Lee Pattison who also got the bonus points for setting fastest lap. Daniel Rowbottom finished fourth, Dan Zelos fifth after starting the race in third and Michael Epps of Matrix Motorsport scored his second top six finish of the weekend with sixth.

The battle for ninth position got tasty as Jade Edwards and Jack McCarthy made contact squabbling for position. Damage on the MRM Racing Clio of Edwards meant she had to contend with handling issues for the remainder of the race. Only dropping two places to finish eleventh was a great effort despite a damaged car.

Speaking to RenaultSport following the race. Coates said, “Ten races down, eight to go – it’s great to be in front but the most important thing will to still be ahead after round 18.

“The tears are genuine – the support I get here is incredible and to do it for all the people who get behind me is pretty emotional.

“Paul was always there in my mirrors but I knew I had good pace so it was just a case of keeping it tidy and looking after the tyres in this heat. It’s the best way possible to go into the mid-season break.”

Heading into the five week break, Max Coates leads the drivers championship by just six points ahead of Paul Rivett. Leader going into Croft James Dorlin now lies thirty-one points behind Coates on account of his bitterly disappointing race two. Daniel Rowbottom is fourth ahead of Mike Epps in fifth and Jack McCarthy in sixth.