French chassis manufacturer ORECA has dominated LMP2 since sweeping rule changes were introduced in 2017, with some 15 wins out of 19 races.

Because of this perceived imbalance, the ACO and the FIA have given their rivals, Ligier and Dallara special dispensation to improve their aero kits this year. Add to this the reduced tyre wear attributed to the Ligier, and we could well see a team using one of the Onroak Automotive chassis’ take the class win this weekend.

All of the cars in this class run the same one-make 4.2 litre Gibson V8 engine, which produces around 600bhp.

The LMP2 class is a Pro-Am category for privateer teams, with each crew being made up of at least one Bronze or Silver-rated (semi-pro/amateur) driver.

There is some real depth in the LMP2 field this year, with no fewer than seven ex-F1 drivers taking part. Look out for strong performances by the #26 G-Drive outfit, the #28 TDS Racing ORECA and the Signatech Alpine Matmut squads, all of whom could find themselves spraying the champagne on Sunday afternoon.

United Autosports returns to Le Mans with a pair of Ligiers for 2018, and a special aero update for this year should make the JSP217 more competitive.

DTM regular and Le Mans 24 Hour rookie, Paul Di Resta seems to be enjoying his move into sportscars, which he is running alongside his Mercedes DTM duties. The Scot, who spent three years racing in the F1 paddock with Force India, has been looking carefully at his options for his career post DTM. Di Resta will be one to watch this weekend; even though he is a Le Mans rookie, he has already had seat time in the Ligier while racing earlier this year at Daytona and Sebring.

United ELMS regular Filipe Albuquerque has been working closely with Dunlop to develop tyre compounds that will further improve the car for Le Mans. Improved tyre life and greater aerodynamic efficiency is a delicate balancing act for the Ligier, and if they’ve got it right, the cars could easily be podium contenders. 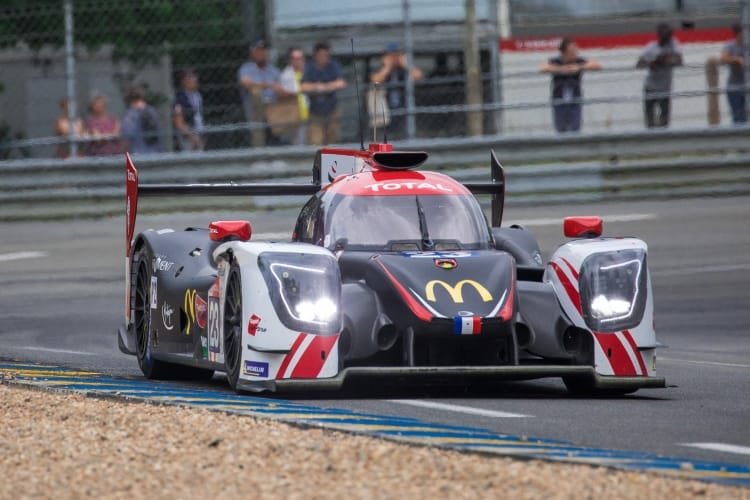 The team created by ex-F1 driver Olivier Panis and soccer star Fabien Barthez and run by the Tech-1 Racing squad, have put together a good line-up for its third outing at Le Mans.

Another former F1 driver and WEC race winner Will Stevens team up with the silver-rated driver, Julien Canal, and ELMS regular Timothé Buret.

The team could be in with a good chance of a podium if they can find the perfect setup for the Ligier.

The Anglo-Portuguese team will be returning to Le Mans for the third time this year.

The driver line-up will see three amateurs take to the wheel of the single entry Ligier. South African Mark Patterson will be making his sixth appearance at the 24 Hours alongside a pair of drivers that raced for the team in the Asian Le Mans Series last year. Despite a strong engineering team in the garage this year, the lack of a pro driver might handicap the team.

The 2015 WEC class champions have entered two cars this year, as the Russian team once again aims for its first win at La Sarthe. Following their impressive outing in the WEC race at Spa earlier this year, the squad features ex-F1 driver Vergne, Rusinov and Pizzitola, who are all aiming to step onto the podium.

With support from the French TDS team, G-Drive should be right up there throughout the race.

The previous ELMS champions and 2014 Le Mans LMP2 runner-up have entered a solo ORECA in the WEC and Le Mans in 2018.

Despite finishing the official test day fourth quickest, the TDS squad have shown excellent pace over longer stints, so if the car remains reliable and the drivers avoid any off-track excursions, the team could be able to snatch a podium on Sunday.

This year the all-Dutch squad have returned to compete in the WEC with their Michelin-shod Dallara. 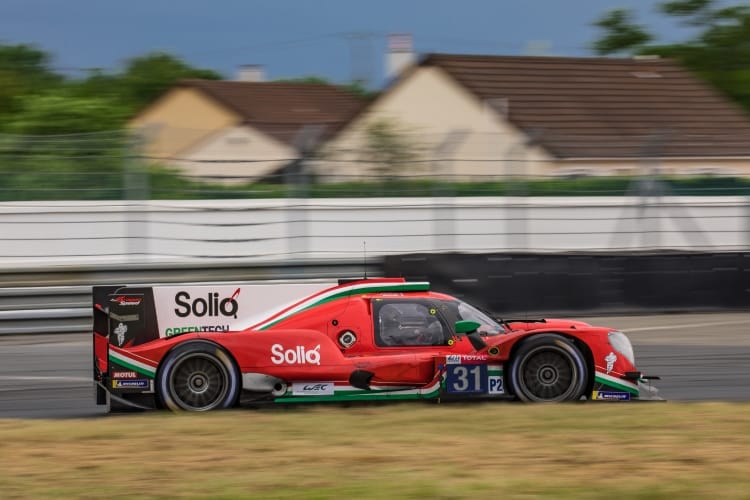 Reigning ELMS champions (racing as G-Drive Racing) are racing in the P2 class of the WEC with their ORECA alongside its LMP1 programme.

Pastor Maldonado returns to racing after a two year sabbatical following his F1 career. After being approached by the DragonSpeed boss Elton Julian, Maldonado signed up for a full WEC super season in the LMP2 class.

The squad, which includes ex-CART ace Gonzales and P2 regular Berthon, topped the LMP2 timing sheets at the official test (despite Maldonado going off in the closing stages) and are now hoping to carry that form over into the race.

Penske IMSA driver and ex-F1 ace Montoya, a triple Daytona 24 Hour winner, makes his Le Mans debut in the second of the United Autosport Ligiers. The Columbian could also be in the offing for the triple crown, having won the Indy 500 and in Monaco.

The 2017 ELMS “Rookie of the Year“, Hugo De Sadeleer, brings a youthful element to the squad. Despite being just 20 years old, De Sadeleer has distinguished himself with brilliant victories, numerous podiums and an incredible fourth place in the 2017 24 Hours of Le Mans.

Colorado native Owen rounded out 2017 with his best season of racing after finishing second in the LMP2 ELMS Championship. Owen also finished fifth overall and fourth in the LMP2 class of the 2017 24 Hours of Le Mans in what was his first ever appearance in the prestigious race. This year Owen brings the experience to back up his driving talent.

If the United Autosports teams can get the Ligier dialled in with the uprated Dunlop tyres and aero package, they will be among the main protagonists throughout the race. 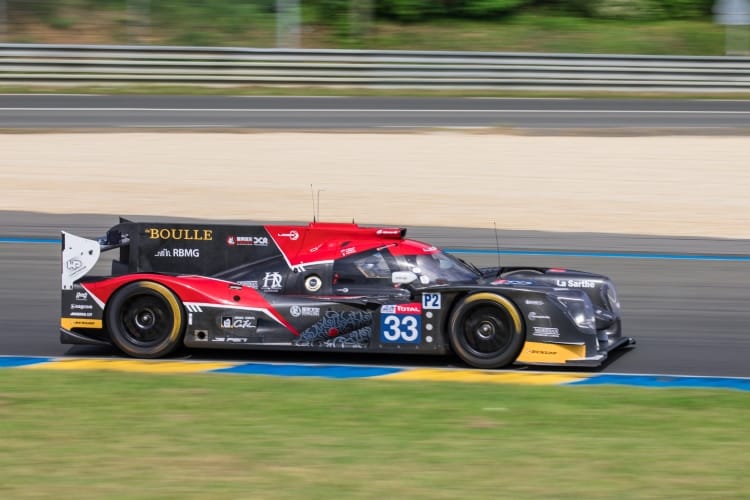 The Jackie Chan-DC squads are being run OAK Racing (part of the Onroak group) this year. The #33 car has been entered for team co-owner David Cheng and Pierre Nicolet (the son of Onroak boss Jacques) and is supported by Boulle.

The #33 car was some ten seconds off the quickest LMP2 times during the official test.

Penske IMSA driver Ricky Taylor, factory McLaren GT driver Ledogar and leading silver-graded driver Heinemeier Hanson are one of the best line-ups in the P2 class this year, but even they will need to run a faultless race if they are to get anywhere near the podium by the finish on Sunday.

Like the #33 Ligier, the test times were almost ten seconds down on the best in class.

SMP is running a Dallara P217 in its ELMS LMP2 campaign for 2018, in which it was a race winner last year.

Regular driver, the Russian Viktor Shaitar, will lead the squad, while Le Mans rookies Newey (son of Adrian) and F2 ace Nato come into the line-up from their ELMS seasons with the Algarve Pro and Racing Engineering teams.

Signatech, winners of the 2016 WEC P2 championship, have put together a squad built around a single Alpine-branded ORECA.

Lapierre returns to Signatech for Le Mans, and is joined by former GP2 driver Negrao (a former Alpine team-mate) and the fast amateur driver Pierre Thiriet, twice a class runner-up at Le Mans.

Some impressive lap times during the official test and the depth of the driving talent behind the wheel indicates that the #36 car could be a potential winner this weekend.

The all-Malaysian driver line-up of the #37 car is led the highly experienced Jaafar, while Jeffri and Tan move to the full WEC programme for 2018 from the Asian Le Mans Series.

The Jota-run squad that almost took the overall victory last year on the way to a one-two in LMP2 has recruited GP3 racer Aubry and 2016 WEC P2 champion Richelmi to join team regular Tung.

As with the #37 car, this is a well-rounded crew with the potential to score a class win.

Ex-Champ car driver Gommendy and the very experienced Hirschi team up with Capillaire for the 2018 edition of the 24 Hours of Le Mans.

This is the second of the G-Drive P2’s at Le Mans this year; this squad is fielded by the experienced Graff Racing team, so provided the young crew can maintain a good race pace throughout the 24 hours, they should be at the sharp end and able to mix it up among the front-runners.

Last year Allen became the yougest Australian ever to make a start at Le Mans, and had a succesful ELMS season. He will now bring that experience to bear for his second attempt at the 24 Hours.

22-year-old Frenchman Enzo Guibbert had a fantastic ELMS season with Graff Racing in 2017, which has earned him a seat alongside Mexican IMSA racer Jose Gutierrez, who was part of G-Drive’s Le Mans line-up last year. 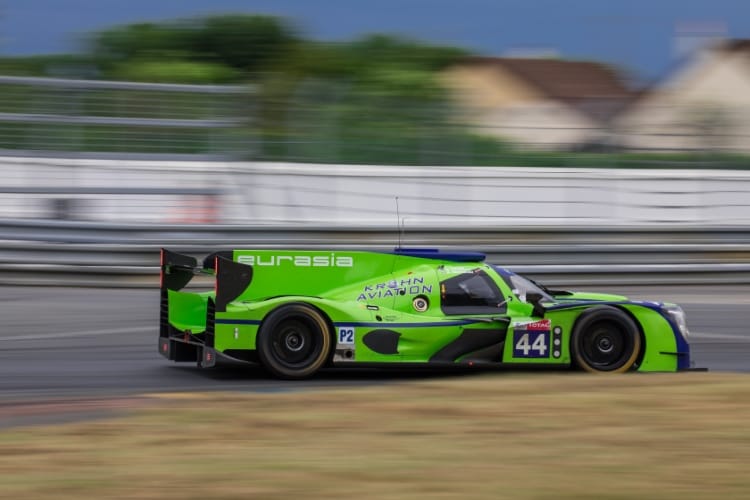 Tracy Krohn, Andrea Bertolini and Nic Jönsson will be at the 24 Hours of Le Mans behind the wheel of a Ligier JS P217 under the Eurasia Motorsport banner. It will mark the longtime pairing’s 13th consecutive Le Mans appearance.

Krohn and Jönsson competed in the 2016 ELMS season in a Ligier JS P2, so there is some consistency within the squad. Andrea Bertolini is a regular Ferrari GT driver and will be making his P2 debut this year.

Ex-Formula 1 driver Felipe Nasr will make his 24 Hours of Le Mans debut this year with the Villorba Corse LMP2 squad.

Nasr will be behind the wheel of the Italian outfit’s Dallara P217 Gibson alongside team regulars, Italians Roberto Lacorte and Giorgio Sernagiotto.

It has been four years since the Larbre squad’s last LMP2 outing at La Sarthe.

The all-gentleman squad, which now includes Dagoneau, who tested with the French team at the Prologue in April, will join Erwin Creed and Romano Ricci behind the wheel of the Michelin-shod LMP2 entry in the French endurance classic.

The Checkered Flag will be reporting all week from Le Mans including around the clock coverage of the race, we hope you join us on our journey through what looks set to be another highly competitive edition of the 24 Hours of Le Mans.