The rain that had threatened to fall on the Circuit de la Sarthe finally broke out of the overcast clouds, causing the last qualifying session to be hampered by a wet track. Due to this, the majority of the 24 Hours of Le Mans grid order remains the same as it was set at the start of the first qualifying session on Wednesday.

However, the last track session before the race begins did provide lap time improvements, seeing all of the class pole sitters, apart from the LM GTE Pro class, improve on their previous lap times. Before the rain began to fall, all of the teams had come out of the pits looking like they had a point to prove, so it was a shame the rain did fall as the grid could have really been mixed up.

Due to the early finish of the second qualifying session, the last session was extended by half an hour so that the teams did not lose any track time. 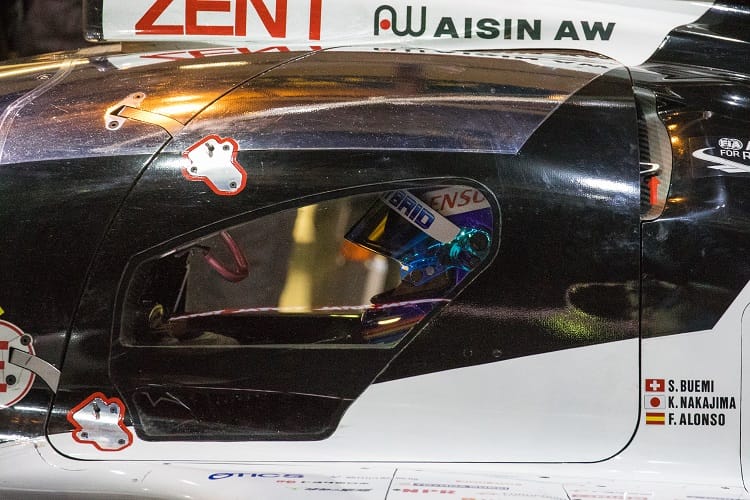 After holding onto the fastest lap time overall, Kazuki Nakajima climbed back on board the #8 Toyota Gazoo Racing to try and chase down his fellow countryman’s lap record from last year. Going a clean two seconds fastest than the sister car, Nakajima locked in a 3:15.377 to claim overall and class pole position.

“Track condition was good, much better than yesterday. Yesterday I didn’t really feel as good grip as today so the lap time was not really as good as expected.” Nakajima said, discussing his pole position lap time. “I am happy with [today’s lap time].

“More importantly I have a really good balance for the race. I’m quite happy with what we have done so far this week and I feel ready for the race.

“We think qualifying is only one percent of the whole race weekend. We feel great and it’s good for the team [to get pole] but we all know the race is very long and is going to be a tough race.

“We keep our heads down and try the maximum for the race.”

Loic Duval has looked to be the man on the move, setting a lap time of 3:24.816 to secure class pole. However, the #28 TDS Racing was among a handful of cars to lose their fastest lap time and receive a  fine for not going to technical inspection when called. Due to this, the provisional pole sitter in every other qualifying session, Paul-Loup Chatin in the #48 Idec Sport, inherited class pole. The fact that the TDS proved it can go faster than the pole sitter could become an interesting factor in the race.

“Congratulations to Loic Duval, he did a really great lap time. He was three tenths in front of me. For sure, on the track he deserved the pole positions.” Chatin said after qualifying.

“I got the pole position yesterday night and I improve my lap time tonight from one tenth. It was really close to Loic we were in three tenth.

“For sure a little bit of frustration… But I think that our team deserve the pole position. I’m just really happy, the team Idec Sport did a really good job the car is just fantastic on this track and is the same for us the Michelin tryes.

“They work a lot over the winter on this tyre and I’m just really happy to give them this pole position.”

As predicted last night, Gianmaria Bruni‘s first flying lap from Wednesday remained as the pole position time as the chequered flag fell tonight. The amazing 3:47.504 was unrivalled by any other car, with only the sister Porsche GT Team car getting anywhere close. It was still a 1.5 second advantage for Bruni when the provisional grid was locked in.

Talking about that incredible lap time, Bruni said: “I think yesterday was a very good lap. I was able to pull it all together. I had a bit of a slipstream from a Ferrari Pro so we make a really good lap.

“The biggest thing was sector three. The car was really well balanced. Approaching lap 2 I tried to go faster but it didn’t work so I spun into the gravel.

“Good feeling. Good start position. Really proud to be able to work with such a nice and big family and looking forwards.”

Porsche Lock Out Am Top Three

Porsche retained their dominance in Pro and Am with a one-two-three in Am at the end of qualifying. Matteo Cairoli kept the #88 Dempsey-Proton Racing on top of the class with a 3:50.728, which also places them ahead of four of the Pro cars when the grid forms on Saturday. The Italian managed to make an improvement on the car’s lap time in the final qualifying session, even though he nearly lost the car and spun at Mulsanne with the track getting wetter as the session unfolded.

“Le Mans is something special and to be on pole is really amazing.” Cairoli said on reflection of the final result. “I’m really proud of the team; they did an amazing job so far.

“We are really confident for the race on Saturday. I just cannot wait to start the race and let’s hope for the best.”

With the grid now set, the 2018 24 Hours of Le Mans draws ever closer. Lights out for the 86th running of the World’s most anticipated endurance race come at 14:00 BST on Saturday, and it’s a race you are not going to want to miss.