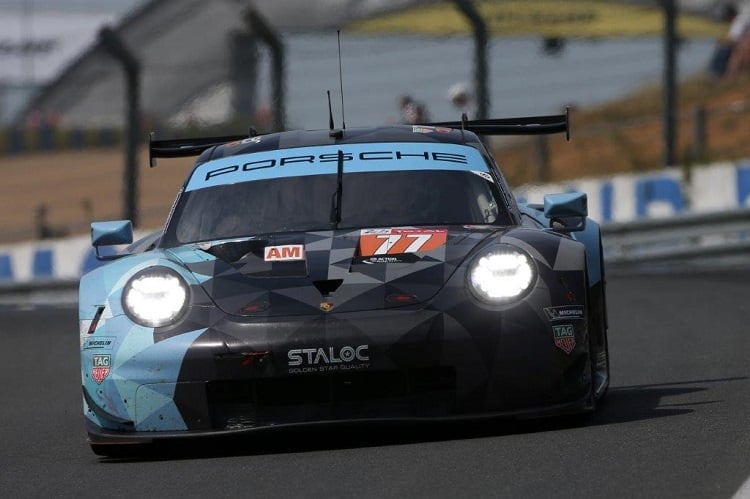 Am looked to be in Porsche’s pocket, with three Porsche running teams spending most of the 24 Hours of Le Mans at the front of the class. It was a Porsche on the top step, but the Ferrari-running teams made sure it wasn’t too much dominance, with the top four ending Porsche-Ferrari-Ferrari-Porsche.

The #77 Dempsey-Proton stole class honours after misfortune befell the sister car with a suspension failure and it slipped down the order, unable to finish the race. There was no dash to the finish for the win as we have seen is past years, but a feat and spectacle of endurance racing at its pinnacle nonetheless.

Thomas Flohr, Francesco Castellacci and Giancarlo Fisichella put a lot of pressure on the leading Porsche in the latter half of the race, trying to make up some distance to create a fight for the win. They couldn’t get close enough in the Spirit of Race Ferrari before the chequered flag, so had to settle for second. The Keating Motorsports Ferrari followed suit of the sister car, managing to get past the Proton Competition Porsche to put two Ferraris on the class podium.

Reliability and driver fatigue appeared to play a large part in this class, which is not surprising considering the Am drivers that compete in it. This class saw only three cars fail to make the chequered flag at the end of the race, which gives the Am class a better finishing ratio that the LMP1 class.

However, the advantage was in Porsche’s hands as they, once again, had the edge with the BoP. BoP was one of the reasons that Aston Martin didn’t appear to show up in either the Pro or Am classes. Neither of the Aston Martins managed to complete the race, due to mechanical failures and issues in the night portion of the race, which left a sour taste in the British team’s mouth, especially with the BoP not playing to their favour either. Paul Dalla Lana, Pedro Lamy and Mathias Lauda are still chasing their elusive Le Mans class victory.

The entire grid appeared to be somewhat of a 24-hour procession, which after the exciting races we’ve had in previous years, was a bit of a let down. The maximum lap cap also played a big part in this, as teams were not able to use safety car periods or fuel saving stints to any sort of advantage. When everyone can only run a certain amount of laps and they all start at the same time there is going to be no advantage to find during a pit stop or clever strategy.

The FIA World Endurance Championship is in a transition phase during the Super Season, so certain aspects may come under review as the season progresses. We’re confident that next year’s 24 Hours of Le Mans will be as riveting and thrilling, with some great on track battles, as it has been in years gone by.