Gamble honoured to be part of Porsche Goodwood celebrations

This week has been something of a whirlwind for Porsche Carrera Cup GB frontrunner George Gamble as he takes part in Porsche’s seventieth anniversary celebrations at the Goodwood Festival of Speed.

“It’s an honour  to represent Porsche on the seventy years,” said Gamble. “They’ve brought all of their cars from the museum and I’m honored to be able to drive the 961 1987 Le Mans car, it’s a real handful and I just took it up the Goodwood hill, it’s unbelievable.

Commenting on his first time at the Goodwood Festival of Speed, Gamble said, “I’m really thrown in the deep end, but what an amazing experience to be a part of. Just seeing the show that Porsche have put on, and brought they’ve everyone here, all the cars, all the race winning cars. So yeah it’s a real real scene here 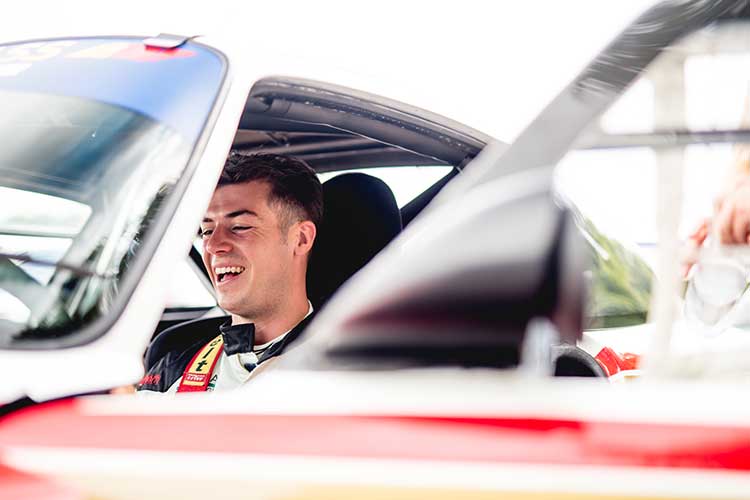 “Seventy years is a huge milestone for any company and to be a part of it, representing them at Goodwood, which is probably the biggest festival of the year for motorsport, it’s huge not just being a part of it, but driving it’s just a different thing altogether so yeah i’m absolutely blown away by it, it’s unbelievable.

With the last round at Oulton Park taking part at the beginning of June, Goodwood is the first time Gamble has been out in a racing car since.

“It’s been good to get my eye back in and I’m looking forward to Snetterton now, and going to be pushing on for the second half the season

Talking about the season so far Gamble has shown some impressive pace in his rookie season.

“We’ve had some major up and downs, from real high at Monza, that was amazing weekend and then some lows like a Donington, where we got disqualified from qualifying, but yeah on the whole it’s been beyond what I expected in the first half the season.

“Going in to Snetterton I’m feeling really positive, we’ve got the test on the Wednesday which is official test everyone’s there.

“We’ve got quite a bit of extra running there before, as opposed to a lot of the other rounds, so that’s definitely going to help the likes me and a few of the other rookie drivers to catch up with the with Pro’s, so looking forward to.”